Physics and the fallacy of the no ball argument

This is a short and light article, nothing to challenge Dr Sheldon Cooper or the like. I didn’t set the world on fire in my physics classes.

It is, however, a bit of a challenge for common sense to rise and less histrionics – especially from some commentators and journos.

I also meant to have this in before the first Test, but of course I was diverted by the working world and lightning struck. Thanks Ishant…

I’ve watched cricket for many years and over time have learned to expect that in these series there could be a no-ball wicket or two. What I haven’t learnt to live with is the response. There is regularly a verbal flogging of the bowler who is engaged in such an event, complete with a repetitious judgement of how the no-ball cost the wicket.

So let’s tackle this. Not every ‘no-ball’ that took a wicket would still have taken that wicket if the ball had been legal.

In fact, it’s probably likely to be very few.

Consider this: cricket is known to be a game of ‘inches’ (or centimetres to be correct, though metric measurements just don’t have the same ‘ring’ to it).

So if you sent the ball down at the right spot (instead of the no-ball delivery) it would, actually, hit the bat one-inch away from where it did.

One inch off a moving bat changes the trajectory massively. That snick to second slip flies through the empty fourth slip instead.

The ball arrives at the batsman in a different position, doing different things. The movement, spin, bounce are all affected as well as where the ball impacts with the bat.

That edge onto the stumps becomes a ‘French cut’, that cutter that comes back in and cleans up the stumps hits the ground at a different location and spot on the ball and doesn’t move.

So next time there is a no-ball wicket, don’t jump on the commentary bandwagon, castigating the bowler with tales of missed opportunity doesn’t cut it.

A no-ball wicket is not a guarantee of a legal ball wicket. Unless the ball was bowled, gun-barrel straight, and the batter didn’t play at it – or swung and missed by more than the length of the infringement and the ball hits pads plumb or cleans up the wickets – then it’s unlikely it would still be a wicket if the ball was legal.

The ball bowled by Ishant Sharma that was declared a no-ball would very likely have gone over the stumps if released an inch earlier.

So now with the Test over I can have my one paragraph review. I still dislike DRS, rules say ‘in opinion of the umpire’ yet some guy in a box adjudicates according to his own opinions in slow motion. And yet mistakes still happen – big ones.

One incident in the Test had the third umpire judging the appeal rather than determining if there was evidence to overturn the on field decision.

Congratulations to India yet our boys made it tough for them. To win this series though, we need to make some changes and I don’t pretend to know what they are. Moving Usman Khawaja to open isn’t the answer, you don’t strengthen a spot by weakening another. Good luck to the selectors.

Being agile and adapting quickly is taking on a whole new meaning for Australian quick Kane Richardson in the UAE’s furnace heat ahead of the T20 World Cup. 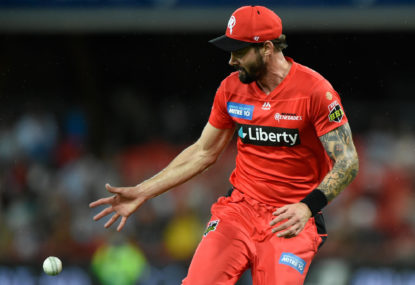