With one team on a ten-game losing run and the other having lost five straight, time is running out for the Cairns Taipans and New Zealand Breakers to get things on track in the NBL, making Sunday’s game a crucial one for both.

At 1-10, making a play-off run from here is going to take some effort for the Taipans, but another loss on their home floor on Sunday against the Breakers and remaining winless at Cairns Convention Centre to lose an 11th straight could make it impossible.

For the Breakers, a sixth straight defeat and slipping further from the top four would be a terrible result for a team that has shown an ability to match it with the top sides so far in the 2018-19 season.

That all sets the stage for a crucial battle in Cairns on Sunday, and any time you get a match-up comprising two teams that can’t afford to lose, the stakes rise. It’s always fascinating to see who stands up – and who doesn’t.

There are no shortage of players on either side familiar with the opposition. DJ Newbill and Rob Loe, now with the Taipans, played for the Breakers last season. Point guard Jarrod Kenny is a New Zealander and regular member of the Tall Blacks national team too.

Then on the other side of the spectrum is Jarrad Weeks, who emerged as a high-level NBL point guard the past two years with the Snakes before making the move this season to join the Taipans.

With plenty of players knowing their opponents well and with so much at stake, it should only heighten what already shapes as a game that could be season-defining for both clubs.

Weeks is in his first season in New Zealand and the 125-game NBL player is set to make his first return to Cairns on Sunday in a Breakers uniform.

He is doing so in the best form of his career as well, having averaged 13.7 points over the past three games despite the Breakers losing each of them. He also put up a career-best 19 points last Sunday in the one-point loss at home to the Sydney Kings.

Weeks has enjoyed being able to contribute strongly to the team, which he puts down to taking his coaching staff’s advice and being more aggressive, but ultimately all that matters is if the team wins or not.

“It’s always nice to see the ball go through the hoop, but I’d definitely rather be getting the wins for the team instead of that any day,” Weeks said.

“It’s a little bit of the shots falling, but I’ve tried to be more aggressive throughout the game. The assistants and KB (Kevin Braswell) have really been telling me that over the past few weeks and I’m starting to kind of put it into practice over the past few games.

“I think it’s benefited the team, and hopefully we can keep that going and start getting over the line to get some wins. In the system we play as a team – we are better when we’re pushing the ball and are aggressive and in that kind of mindset.

“That’s how I like to play as well, by getting up and down the floor, and I’m at my best when I’m being aggressive. So we’ve put the style that we play together as a group and it’s starting to show the benefits.”

As for his return to Cairns, Weeks has nothing but fond memories of his two years with the Snakes. But once the ball goes up on Sunday, there’s no room for sentiment, and his sole focus will be on breaking New Zealand’s losing run and trying to inflict an 11th straight defeat on the Taipans.

“It will be a bit of a strange feeling landing back in Cairns and I get off the plane, but at the moment I’m just focusing on our stuff at home,” Weeks said.

“But once we get there it will be a bit of a different feeling sort of returning home to where I spent the past two years. It will be good to see some of those guys again and to get back to Cairns, and it will be interesting to see what the crowd’s like on the other side again.

“This league is very tough and we’re going through our own losing streak at the moment, so there’s not really room for sentiment when it comes to teams you are playing against. I’m more focused on our team than theirs, but in this league if you don’t show up every night you get punished.

“It’s a really tough and tight league with only eight teams, so once that ball goes up I’ll be doing everything I can to give them an 11th straight loss, but I’m definitely not doing that with any hard feelings. I loved my time in Cairns.” 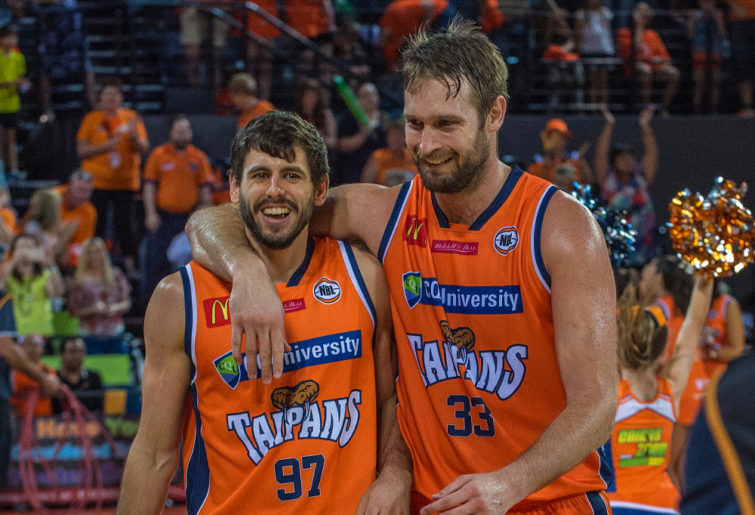 Jarrad Weeks during his time at the Taipans. (AAP Image/Brian Cassey)

Newbill will be looking to ensure New Zealand’s losing run does extend to six, though, and that the Taipans record their first win since downing the Bullets in Brisbane in their season-opener.

The Snakes are yet to win on their home floor this season, having lost twice to the Illawarra Hawks and once each to the Adelaide 36ers, Melbourne United and Perth Wildcats, meaning that Newbill is yet to taste a victory in Cairns playing for Cairns.

He has won once at Cairns Convention Centre, though – for the Breakers last season when he had ten points, four rebounds and four assists.

But he was then part of a loss for the Breakers in Cairns later in the season, so he has lost his last six games in the building in which he hopes on Sunday the Snakes can break their losing slide and potentially build some momentum.

Despite the ten-game losing run, Newbill has enjoyed that this Taipans team has stuck together, and he feels that as long as they continue to fight, it could just take one win to get things rolling.

“We’ll continue to come and fight and try to turn this thing around. I wouldn’t say it’s early, but we still have enough time to turn our season around and go away with some positives,” Newbill said.

“We have really formed a brotherhood even though we’ve only been together a short time. We’ve spent a lot of time just understanding each other and we all believe in each other so even when stuff’s not going right, we don’t care about that.

“We are going to stick together, we are going to keep coming out here competing and putting ourselves in positions to win some games.”

Newbill will look to come out aggressive from the start as well and try to do what he did when scoring 11 points in five minutes in the third quarter last Sunday in Perth for a lot longer period of the game this time around.

“Maybe I have to bring that energy in the first half, then I can’t wait til the second half to try to get myself going,” Newbill said.

“I should come out with that type of energy and effort from tip-off. That’s something I have to reassess with myself. But other than that, I’m just coming out to try and play hard and help us get wins as a team.

“Every guy has to assess themselves and when we come out for the game, we understand we have a task at hand and we have a chance to come out and play.

“The season’s not over, we have a lot of games left and we just have to take that opportunity to come out and play together, and give ourselves the chance to win.”