Socceroos coach Graham Arnold has revealed the 23-player contingent he’ll be taking to the UAE for the Asian Cup next month, as Australia try to defend their 2015 title.

Arnold has elected to name Aaron Mooy in the squad despite earlier reports a knee injury suffered in the Premier League would keep him out of the tournament.

In a press release, the Socceroos said Phil Coles – the FFA’s senior physiotherapist – would assess Mooy’s injury independently later this week and would provide an additional update on Christmas Day (Australian time).

As per AFC regulations, Australia have until 4pm (AEDT) on Sunday, January 6 – six hours before their first match- to make a definitive decision on Mooy. 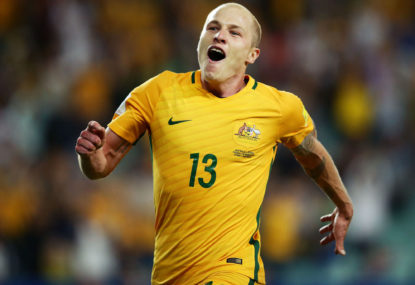 'Tis the season for giving, and the Socceroos' Asian Cup squad is giving us hope

In the press conference, Arnold claimed it was Mooy himself who wanted to go the Asian Cup and had subsequently requested a second opinion from the FFA’s medical team.

The next-most notable news is arguably the players who didn’t make the cut, with Adelaide United gun Craig Goodwin being snubbed, and maligned striker Tomi Juric also getting dropped.

Instead, the Socceroos have elected to take Martin Boyle (who only applied for an Australian passport in March), Andrew Nabbout and Jamie Maclaren as the set of strikers.

Star Melbourne Victory duo James Troisi and Terry Antonis have also not made the cut. Antonis is widely tipped to be the man who’ll replace Mooy, however, if the Huddersfield midfielder succumbs to his injury.

Overall, it’s a young squad that will take the field in January, with the average age of the travelling players just 26.

Just the three A-League players will be heading over too, with the aforementioned Grant and Ikonomidis joining Western Sydney’s Josh Risdon on the plane.

Arnold was bullish of his side’s chances of tasting success next month, despite 15 members of the 23 man squad playing in the tournament for the very first time.

“Our squad for the upcoming AFC Asian Cup in the UAE blends youth with experience,” Arnold said.

“I know that Australia will enter the Asian Cup with the best camaraderie in the competition.

“In the short amount of time I have had in charge I feel that we have come a long way, and we will travel to the UAE expecting to win every match and ultimately lift the trophy in early February in Abu Dhabi,” he added.

Australia’s Asian Cup campaign kicks off on Sunday, January 6 at 10pm (AEDT), when they clash with Jordan. You can view the full Asian Cup fixtures here.