The scene is in Brussels, less than 24 hours after Belgium’s Red Lions, the men’s field hockey team had secured the country’s first ever World Cup title.

As members of the team held aloft the cup, painted was a picture of the ability of one team, one nation and the hockey community to plan, succeed and celebrate.

It was Belgium’s first and only top-four finish in the 14 editions of the International Hockey Federations (FIH) World Cup, done without John-John Dohmen, FIH world player of the year in 2016, who departed after only two games with pneumonia.

Rewind ten years, to 2008, and the Belgian national team had competed at their first Olympic Games in 32 years. They finished the year ranked tenth, their highest position since the rankings began in 2003, but they were nowhere near the top teams, as results against traditional powerhouses Australia, Germany and the Netherlands showed.

It was about this time that Belgian hockey received an influx of quality coaches from Australia into various roles and with various personal goals. Adam Commens was appointed head coach in 2008, having been a player and coach at Royal Antwerp Hockey Club (RAHC); Colin Batch, having missed out on being appointed head coach of the Kookaburras following Barry Dancer’s retirement, joined KHC Dragons as head coach in 2009; John Bessell, a former New South Wales Institute of Sport coach, took on the performance analysis role for the Belgian Federation in 2009 and the head coaching reigns at La Gantoise in 2010; and David Viner arrived at Royal Uccle Sport as head coach in the same year.

Here's what it's like to sing Brabançonne A Capella with 6000 compatriots. Thank you Belgium, Thank you fans! <3 #RoarTogether #WorldChampions pic.twitter.com/8N6jD2v1CL

Murray Richards, who had also played at RAHC since 2001, had been an assistant coach for the national team, had coached the under-21s national team and had coached the Belgian women’s team before moving into high performance roles for the Belgian federation in 2011, was a key mover in developing the players and system that brought success in 2018.

These imports brought with them the ‘Australian way’ – something that European hockey had resisted. They brought high-pressing, fast counterattacking and flair. With these traits came fast improvements on the club scene, where Colin Batch’s KHC Dragons caused the upset of the EuroHockey League in 2011 by defeating reigning champions Rot-Weiss Cologne before being beaten in the knockout Round of 8.

The following year the Dragons finished third in the EHL. Batch had moved on to the head coach role of the Belgian men’s team after Adam Commens had returned to Australia to coach the Hockeyroos.

For a small country it was easy to put into place programs whereby players could complete centralised training. Most players lived no more than an hour from the major hubs of Brussels or Antwerp. The programs put in place would allow quality coaches, not just the Australians), to refine skills as well as provide high performance knowledge and expertise for players starting as young as 14, while the national teams – under-14s, under-16s, under-18s and under-21s – would begin to reap the benefits at European tournaments. BeGold was the program that led the way.

Improved results began to flow internationally, initially in Europe, where the biennial European Championships saw Belgium start to make further strides. Traditionally the top four positions have been dominated by England, Germany, Netherlands and Spain, but Belgium became a regular top-four team following a fourth-place finish in 2005, with two silver medals (2013 and 2017) and a bronze medal (2007) to show from the following six events.

Outside of Europe Colin Batch had the national team moments away from qualifying for the medal round at the 2012 London Olympic Games, with New Zealand leading Germany 5-4 inside the last minute before a Christopher Zeller field goal tied the game and sent Germany through at the expense of Belgium. Germany went on to claim the gold medal while Belgium finished fifth.

Chief Coach of @BELRedLions, Shane Mcleod, lauds the efforts of his coaching staff and Belgian hockey authorities for grooming a young crop of hockey players who've sprung up and are leaving their mark at the biggest level of them all. #ENGvBEL #IndiaKaGame #HWC2018 #DilHockey pic.twitter.com/7NA0pUdZAl

In fact Belgium more often than not found themselves in the FIH Champions Challenge I, the next tier down from the Champions Trophy, where they had only two top-four finishes, winning in 2011 to gain promotion to the 2012 Champions Trophy.

Colin Batch left at the end of 2012 and was replaced by Dutchman Marc Lammers. Lammers’s time in charge did not see the same success on the international stage. The 2014 World Cup saw England progress to the medal round at the expense of Belgium in the last pool game. The team, however, claimed fifth place with a 4-2 win over Germany. Lammers departed following the World Cup and was replaced by his assistant, Jeroen Delmee.

A runner-up finish in the 2015 FIH World League, now the FIH Pro League, was a precursor to the most successful era of Belgian hockey. Shane McLeod, a New Zealander, was appointed head coach in October 2015. In 2016 Dohmen was named world player of the year and Arthur Van Doren was named young player of the year. The 2016 Olympic Games also saw them make their first major final, walking away from Rio with a silver medal, but they were also disappointed to go one better.

Finally, 2018 delivered. For a nation of 10 million people to claim the World Cup was historic. To do it with a quarter-final win over Germany and a 6-0 thrashing of England in the semi-final was commanding. But to do it without captain John-John Dohmen in a sudden death penalty shootout over nearest rivals the Netherlands was dramatic.

While wild celebrations engulfed most of the team after their dramatic penalty shootout win, there were moments of reflection and grief. Less than 24 hours before their semi-final win over England Simon Gougnard’s father passed away suddenly. His roommate, Tom Boon, clearly overcome with emotion, showed that elite athletes are human. His compassionate embrace with Gougnard after the final will long be remembered.

Belgium have shown the world that their systems can reap benefits. Though they were the building blocks, little has been said of the five head coaches in ten years – but perhaps the systems needed different voices at different times, and perhaps the unity needed by the players was the glue. Shane McLeod just might have been the cherry on top. 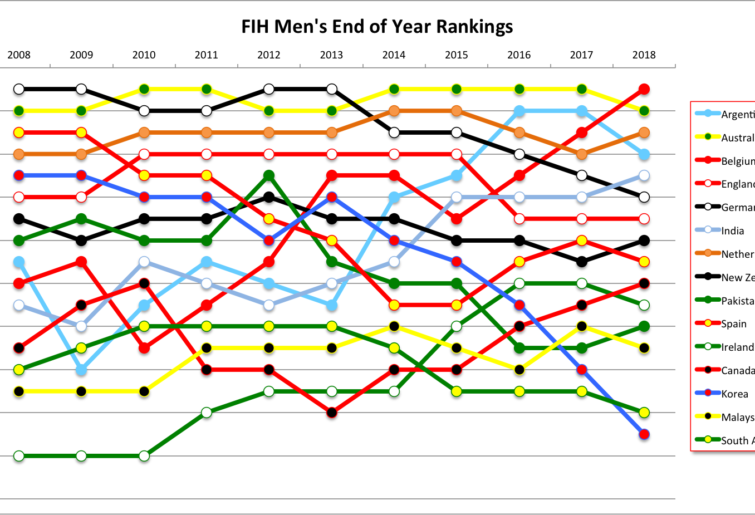