It's time the FFA reconsidered its 'metrics'

The FFA seems to have found a new buzzword as it tries to navigate through challenging times.

‘Metrics’ is a word seemingly used ad nauseam as a kind of smokescreen that apparently needs no clarification or justification – a perfect device that perfectly reflects the attitude and workings of a governing body that is very quickly driving our beloved game into the ground.

Culture starts at the top. When management’s values, goals and sense of culture are fundamentally different from its constituents you have a problem – a problem that has ballooned in a multifaceted failure that is feeding off itself and conspiring to drag our game down.

The FFA’s strategic model is fundamentally flawed, and it is from this model that everything else flows. It is a business-driven model, not a fan or football-driven model.

Fans are not treated as fans but as customers. If the product is bad, why should they turn up?

Fans want passion, community, family and atmosphere. They don’t want to hear talk of franchises, metrics, financial targets or club brands. When suits from the FFA talk in front of a camera are they speaking to fans or to existing and prospective sponsors? Or do they think they are communicating with shareholders in a publically listed company?

The FFA’s business model therefore sets the tone for how it communicates with the game’s fans, and from the get-go it doesn’t speak the language or appreciate the values the fans hold dear. Immediately there is a disconnect.

When Craig Foster was running for the FFA board he stressed the importance of having a fan-based model. Sadly this was to his detriment. So geared is the FFA to following a business-based model that it fails to recognise football’s strengths that make it unique.

Football is a tool for change. We were the first competition in Australia to have a national league. We were the first code to have the national anthem played at an international match. We were the only code to send our team to Vietnam. We are a world game with global appeal and an unmatched atmosphere. We unite all cultures and assist in the integration of hundreds of thousands of migrants into our great nation.

Is this understood by the FFA? Comments from the FFA’s head of A-League, Greg O’Rourke, that he wants to see a more “Big Bash” atmosphere, which includes music during corners and throw-ins, shows that not only does the governing body not understand it, but they are hellbent on disrespecting our game by trying to make football into a second-rate version of the Big Bash League or the NRL. Anyone up for wearing KFC buckets on their heads? 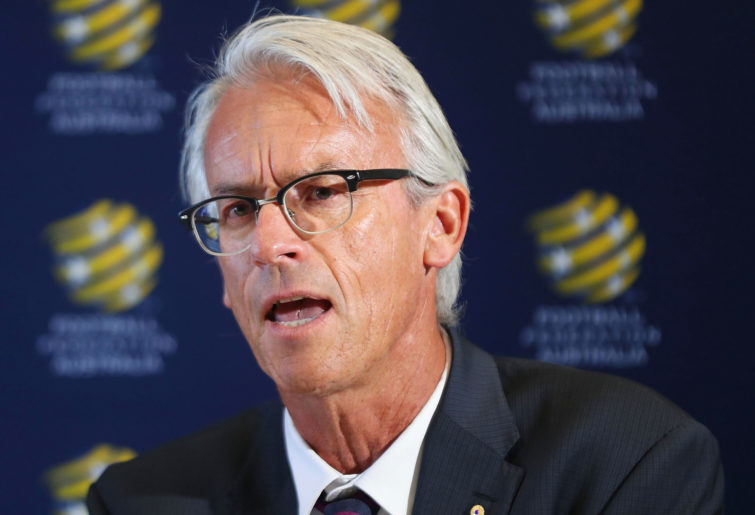 This disconnect was further demonstrated by David Gallop’s comments during a fan forum when he stated he envisioned the Socceroos active support to be in the mould of State of Origin’s Blatchys Blues. Care to add a blue wig to your KFC bucket, anyone?

So clueless are the FFA in growing our game that the FFA expressed its surprise at the 30-plus per cent decline in TV ratings. To express surprise at this must means one is either in denial or incompetent.

So what are these metrics the FFA talks about? Well, no-one knows. These supposed metrics are applied to the Wellington Phoenix. If they fail to meet them, they are out. Well, one would assume these metrics are also applied to all teams. By that logic wouldn’t the future of the Central Coast Mariners also be in doubt?

There is no logic. ‘Metrics’ is a convenient excuse to give Phoenix the boot.

So in an environment of shrinking crowds, falling ratings and serious governance issues the FFA have opted to add two new teams to expand the league, but there are serious problems with this way forward.

Firstly, adding two new teams to a competition in decline run by an inept governing body is like trying to build a home on a base of sand.

Secondly, adding a team from Melbourne and Sydney is diluting, not expanding, the A-League. Melbourne City struggle for crowds as it is. What do we think adding a third team in Melbourne will do?

Thirdly, the two new teams are being set up in ‘growth corridors’, meaning it will be years before these respective areas have the population to sustain decent crowds. Is the FFA willing to support these teams until then?

Again we come back to the destructive business model. The FFA, in part due to its ongoing failings, need cash. Foxtel wanted teams in our major metropolitan areas. The fans – well, their needs are down the priority list. Last I checked there weren’t tens of thousands of fans in Campbelltown screaming for a new team.

Is it any wonder fans are turning their backs on the game? Active support, one of the greatest assets and attractions for new fans, is struggling to survive. Football fans are not just spectators; they are supporters. They are socially conscious, active and not customers who will sit down, shut up and just buy merchandise. We are losing rusted-on fans in the FFA’s failed attempt to bring on ‘events fans’ who will leave for the next big thing.

Our junior system, the lifeblood of the game, is in tatters. Exorbitant fees is the first problem, and another is the FFA-imposed rigid 4-4-2 system that is raising a generation of youngsters who don’t understand other systems and are deficient in tackling and defensive work – and, as we have seen, lack the ability to score!

The strategy is flawed and the problems are many, yet they will continue to multiply and worsen until we have a fundamental shift in not only how the game is run but how it is appreciated in this country.

We don’t know what metrics the FFA are using but by the metrics used by the fans to measure the FFA our governing body is clearly failing.