With this year’s Australian Open getting underway in two days, here’s a look at six players who I expect to make an impact.

I haven’t included the obvious contenders here, like the men’s ‘Big 3’ or Serena Williams; rather, the players I’ve chosen are perhaps lesser known outside of tennis circles but are either rising stars or upper echelon players who are perhaps less considered as title chances.

Karolina Pliskova – ranked/seeded 7
Long touted as a future Grand Slam winner, Pliskova last year firmly entrenched herself firmly in the top ten with titles in Stuttgart and Tokyo, a run to the Australian Open and US Open quarter-finals and a semi-final loss to Sloane Stephens at the season-ending WTA Championships in Singapore.

She’s in excellent form coming into the tournament, winning the title in Brisbane last weekend, and should benefit from a kind draw next week, opening against a qualifier with tenth seed Daria Kasatkina a possible fourth-round opponent.

Pliskova consistently defeats her top-ten peers, and none of them would want to come up against her on a quick hard court surface (which the Open typically is), with her powerful serve a massive weapon. Her form at Slams has been more consistent over the past few years, and I’m backing her to make a deep run here. 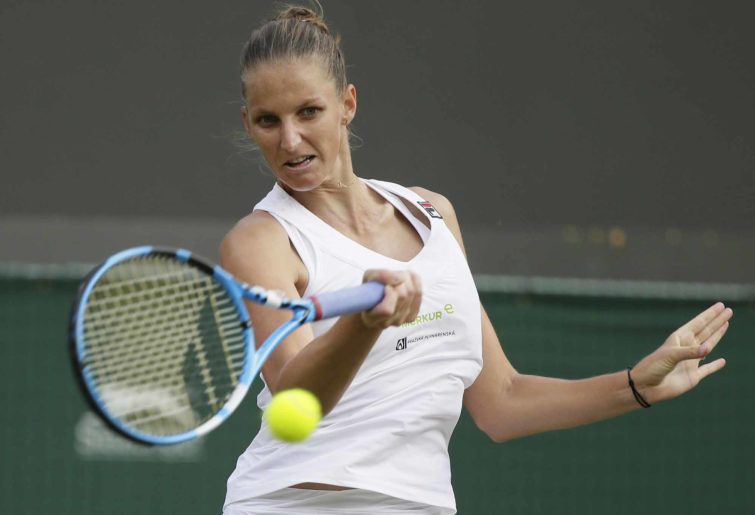 Angelique Kerber – ranked and seeded 2
The 2016 champion here, Kerber rebounded from a disappointing 2017 with an astonishing 2018 season, in which she claimed the #2 ranking, won her third Slam title – this time at Wimbledon – and made the semi-finals here, won Sydney and made at least the quarter-finals at seven other tournaments.

She comes into the Open having steered Germany to the brink of victory in last week’s Hopman Cup, and reaching the semi-final in Sydney. The highest seed she’s likely to face up to the fourth round is compatriot Julia Goerges (14), so she’s well placed to emulate last year’s semi-final run.

Aryna Sabalenka – ranked and seeded 11
This time last year, hardly anyone had heard of the 20-yeard Belarussian, but 12 months later she returns as the rising star of women’s tennis. After starting 2018 with a quarter-final run in Hobart, she had mixed form throughout first-half of the year, but also won New Haven and Wuhan, made two other finals and reached the fourth round at the US Open.

That set her up for an excellent second-half of the year, culminating in her inclusion in the WTA Elite Trophy season-ending tournament (for the players ranked 9-16 in the world). She has a gentle draw until the fourth round when she could meet eighth seed Petra Kvitova. Sabalenka has one of the biggest games in women’s tennis – don’t be surprised if she causes a number of upsets along the way.

Wildcard
Watch out for Russian Ekaterina Makarova. Ranked 57 this year, but no matter her ranking, she loves playing here, and has the results to prove it: a semi-final appearance in 2015, two quarter-finals and four fourth-rounds.

Must-watch first-round matches
Simona Halep v Kaia Kanepi – this is a horror first assignment for Halep. Kanepi has been injury plagued and inconsistent in her career, but when she puts it together – as is often the case at Slams – she’s a formidable opponent. Like Nick Kyrgios on the men’s side, Kanepi can be the most dangerous floater in the draw.

Maria Sakkari v Jelena Ostapenko – the former French Open champion against the rising Greek star. Sakkari has been in good form to start the year, playing well at the Hopman Cup, while Ostapenko lost to Ash Barty in the first round of Sydney. Both hit the ball hard and have similar game styles, so this could be a cracker.

Kei Nishikori – ranked and seeded 9
Nishikori starts the year fully fit for the first time in a long time. He missed the whole Australian summer last year with injury, but rebounded to win one title, made the final of three others and performed extremely well at the other Slams, reaching the fourth round at the French, quarter-finals at Wimbledon and semi-finals at the US Open (where all his opponents were ranked inside the top-50).

He’s coming off excellent form, having triumphed in Brisbane last week (incidentally, his first title in three years), and has a favourable Open draw, with 12th seed Fabio Fognini his likely fourth-round opponent.

Stefanos Tsitsipas – ranked and seeded 14
The 20-year-old soared up the ATP rankings last year, winning Stockholm and the Next generation finals in Milan, making the fourth round of Wimbledon and reaching three other finals, including the Masters 1000 Tournament in Toronto, where he made an extraordinary run that included wins over four consecutive top-ten players.

He’s coming off good form at the Hopman Cup but has a tough draw, which could pit him against Federer in the fourth round. Regardless, expect Tsitsipas to acquit himself well – we’re likely seeing a future grand-slam champion.

Daniil Medvedev – ranked and seeded 15
The 22-year-old is another of the ATP’s rising stars and has an excellent opportunity to advance past the third round of a Slam for the first time. He comes in in excellent form as a finalist at Brisbane last week and will be buoyed by the form that saw him win three tournaments and saw his ranking rise from 65 to inside the top 20.

He’s been drawn in the same quarter of the draw as Novak Djokovic and could face either fellow rising star Denis Shapovalov, or 21st seed David Goffin, in the third round, giving him a challenging assignment. But good early season form counts for a lot at the first major of the year, so don’t be surprised if he causes a few upsets.

Must-watch first-round matches
Kyrgios v Milos Raonic – This could either be a cracker, or a fizzer – hard to know when NK is playing. Safe to say, though, that Kyrgios is the unseeded player opponents would least like to face early on.

Andy Murray v Roberto Bautista-Agut – Could, sadly, be Murray’s last professional match, which would be an extremely sad way to end an incredibly fine career.