Glory and fame: Is the Essendon hype justified?

If Essendon doesn’t win the premiership in 2019, the club’s longest premiership drought of 19 years will be equalled.

For a founding member of the eight-team breakaway Victorian Football League in 1897, a 19-year drought is a rather modest hiatus between premierships.

For the record, Essendon’s previous longest drought between premiership flags come from 1965 to 1984, an almost two-decade wait between the club’s twelfth and thirteenth premierships.

When considering two of the last three premiership teams have erased droughts of 62 (Western Bulldogs) and 37 (Richmond) years, the Bombers drought of 19 seems even more astonishing.

On average, the Bombers have won a VFL/AFL premiership every 7.5 years – a number bested only by the Brisbane Lions (7.33) and bitter rivals Hawthorn (7.23) – and have on average appeared in grand finals once every four years – second best to only Collingwood (2.9).

Since the club’s record-equalling sixteenth premiership in the first year of the new millennium, there’s been little to cheer about for Dons fans.

However, there are few teams rolling into the new season with more hype than the Bombers.

Many AFL pundits would agree with the summation that the Bombers were the best team left on the outside looking in last season.

The Bombers won eight of their final eleven games to close out 2018, with two of those losses being nail-biting defeats to Hawthorn and top of the ladder Richmond.

The Bombers averaged just under fifteen goals a game in those eight wins, with a forward line absent of its most important player in Joe Daniher, as well as being without diminutive small forward Orazio Fantasia for most.

Frustratingly for Dons fans, every impressive performance against Richmond or eventual premier West Coast was void by incomprehensible losses to Fremantle and, of all teams, Carlton. 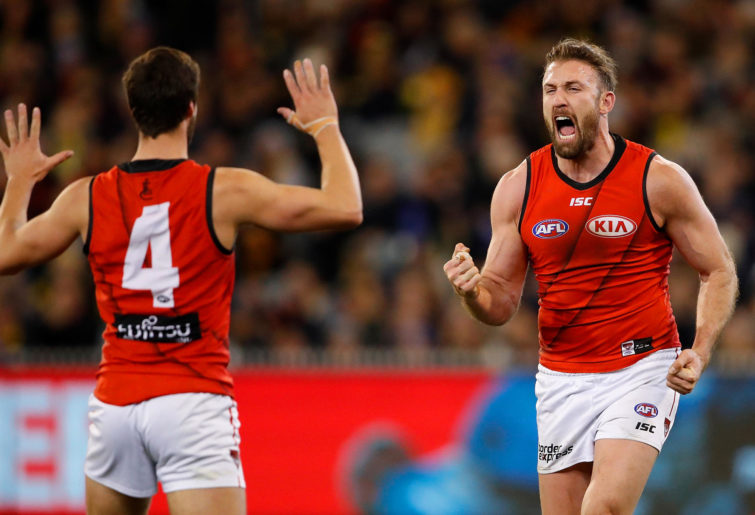 While this inconsistency in performance has been one of the major knocks on the Bombers of recent times, so too has their lack of midfield talent.

Devon Smith was a revelation in 2018 – and was extremely unlucky to miss out on the final All-Australian team – though fellow former Giant Dylan Shiel is the big-ticket offseason acquisition that will be expected to aid a fledgeling midfield group that finished twelfth in average contested possessions (143.4) and tenth in clearances (36.8) in 2018.

Coach John Worsfold and Bombers fans will also be banking on plenty of improvement from within this season, after the impressive strides made in 2018 by youngsters Andrew McGrath (20 games), Aaron Francis (5), Kyle Langford (16) and Matt Guelfi (15).

There doesn’t seem to be too many in the football world that doubt Essendon’s weaponry at either end of the ground. If the midfield group can make the necessary improvements, this will quickly become a formidable Essendon side, at least on paper.

Though the Bombers hold the record for most premierships with Carlton (16), they also ironically hold the current record for longest active drought between finals wins. Every team in the league besides the Gold Coast have won a finals match since Essendon last tasted September victory in 2004.

Essendon have built a seriously competitive list, and are far enough removed now from the repercussions of the supplement saga to consider their list capable of taking them deep into September.

The last three premiers have gone from relative preseason obscurity to hoisting the cup in the middle of the MCG.

For the boys who play this grand old game, could 2019 be the drought-breaker?