What in the world happened to the Wanderers, Roar and Mariners?

As Mark Rudan does cartwheels down the streets of Wellington and Perth Glory fans salivate at the idea of a championship returning to the west, others appear to be crumbling.

The usual suspects have poked their noses into the A-League fray. Sydney FC have successfully moved into the post-Graham Arnold dimension and Melbourne City have somehow navigated their way into the top four without a certain Uruguayan.

Melbourne Victory nailed player acquisition to further strengthen their squad and look to be headed to the big dance once again.

Perth Glory were touted as big improvers under Tony Popovic and Wellington are surprising people on a weekly basis. Both clubs have elevated themselves into contention off the back of nothing more than sparkling play on the pitch and the work of the two committed and talented managers at their helms.

Throw in the respectable and steady improvement of Adelaide and a somewhat unlucky Newcastle Jets team; unable to take a trick, win a break or find the net and the top seven teams in the A-League are grappling with each other for points.

Some would argue that that situation should never arise in a salary-capped and financially restricted competition. Whilst somewhat overly simplistic, that line of thinking does have some merit, despite the greater access to resources in Australia’s two biggest cities and in turn, the buying power that it brings.

Watching three teams rack up a grand total of three wins between them over the course of the first 13 rounds of the season is not something from which any fan of the domestic product should take pleasure.

Having written previously about the importance of all ten franchises contributing to the steady growth of the league, it pains me to see the Mariners, Roar and Wanderers in the positions they now find themselves.

There are, no doubt, a variety of reasons for their declines on the pitch. Recruitment has played a role, as has managerial movement and injuries, yet in the cold reality of professional football, their falls from grace cannot be lessened with excuses.

The Western Sydney Wanderers climbed the heights of Asian club football in 2014. By 2015/16, average crowds of 17,746 were flocking to their matches, the growth seemed potentially exponential and Sydney FC were trembling.

Then, a professional and diligent manager chose to follow his international aspirations, some key personnel moved on and the club spiralled.

The RBB has boycotted at times; a fractured group often misrepresented in mainstream media, yet one that the team needs now, more than ever. The Wanderers have now won just 18 of their last 67 A-League matches and fans have lost any scent of semi-final play.

The Brisbane Roar have a single win in 2018-19 and frankly, haven’t deserved too many more. In just five years, the club that dominated Australian football from 2010/11 to 2013/14 has slumped to the depths of the ladder and their play is ponderous at best.

Roar will long be remembered as Ange Postecoglou’s team. Their play was crisp, aggressive and bright; their successes multiple. Mike Mulvey guided the club to the third of their championships during that era and after an interim period, management appointed Australian legend John Aloisi in 2015.

Despite little or no managerial success of which to speak, Aloisi’s task was to lead the team into a new era of success. After inheriting a decent roster, the new manager was able to steer the team to top-six finishes in his first two seasons, yet cracks were opening.

A myriad of reasons were offered up as the steady slide began. Injuries played a role, recruitment seemed questionable at times and despite a mad-capped run that brought a sixth-place finish in 2017-18, the doubters were to be proven correct.

So ingrained was the decline that Aloisi fell on his sword last month and little appears to have changed.

At this current point in time, the Roar have lost 20 and drawn nine of their last 40 matches.

Sitting bottom, the Central Coast Mariners managed to blow another early lead against the Phoenix on Saturday. Kye Rowles’ send-off brought a flood of goals for the Phoenix; with two penalties to Roy Krishna and a 65th-minute winner to David Williams sending the Mariners to their tenth loss of the season.

It was potentially the last straw for many fans, frustrated by a team that appears headed for its third wooden spoon in four years.

After the glory of a 2012/13 Championship that exorcised the demons of three previous grand final losses, former manager Graham Arnold went abroad. Since, the Mariners have been an abject failure. Phil Moss was able to guide the team to the finals initially, yet in his first full season in charge the proverbial wheels fell off and frankly, the mechanics are yet to get them back on.

The sustained period of failure that followed currently stands at 18 wins from their last 121 matches and has been overseen by a sequence of managers of which Mike Mulvey is the latest. 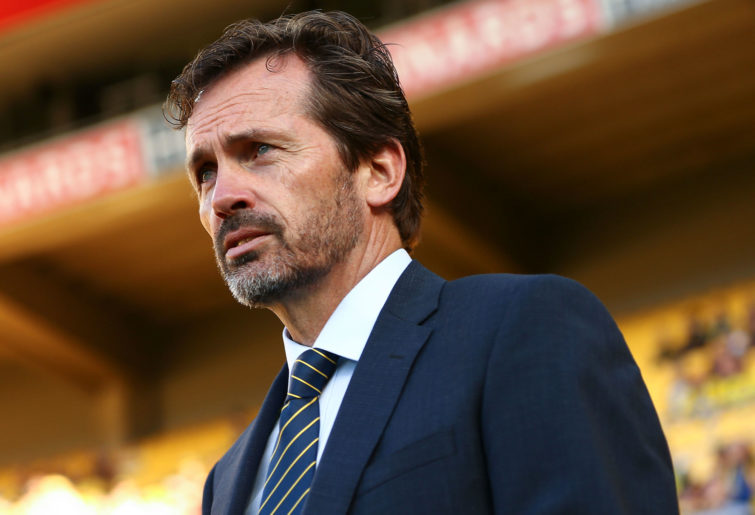 Even an off-season personnel clean out that reeked of significant change and a line in the sand approach hasn’t worked and the Mariners find themselves as the butt of many an A-League joke right now.

Those jokes don’t help. The A-League needs Gosford; both the region and the team. It needs a revitalised Brisbane that represents Australia’s third largest City and a successful Wanderers team that reads 50 per cent of the script when it comes to the A-League’s most anticipated derby.

Seeing all three in the pits helps no one.