Is John Morris too nice to coach the Sharks?

John Morris was one of those unsung-hero types throughout his NRL career.​

A Scone boy, he started his career at the Knights in 2001, but with a couple of blokes named Andrew Johns and Danny Buderus ahead of him as the club’s respective halfback and hooker, he made the move to Parramatta ahead of the 2003 season.​

(In fact, he ended up playing 117 games straight for the Eels, Tigers and then Cronulla.)​

His final years were spent at the Sharks, the only club where he managed to chalk up a century of games, in a career that netted exactly 300 first-grade appearances.​

The magic 300 club – a milestone that only a handful have achieved. ​

Along the way, he played every position on the park, bar prop – a great indicator of someone with a firm ‘team first’ attitude.​

And throughout it all, Morris just quietly went about his business. Never the most talented player, he instead had a great work ethic and squeezed every last drop of talent out of himself.​

All of which is to say he’s exactly the kind of player who ends up making for a great coach.​

So while his promotion at Cronulla may have come earlier than expected, as a result of Shane Flanagan’s deregistration, it’s no great surprise to see Morris getting a head coaching gig in the NRL.​

But I wonder whether this is the right fit for him.​

Having been part of the coaching set up at Cronulla since his retirement in 2014, Morris knows the club, its players and systems as well as anyone.​

He also, surely, knows its attitude.​

With Flanagan and Paul Gallen setting the tone, the Sharks have spent the past four or so years – since the fiasco that was their ASADA-plagued 2014 season – with a serious chip on their shoulders.​

Andrew Fifita is the ultimate rugby league enigma – he has the patience of a four-year-old, the temperament of a 14-year-old, the gut of 44-year-old, and he’s one of the best props in the world. ​His attitude simply wouldn’t be tolerated anywhere else, yet even when he pointed directly at the coaches’ box and gave them a mouthful midway through a game last season, Flanagan and his staff were happy for him to suit up again the following week.​ 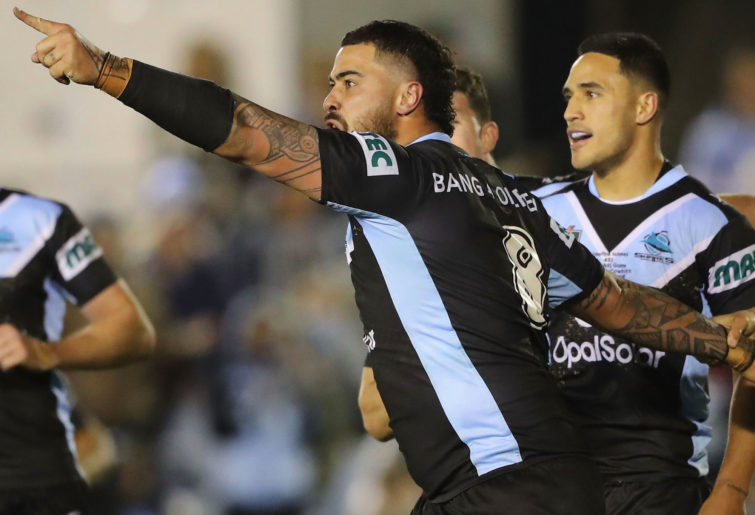 Wade Graham is lauded for his cunning and guile, is in the top-tier of best ball-playing backrowers and has certainly come a long way off the field since his “I’m not here to paint a f–king picture” heyday.​ But he’s still the bloke who cheated on a coin toss and laughed about it later.

Is that really the kind of example the captain of your team should be setting? Flanagan seemed to think so, saying Graham was simply “too smart for them”.​
​
I don’t think I really need to go rattle off Paul Gallen’s rap sheet – suffice to say it’s lengthy.​

Yet Gallen, Graham and Fifita are the three men that Flanagan puts forward as his captains – his team’s leaders – on a weekly basis. ​

And so what? The proof is in the pudding – this pride in grubbiness has paid massive dividends, the Sharks having played finals footy every year since 2015 and famously bringing home a first-ever grand final victory in 2016.​

By not only endorsing but encouraging a ‘f–k you’ attitude, Flanagan took the Sharks from ASADA-smashed wooden spooners to perennial title threats.​

Clearly, it’s what works for the players at the club. ​

But will it work for John Morris?​

Sure, he spent the last five years of his playing career in the Shire, but that was a time of flux, with four coaches in charge during that period – Morris actually wrapped up during James Shepherd’s brief tenure. The present attitudes were hardly set.​

And yes, he’s been a loyal lieutenant to Flanagan, but an assistant coach rarely sets the tone. In fact, it’s generally seen as a better idea for the assistant to be a completely different kind of coach to the head honcho – it helps for the boss to occasionally be offered a different point of view.​

Furthermore, Morris is never going to succeed trying to be ‘Flanno-lite’ – and he surely knows that. He needs to be his own man.​

I just wonder whether he’s got the personality to get this club to fire. Whether he’s sufficiently scum-bag enough to get a team full of grubs to play at their bastardly, brilliant best.​

In the simplest of terms, whether this ‘goodie’ can get a team of ‘baddies’ to win.​

While I struggle to root for the Sharks, I want to get behind Johnny Morris. But I worry that a clash of personalities will see him end up as a one-season wonder.