The year is 2019 and as the ten-year challenge takes social media by storm, the Australian ODI side has opted to take it to the next level by playing a brand of cricket more akin to 2009.

In an era where team totals are regularly exceeding of the previously vaunted 300 mark, the defending world champions achieved this just three times in 13 innings’ in 2018, for scores of 304 (twice) and 310. Their average total for the calendar year was a meagre 249.1.

For comparison, England, ranked first on the ICC rankings for ODIs, achieved the 300 mark eight times, including a blistering 6/481 against the Aussies in June, setting a new record team score in the process.

However, this is not the only area where Australia is falling behind when it comes to the white ball.

Where Australia continues to back their battery of excellent quick bowlers, other sides have embraced the use of a regular spin bowler (or two).

The likes of Adil Rashid, Kuldeep Yadav, Rashid Khan, Imran Tahir and Mitchell Santner have been steady contributors to their respective sides in recent years, not only serving as wicket-taking threats but as momentum shifters and run-restrictors.

Which brings us to Adam Zampa, who was surprisingly overlooked for much of the recent series against India in favour of Nathan Lyon.

Since Zampa made his ODI debut in 2016, a year in which his 30 wickets were more than anyone in ODIs that year, no Australian spinner has played more ODIs than him. But despite being anointed as the designated white ball spinner, there’s now uncertainty surrounding his position in the side.

His career numbers of 42 wickets at 37 aren’t at the same level as the aforementioned trio of Khan, Yadav and Rashid. However his economy rate of 5.6 means that he, like the others, concedes less than a run per ball, and can build pressure through dot-balls and being difficult to get away by turning the ball both ways.

On Friday, when he was picked for the third and deciding match of the series, his ten overs yielded just 34 runs and zero boundaries, despite bowling to two of the greatest to have played the format in Virat Kohli and MS Dhoni.

The composure and control that he showed throughout his spell had Shane Warne singing his praises on Fox, and Justin Langer told the media post-game that he was “most impressed” with his performance.

His success against India in 50 over cricket followed his performances in the T20’s against them earlier in the summer, where he claimed figures of 2/22 and 1/22 from his two spells.

While T20 form doesn’t always translate to ODIs, it would no-doubt have been a confidence booster to dismiss Kohli in Brisbane.

Zampa has had a taste of playing in English conditions, and crucially understands what it takes to succeed, after an excellent campaign for Essex in the T20 Blast in 2018, where his 12 wickets at an economy of 7.9 made him their leading wicket-taker for the season.

If there’s one thing that opposition sides could learn from England’s disastrous 2015 World Cup campaign, where they were knocked-out in the group stage, it’s the need for a varied bowling group.

Five like-for-like right-arm seam bowlers and two right-arm off-spinners made for an attack that reeked of predictability was able to be picked-apart.

Aside from one (Mitchell Starc), possibly two (Jason Behrendorff would have to be in consideration) left-armers, who’s to say that the attack that we all expect (Josh Hazlewood, Pat Cummins, etc.) without the option of Zampa is all that dissimilar to what England’s was?

The alternative, as floated by Langer, Aaron Finch and Trevor Hohns in recent weeks is to include both Lyon and Zampa in the side as a duel-spin threat. Hohns’ justification for Lyon’s selection in the squad made particular reference to the success other sides have had with this approach.

“Nathan is the best off-spin bowler in the world and we’ve noted how successful teams around the world have been using a two pronged spin attack in the right conditions in white ball cricket, something we are very mindful of heading to the World Cup,” Hohns said, when the squad was announced. 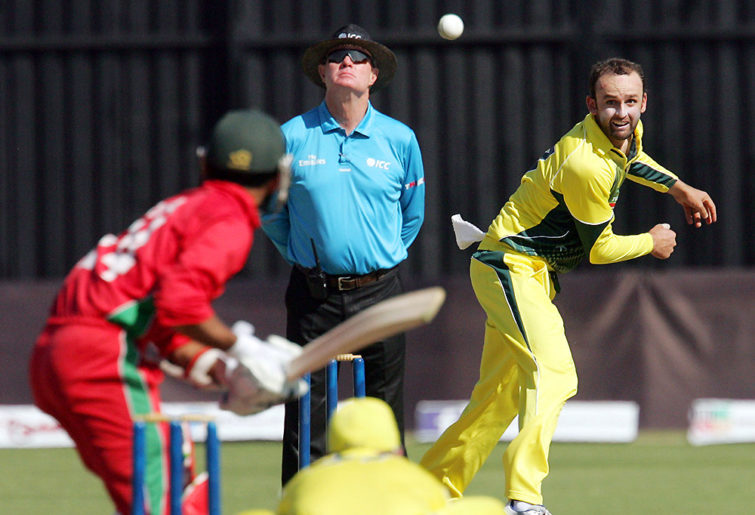 Following the loss in Melbourne, Langer confirmed that should conditions suit, they would be likely to Test the option in the upcoming subcontinental fixtures ahead of the World Cup.
“I think it would depend on the opposition,” Langer said.

“We don’t traditionally play two spinners, Australians in one day cricket, but it might come up in the World Cup.”

“Certainly in India and the UAE, there’s a good chance that’ll happen.”

There are now just ten scheduled matches before Australia faces Afghanistan in Bristol to open their title defence, and with the impending return of Steve Smith and David Warner, things are far from settled within the group. The ability to spin the ball both ways means that Zampa should get first crack, but logic and the Australian selectors don’t always go hand-in-hand.

It took seven years before Cricket Australia settled on a Test spinner and backed him to the hill. He now has 339, with only Warne, Glenn McGrath and Dennis Lillee ahead of him as the most successful Australian bowlers.

Who knows what Zampa is capable of with the same sort of support?

Australia’s hopes of going-to-back this winter are on life support. Without embracing spin bowling, they may as well cut the cord.