Take Sri Lanka for granted at your peril

As Australia lick their wounds after a hurtful examination from Virat Kohli’s all-conquering India, it’s time to refocus for the next assignment: a two-Test series against lower-ranked Sri Lanka.

While most are optimistic about Australia’s chances in regaining the Warne-Muralitharan trophy at home, it appears as though the Aussie arrogance of old has resurfaced – because, this time, they can be!

With almost no headlines on the travails of this Sri Lankan team in the build-up to the series, it’s assumed the visitors will cop a hammering. If this summer was a feature-length movie, Sri Lanka may as well be the credits at the end.

However, Australian fans deserve a detailed insight into this former powerhouse and, upon further analysis, this side may be more competitive than first thought.

Currently ranked sixth in world, Sri Lanka is just one spot beneath Australia in the ICC Test rankings. Like the Aussies, they too had their fair share of trouble, turmoil and heavy defeats – both on and off the field – in 2018.

Sri Lanka is in a prolonged rebuilding phase after the exits of heavyweights Mahela Jayawardene, Kumar Sangakkara and Rangana Herath. This mass exodus leaves gaping holes, which may take decades to fill.

There haven’t been any Will Pucovskis or Kurt Pattersons demanding to be selected. Like Sri Lanka’s dysfunctional government and chaotic parliament, the cricket team too is in an uncertain situation.

Footage emerged showing Chandimal applying saliva from a lolly in his mouth onto the ball in order to shine it, which resulted in a one-match ban from the ICC. Remarkably, Sri Lanka went on to win the game without Chandimal, in a low-scoring affair.

If we analyse Sri Lanka’s performances in 2018, they started off the year with a comfortable win against Bangladesh at home, before drawing that tightly fought series against the West Indies. They came home in July for a two-Test series against the second-ranked South Africa, winning comfortably.

Herath and Dilruwan Perera ran amok in that series, exposing the Proteas’ frailties against spin bowling, bagging 12 wickets at 17.25 and 16 wickets at 13 respectively. Opener Dimuth Karunaratne was the pick of the batsmen, averaging a Bradmanesque 118 for the series.

Roshen Silva and Dimuth Karunaratne were the pick of the home batsmen, averaging 47 and 42 respectively, while Perera once again shone with the ball, taking 22 wickets at a tick under 24 for the series. It was also Herath’s final hurrah, as the legendary left-armer bowed out after the first Test. 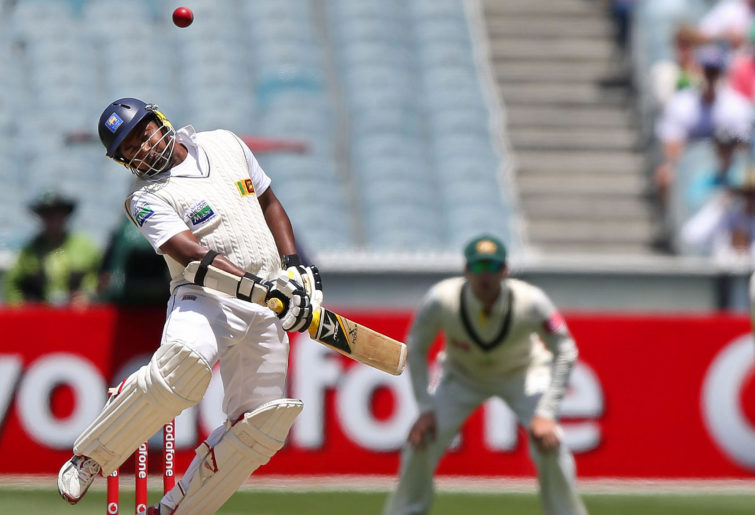 A two-Test assignment in New Zealand followed, in which Sri Lanka were obliterated. Apart from a spirited 274-run partnership between Kusal Mendis and Angelo Mathews to save the first Test of that series, the Lankans were found wanting in all departments.

As they arrive on Australian shores, this team will aim to regain their confidence and positivity, as a tough tour of South Africa looms.

Still, it’s not all bad news. Even without Angelo Mathews, the Lankans have talented batsmen who have proven themselves in away conditions.

Australia should keep a close eye on Dimuth Karunaratne, a stylish left-hander of the Marvan Atapattu variety, who has developed an appetite for big runs in recent months. Youngsters Kusal Mendis and Niroshan Dickwella are the other exciting prospects, as both performed well in New Zealand against a quality Kiwi pace attack.

Mendis and Karunaratne were also the openers in the ICC’s Test team for 2018, further highlighting their credentials.

Bowling is the obvious weak link after the departure of Herath. There will be a lot of expectation on Dilruwan Perera, the attacking offspinner who reaped 19 wickets at a lethal average of just 19.52 against South Africa and the Windies.

Lahiru Kumara, Kasun Rajitha, Suranga Lakmal and Dushmantha Chameera form the pace attack, which is not even half as penetrative as Australia’s but may cause a few surprises.

Having never won a Test match – let alone a series – in Australia, this is Sri Lanka’s best opportunity to break their hoodoo. Perhaps the biggest positive they have going into this series is not that Australia are also weak and rebuilding, but the nonchalant and dismissive attitude aimed at them.