Looking back: The 1987 Australian Formula One Grand Prix

I almost lost my mind with excitement the day my dad told me he was taking me to the Formula One Grand Prix in Adelaide.

I would have been eight years old at the time, so my memories are not what you’d call ‘full recall’, but the one thing that has always remained in my mind is that my dad broke the law to get my childhood hero’s autograph.

I had been watching Formula One for a few years by this point, but as a kid does. At first I liked the cars. Then I got to like a driver (Alain Prost). Then I started piecing together that each race meant something in a bigger picture.

The year before, Adelaide had hosted one of the most exciting season finales in history. The vision of Nigel Mansell’s tyre exploding down Brabham Straight was now part of the Wide World of Sports outro and was burnt into my memory. This was the period in which I went from being a kid who just liked the pretty colours to something more formed and hardcore.

The Australian Grand Prix has never been better than it was back in Adelaide. Melburnian to the core, it pains me to say this, but the grand prix in Melbourne is just good. In Adelaide it was extraordinary. As a kid the first thing that struck me about Adelaide was how the city supported the event. When the grand prix came to town, it felt like a city-wide party.

My dad had picked Stag turn for our grandstand seats. Stag was a 90-degree right-hand turn which followed a very quick left-right combo. It was a tricky test for the drivers coming out of the right-hander to hit the brakes, shift down a gear or two and then send the car right again. It was a very entertaining part of the track and a great place to judge the different levels of driving skill. Through Friday and Saturday we witnessed maybe nine or ten spins.

The first session of F1 was just mind-blowing. I remember being so pumped seeing one car after another, but all the time in my head I was thinkingm, “Where’s Prost?”. When he finally came around the bend in that distinct red-and-white McLaren I jumped out of my seat, pointed and yelled. People around me smiled and giggled, including my dad.

Getting into old man, things-were-better-back-in-my-day mode, one of the things missing from today’s Formula One is Friday qualifying. It was just plain awesome to see the cars in qualifying spec for two days. And qualifying spec in those days was qualifying engines, tyres and unlimited laps – talk about heaven. 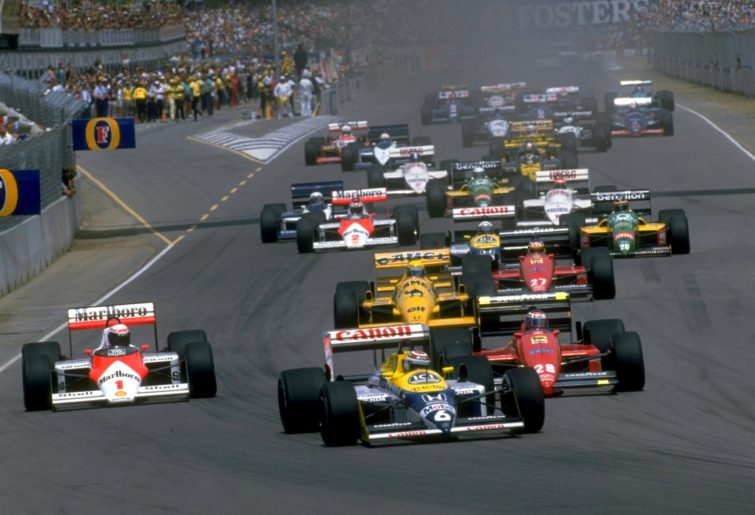 After two days of qualifying Prost managed to get on the front row, second behind Gerhard Berger. That night before the race I slept like an infant, waking up every couple hours.

From the start Berger was in a league of his own and brained the field. I don’t remember much else about the race other than the ultimate childhood memory. About an hour into the race Prost was coming through and, bang, the car snapped sideways and he spun into the tyre wall right in front of us. I remember being so disappointed but so ecstatic at the same time. My hero had crashed at my corner – at my corner!

As soon as it happened all I could think of was trying to meet him. For some reason Prost had stuck around until the end to look over his car. As soon as my dad saw him, he did the most athletic thing a 30-a-day smoker on the wrong side of 100 kilograms has ever done – he leapt off the front of stand into the marshal’s area, and before they had a chance to stop him, he ran up to Prost and asked him to sign my hat. He did, and I still have it to this day.

Part of me writing this is to try and to put into words how life-altering and meaningful that moment was for me. I still can’t do so with any real success; it’s just beyond words. Berger ended up winning, but I wasn’t really caring at that point – I had my signed Prost hat!

The 1987 Australian Grand Prix was not and is not a classic race in the slightest. It was even probably one of the more boring additions to the Adelaide canon. But for me, it was the best. Until 1988.

Lewis Hamilton led home a Mercedes 1-2 at Sunday’s Grand Prix of Steiermark to complete a dominant weekend for Mercedes. Contrast this to Ferrari, whose weekend went from bad to worse. On the first lap, the two Ferraris made contact with the resulting damage forcing both Sebastian Vettel and Charles Leclerc to retire. The field […]