After a hectic week of A-League football with nine matches across six days, the new school term coincides with a return to regular weekend fixtures.

Perth Glory, Sydney FC and Wellington Phoenix all missed chances to snatch two wins from the chaos of last week. The Victory triumphed in their sole appearance and Adelaide rustled up four points in what was another promising step for Marco Kurz’s men.

The Roar of the Crowd has taken a mid-year lead in the tipping and the writer missed a golden chance to sweep to the front after hitching his wagon with the Jets one too many times and backing the Wanderers who then squandered a 2-0 lead against Brisbane.

Round 17 throws up some meaningful fixtures in terms of semi-final play. Particularly Perth and Wellington in the west on Saturday night and Sydney FC’s match-up with Melbourne City at Jubilee Stadium on Sunday afternoon.

Be sure to enter your tips into the sheet below and have a say in the brilliantly performing voice of the crowd for 2109.

Here are the thoughts of the panel as the A-League fast approaches its final ten weeks of home and away action.

The real question is whether Vedran Janjetovic will start for the Wanderers, but even if he doesn’t, they should be chastened enough to down a spirited but struggling Jets. In all honesty though, there’s not a whole lot for either side to play for here.

The Mariners have been much-improved in recent weeks, but that won’t be enough to stop Victory as they look to close the gap on Perth Glory at the top of the table. Expect Kevin Muscat’s side to chalk up another win in Gosford.

Brisbane Roar’s battling qualities were on full display last weekend, and although it’s been a season to forget for the Queenslanders, they’re a much better side than their points tally suggests. The opposite is arguably true for Adelaide, so this one may well finish deadlocked.

‘The Distance Derby’ will always be one of the funniest things about the A-League, but this clash is undoubtedly the match of the round. Glory should just about nick it in front of their home fans, even if the Phoenix have proved tough to beat this season.

Sydney FC’s final home game at Jubilee Stadium should end in a regulation three points for the Sky Blues against a Melbourne City side who often look like they don’t even want to be there.

Friday night could well be won by the side most able to remain calm and poised; so desperate both will be for a bag of points.

The Jets have a numerical hope of playing finals, as unlikely as it may be and the Wanderers will be attempting to convince themselves of the same.

In reality, this match could wind up meaning nothing at all if the top six maintain their consistent form. I’m not really sure why but I’ll tip the Wanderers to find a goal or two from a youngster and the Jets to be sent home in a fog of disappointment.

Central Coast will lead early against the Victory before the visitors will put three or four in the net and inflict the 13th loss of the season on the Mariners. 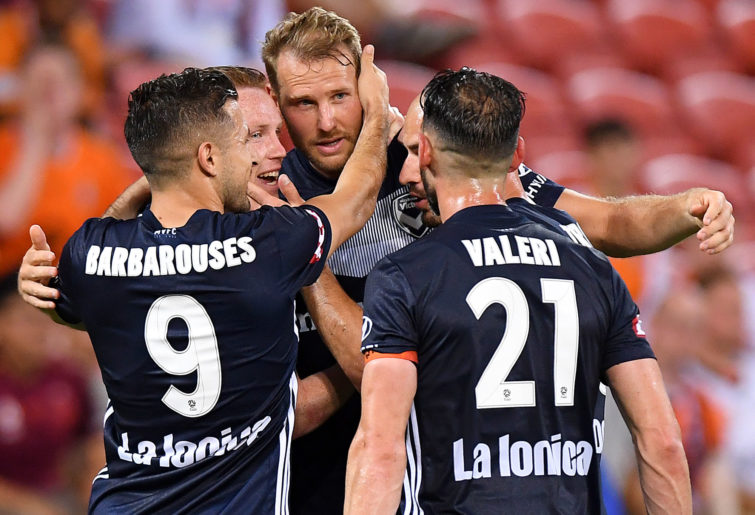 Adelaide look to be building nicely and George Blackwood has made something of a difference in the minutes he has played since returning from injury.

As a much needed focal point up front, Blackwood has allowed other members of the Reds’ forward line to play more naturally when he has taken to the pitch and the striker dilemma does appear to be partly on the way to being repaired. Brisbane are a rabble right now and the Reds will win comfortably.

Perth will beat Wellington at HBF Park and ‘the shed’ will have another night of table-topping ecstasy. Wellington have a chance in this one yet the home advantage may be the deciding factor.

As Diego Castro’s fitness and play improves week by week, the full attacking potential of the Glory comes to life. With Chris Ikonomidis back very soon, it is an ominous looking front half.

Sydney FC should deal with the threat Melbourne City pose at Jubilee Stadium on Sunday. Sydney will score, the same is difficult to say of the visitors. With Wellington breathing down their necks, Warren Joyce’s men need a response after an unconvincing performance in New Zealand.

This is as good a chance as any; up against one of the form teams in the competition.

The Wanderers have certainly been entertaining lately. Last week’s 2-2 draw with Brisbane was rollicking fun with some goalkeeping high-jinx thrown in for good measure. If they keep up their positive mindset they should beat Newcastle, who with just 15 goals are the competition’s lowest scorers.

Central Coast toiled hard against Adelaide and it’s good to see they haven’t dropped their bundle. Matt Simon has impressed with his maturity this season. Melbourne Victory won’t take the Mariners lightly and the three points will be crucial to keep in touch with Perth.

Ola Toivonen is proving to be the buy of the season with his great positional hold up play and amazing ability with the dead ball. Victory will be too desperate.

Adelaide haven’t been particularly convincing recently yet they are proving a hard nut to crack, having lost only one of their past five games. I expect them to get the job done against Brisbane who are struggling to get their combinations right.

The loss of Andrew Durante to suspension will leave a huge hole in Wellington’s defensive plans against Perth. It should be an exciting contest and the Glory’s Andy Keogh, Diego Castro and Neil Kilkenny will test Phoenix goalkeeper Filip Kurto, who has shown to be every bit as capable of saving real shots on goal as imaginary ones. Perth to win due to the Durante factor.

Sydney FC were far from their best against a strong Victory outfit last week but after a shaky start to their tenure at Kogarah are now feeling right at home. They should be too good for a sluggish Melbourne City.