Latrell Mitchell has chosen to represent the Indigenous All Stars over taking part in the Sydney Roosters’ world club championship tilt.

The superstar centre headlines the Indigenous side which will take on the Maori All Stars in Melbourne on February 15.

The game is played two days before the Roosters take on Wigan in the World Club Challenge in England and Mitchell has been giving the club’s blessing to represent his culture.

Fans will also get their first look at Kalyn Ponga in the No.6 jersey when he lines up for the Maoris side.

The Newcastle star is this year attempting a Darren Lockyer-like move from fullback to five-eighth in his second season at the Knights.

Ben Barba will play his first match on Australian soil in three years when he lines up at fullback for the Laurie Daley-coached indigenous team.

After winning the 2016 NRL grand final with Cronulla, he was forced over to French rugby union and the English Super League after recording his second illicit drugs strike.

The former Dally M winner has signed with North Queensland and is seeking to write a fitting ending to his storied career.

He will form a formidable Indigenous backline alongside Mitchell, Blake Ferguson, James Roberts and Josh Addo-Carr. 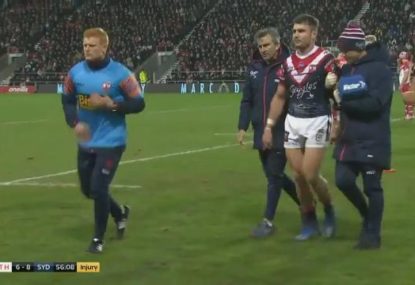 Yesterday, TIGER penned an article that described an interesting passage of play involving Latrell Mitchell as an attacker being tackled by James Tedesco.