The past 18 months have been challenging for a thinking fan, with the repeated administrative malfeasance of AFL HQ. This year, we cast all of that aside, and go back to what makes Australian rules football the best sport in the world.

Forgive the self-indulgence for a moment, but it is worth pointing this is just my second footy column since October 18, or a bit over three and a half months. That is far and away the longest stretch I’ve had not writing – or thinking – about the AFL since I started doing this in 2015.

To be honest, I had thought about ending the column. But then, I remembered the main reason I started doing this: footy is ridiculously fun. And I was, in retrospect, really close to unwittingly letting the negativity that enveloped the league last year kill off my intrigue in all things AFL.

So, my promise to you – and myself – is we won’t get bogged down in the negativity of most other segments of the league’s media and the doubtless incompetence and poor decision-making of the administration. Not in 2019. This will be the year of relishing in all that is good and great about the AFL.

You’ll see a slightly different column from me in 2019. Perhaps what has come before on The Roar blended with the looser and more celebratory tone of the it-might-be-back-just-in-a-different-form-Onballers. It’s the year of positivity.

And we begin the year of positivity with a prediction I am absolutely positively 100 per cent on board with: the Melbourne Demons are going to win the 2019 premiership.

They mightn’t be the market fancy – that’s Collingwood or Richmond depending on where you look – but, equally, they aren’t a team that figures to come from nowhere in the preseason, like the Western Bulldogs, Richmond and West Coast before them.

Did you know the past three premiers were all 20 to 1 or longer before the first ball was bounced in their respective seasons? Crazy.

No team with those sorts of preseason odds profiles as a bolter this season. The Dogs were young and were thought to be a year or two away after stunning everyone with their rise to finals in 2015. The signs were all there for Richmond, most people (not me!) were blinded by the Ninthmond meme. West Coast were written off because of list changes that signalled a rebuild; we (and this one does include me!) should’ve looked at it more objectively.

This year, no. Do you trust a re-tooled St Kilda? Can North Melbourne not just defy conventional wisdom but statistical outperformance and the injection of youth and reach the 12-win mark once again? Was Port Adelaide’s black hole finish to 2018 merely a source of gravitational propulsion that will propel them to the premiership? I don’t see it. At least not yet.

The competition around the middle of the ladder is going to be insane once again. Everyone is sleeping on Greater Western Sydney, again, and we’ll get to why and why it’s wrong soon enough. Sydney, Hawthorn and Geelong are going to miss the top eight apparently, because reasons, and those reasons aren’t too sound if you ask me. Particularly for Sydney. Are you ready for the Isaac Heeney Brownlow Medal Campaign?

Essendon might be primed to rise; they’re certainly primed for prime time, so HQ will be praying it is so. We should feel reasonably confident in Adelaide’s prospects, if only because their 2018 was ridiculous, and their list profiles as a contender. Maybe they’re the ‘from the clouds’ team we’re looking for, albeit one there seems to be a decent bit of buzz about.

Hoping to join them will be the likes of the Dogs, Dockers and Lions, who finished in the bottom six but have reasons to be bullish. The Dogs have stockpiled a funky but extremely talented list of young players and have a certified mad man as their head coach. The Dockers finally fixed their forward line, and have an injury-free prime-age Nat Fyfe, which no one else has ever had before. I’m glad I got out in front of the Brisbane Lions hype in August last year, because over the summer they have emerged as the People’s Choice for a top-eight surprise. Maybe. We’ll see.

The league’s two sure-fire rebuilders – and the class is relatively small compared to history – figure to be battling for the one seed from game one. Carlton and Gold Coast will be interesting for many reasons, but they have one thing in common: there are plenty of spots available in the best 22, and some intriguing players who could fill them.

Carlton will also be playing to avoid the spectre of becoming the first team in almost 20 years to have traded the number one pick, even if they didn’t necessarily mean to do it at the time.

As a delightful aside, can you imagine if Adelaide win the premiership and have pick one in the draft? It could set off a trade-period frenzy unlike any before. It is at the very least in play; even if they finish in the top four, that pick has way more value to other clubs, and the Crows could (or should) split it into a handful of assets.

The Blues’ year will be fascinating perhaps for what happens off the field. We’re going to hit the four-year anniversary of my Carlton Trade Value Bible column, and my infamous call (among the Carlton Big Footy board at least) that the Blues’ 2015 trade period was a disaster. One assumes there will need to be clear communication of the side’s progress on the field which may be less visible to the casual fan, otherwise the pressure will surely (and maybe unjustifiably, we’ll see) rise. 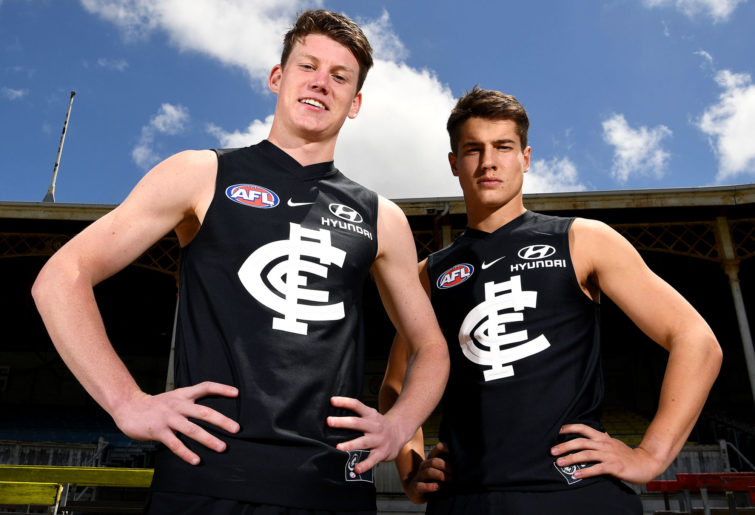 Gold Coast has a free hit in 2019, though not in a good way. Expectations aren’t just low for the Suns. They are so low they don’t exist.

The expansion team spectacularly hit the reset button last off season, and now just David Swallow, Tom Nicholls, Sam Day and Rory Thompson of the team’s original list remains. A tough season is in prospect, and by the end of the year I forecast we’re talking about whether the Suns will join the exclusive club of teams with ironic team names (currently populated by the likes of the LA Lakers, Utah Jazz, and LA Dodgers).

Through it all, I keep coming back to Melbourne. Everything – every thing – suggests this is a team that will contend for a premiership.

They broke all sorts of hoodoo-ey droughts last year: make finals, win a final, a preliminary final appearance. If that means anything – note: not clear it does – then the Dees are golden on that front.

The team is stacked. Have you seen them? The midfield is ridiculous: Jack Viney, Clayton Oliver, Angus Brayshaw, Christian Petracca (this is the year guys), James Harmes, Nathan Jones. And the wings like Christian Salem, Alex Neal-Bullen, Billy Stretch, Bayley Fritsch, and newcomer Kade Kolodjashnij. And among them the younger guys coming through – watch for Charlie Spargo this season.

The backline might be the best in the league, the only qualm being we’re yet to see it in action. Jake Lever missed most of the year with an ACL injury, and the Dees traded for Steven May. Suddenly Sam Frost and his awkward Nathan Wilson impersonation is a distant memory. Between Lever, May and Oscar McDonald, tall forwards are not going to have a good time against Melbourne this year.

Forward of the ball, it’s all about flexibility and the presence of a variety of options. Jesse Hogan isn’t around anymore, but all that means is Tom McDonald can fulfil his destiny and win the Coleman medal. Jake Melksham emerged as the heir to Neville Jetta’s Most Underrated Player throne.

The Dees ended the 2018 home-and-away season as the second-best team on my Pythagorean wins table, and had the clear number one attack in the game (being the only team to score more than 100 points per game on average). They ran headlong into a buzzsaw in the penultimate round of the year; an interstate preliminary final against the eventual premier. No shame there. 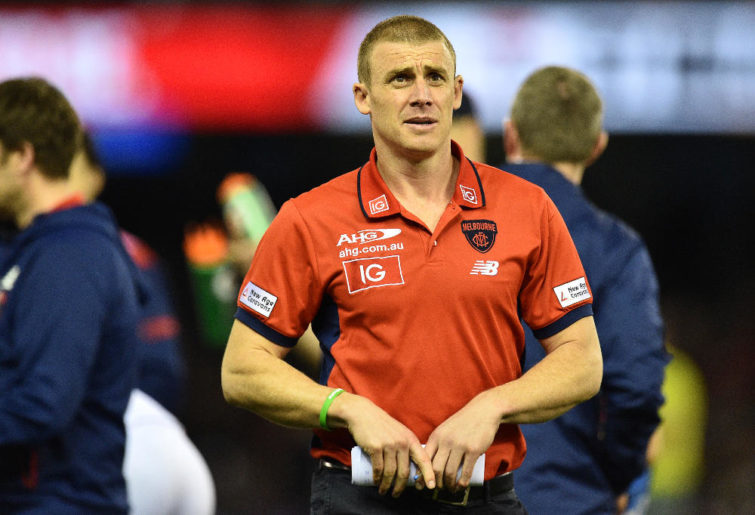 Coach Simon Goodwin and his crew will need to adjust the way they play centre bounces. The league’s first regular exponent of the off-the-square scramble, Melbourne’s tactic has been outlawed. No matter: did you read the bit about their midfield and defence above? If anything, forcing the Dees to be more vanilla with their initial set ups might be an advantage, because their opponents’ ability to disrupt Max Gawn (holy shit I forgot Max Gawn) and his onballers from the middle.

We’ll get to the broader implications of the AFL’s rule changes soon enough.

Like I said, I keep coming back to the Dees. What’s more, they appear to have pristine health with limited niggling – let alone season-interrupting – injuries to speak of seven weeks out from the season. Plenty of guys are coming back from post-season surgery, but that’s normal in 2019. Melbourne is going to be really, really good. Convince me otherwise.

Where my newfound outlook may be challenged this year is in relation to coaching, or more specifically coaches. We have seen an unprecedented amount of coaching certainty in recent years, and indeed there wasn’t a single coach change at the end of the 2018 season (the first time that’s happened in at least a decade).

There are reasons for this (which we’ve covered previously) but the most significant was the advent of the football department spending cap and tax system, whereby any coach payouts attract a 75 cents on the dollar tax if it pushes a club above the cap threshold.

It means a $1 million payout becomes a $1.75 million payout, and in spite of all of the broadcast riches, most clubs aren’t for paying big luxury tax bills – particularly because the cash gets distributed to their opposition clubs.

That effect will cool this year, if only because almost half of the league has a coach with a contract that reportedly ends at the end of next season. This includes Brendon Bolton (apparently, though he’s on an ’employment contract’ instead of what I’d guess amounts to a contractor-style relationship), John Worsfold, Ross Lyon, Leon Cameron, Brad Scott, Alan Richardson, John Longmire and Luke Beveridge.

I may be wrong, but I have a feeling many coach contracts have clauses in place which limit the payout of coaches if they are moved with a year to go on their deal; thus, the luxury tax implications are far more digestible.

One move could trigger a significant re-shuffle across the league. If Carlton stupidly decides for ‘reasons’ Bolton is the problem with the Blues, every building team will have a look. Lyon is in his eighth year as Fremantle coach, and should the Dockers miss the eight, it will mean half of his tenure has been outside of finals. St Kilda has completely renovated its off-field crew, and installed Brett Ratten as an assistant to a previously under-fire Richardson.

Coaching and coaches are going to emerge as significant talking points as the year goes on, and it’ll certainly test my want for more positive dialogue.

But hey, if you remove the personal element to those sorts of discussions talking about change and the theory of what’s possible is still pretty fun. That’s my promise to you in 2019: more fun, less sludge, and a celebration of what is far and away the best game in the world.