VOTE: Pick your Australian XI for the Ashes

The Roar
5th February, 2019
127
Join the conversation
2754 Reads
Advertisement
Write for The Roar

While the 2019 Ashes series may be some time away, Australia have already played their last red-ball cricket before the all-important Test series gets underway in August.

With one of the most tumultuous periods in this country’s cricketing history finally ending, the makeup of the Test side that will travel to England has made for particularly interesting speculation.

The big question is whether suspended trio Steve Smith, David Warner and Cameron Bancroft – well, mainly Smith and Warner, really – just walk back into the side. Will they have enough form under their belts? Will the public actually want them back? 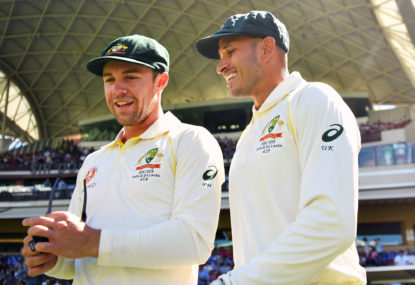 After demolishing Sri Lanka at home, here's how Australia's Ashes squad is shaping up

Then there’s the rest of the batting order. Did Marcus Harris throw away his plane ticket with a poor showing against Sri Lanka? Will Joe Burns keep his place in the side? Is Usman Khawaja under threat from Kurtis Patterson, Will Pucovski or – dare we say it – one of the Marsh brothers?

While Australia’s bowling lineup appears at first glance to be more settled, it’s easy to forget Josh Hazlewood did miss the Sri Lanka series with injury. Assuming the selectors go with three pacemen and a spinner, only two of he, Mitchell Starc and Jhye Richardson can take the field at once, with Pat Cummins pretty much a lock – who do you think is our best bet?

It will be some time before we get answers to these questions, so we’re throwing it over to you now.

Pick two openers, four middle-order batsmen, one wicketkeeper and a bowling quartet in the form below, and we’ll publish the team the crowd has selected next week in a piece on The Roar.