You should be watching squash instead of tennis

If you are one of the more than 1.5 million TV viewers who spent time watching the Australian Open, then you enjoy the thrill of an individual racquet sport featuring great competitors.

What you may not realise is that there’s another sport you should be watching that is best described as ‘tennis on steroids’.

It features much faster and intense action, greater athleticism and endurance, and far less downtime between points.

I’m talking about squash, a sport with a proud history in Australia and that is now, thanks to the internet, readily accessible in high-definition video, streamed onto the giant screen most families now have in their living rooms.

So, what makes squash a better game to watch at home?

1. Hand-to-hand combat
Squash is the only global racquet sport without a net. Both players compete side by side, jostling for position inside a glass box.

2. More action
There’s no toweling off between points, much less a 30-second service clock. When the ball is put into play, the action lasts much longer than a typical tennis point.

At the Australian Open, the average point was between three and four shots. The men’s final of the Tournament of Champions in New York City last week featured a single point that lasted nearly two and a half minutes. That point had more strokes – 93 – than many sets.

3. Shorter match times
Both men’s and women’s matches are best of five games, played to 11 points. A typical game can last up to 20 minutes, so a match is anywhere up to 80 minutes.

Moreover, the ball is in play upwards of 80 per cent of the time, whereas in a tennis match it’s about 16 per cent.

4. Supreme athleticism, fitness and endurance
Players often wear heart-rate monitors, and it’s typical to see their hearts beating at 180 to 195 beats per minute, from the start of the first game right through the end of the match. You won’t see anyone on the professional tour who isn’t in incredible shape.

5. The serve offers no significant advantage
Big tennis players can blast their way through tournaments. Not on the squash court, where the serve is of negligible benefit.

6. Fantastic nicknames
‘The French General’, ‘The Artist’, ‘The Beast of Alexandria’, ‘The Hammer of Thor’, ‘The German Tree Chopper’, ‘Superman’, ‘The Marksman’, ‘The Viper’.

You get the idea.

7. Players dive
The modern game, which has been revolutionised by a new generation of players, features full-extension dives in the middle of points. Players are able to recover, continue playing, and sometimes even dive a second time in the same point.

A ‘between the legs’ shot in tennis doesn’t compare (squash has all those trick shots, as well).

8. Squash televises incredibly well
The Professional Squash Association provides live and recorded webcasts of every match from all the big tournaments.

High-definition cameras are mounted around the court, with commentary provided by professional announcers and retired champions. For a modest subscription, every match is available for streaming at any time – and there’s a huge amount available for free if you want to have a taste.

Until the last decade, Australia was a squash powerhouse. Some of the greatest players of the game hail from Down Under, from the untouchable Heather McKay, who had a 20-year undefeated streak, and Geoff Hunt, who was world No.1 for five years in the late 1970s. More recent champions include Michelle Martin, Sarah Fitz-Gerald, and David Palmer.

And while we still have many fine players, as witnessed by our success at the recent Commonwealth Games on the Gold Coast, where Australia won several medals in doubles, Channel Seven didn’t see fit to broadcast a single point.

Before long, squash is going to be an Olympic sport (it’s a bizarre tragedy that it has been overlooked for so long) and it will continue to gain a global audience.

If you want to find out what you’ve been missing, it’s time to log in and stream one of the most exciting sports you’ve likely never watched.

Min Woo Lee teamed up with three other golfers to smash the previous world record! 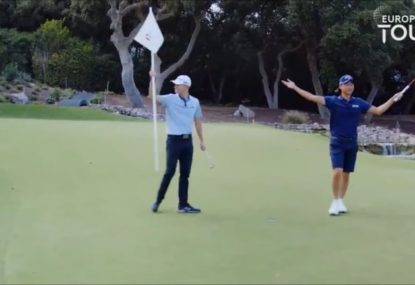