FFA hits back at Stajcic's claims

Former Matildas coach Alen Stajcic says his career is in tatters and his reputation is ruined after his removal from the job five months out from the World Cup.

Alen Stajcic has called for an independent inquiry into his controversial dismissal as Matildas coach in a bid to restore his reputation, which he says is in tatters.

After issuing a 1673-word statement early on Monday, an emotional Stajcic held a 40-minute media conference in Sydney.

He was almost in tears when talking about the pain the saga had inflicted on his family since his axing three weeks ago over alleged workplace and culture issues.

“By coming here today and presenting my facts and chain of events that have led to my termination, I’m hoping it will (restore my reputation),” Stajcic said.

“The events of the last few weeks have devastated both me and my family. My career is in tatters and my reputation has been ruined.”

The incendiary rebuttal came ahead of a FFA board meeting on Monday night, when all facets of the Stajcic saga would come under light.

Later on Monday, FFA chairman Chris Nikou yielded no ground to Stajcic in a statement, in which he “disagreed with many of his assertions”.

An unfortunate arbitration battle looks likely, with Stajcic confirming he has taken legal advice on potential defamation and for breach of contract.

Asked whether he would seek re-employment, Stajcic said: “I’m here today to clear my name and restore my reputation. It’s not a question for today.”

He later admitted to considering if he would remain in coaching in Australia or abroad, and that he received offers last year to take charge of another country.

Stajcic chose not to single out any individuals at FFA, but was firm on his desire for transparency, saying there had been a “lack of due process” and his axing was an “injustice”.

“During my time as Matildas head coach (I) never witnessed, never participated in, and never acquiesced to the participation of others in any impropriety or misconduct relating to players or the Matildas’ set-up,” he said.

Stajcic had his employment terminated on January 19 by the FFA board due to the alleged development of a toxic culture under his leadership.

The board formed that view after Matildas players and staff completed anonymous surveys which reportedly suggested an unhealthy environment.

Stajcic questioned why the FFA did not attribute direct blame to him over its concerns but still showed him the door.

“Up until the day before the FFA terminated my employment, I have only ever received praise from (FFA CEO David) Gallop both publicly and privately,” he said.

“The very first time I met with Mr Gallop about these alleged poor culture issues were on 18 January 2019, at 9:30am.

“Our discussion about the supposed poor culture within the Matildas lasted approximately 20 minutes. Thereafter my employment was terminated the next morning.”

Nikou repudiated that claim, saying Stajcic, in that meeting, admitted to a ‘dysfunctional’ team environment that was ‘always going to be this way’.

“In those circumstances, we decided to act in time to put the team’s FIFA Women’s World Cup campaign back on track,” he said.

“We have been 100 per cent focused on the immediate and long-term well-being of our team and staff. Our decision to act was driven out of care and concern for our players and people. It was, and remains, our sole motivation.”

Stajcic said he saw the original PFA-FFA survey as “materially and hopelessly flawed”.

“For now, I look forward to the search for truth, honour and integrity in this awful saga,” he said.

“I concur with others who are demanding a full and independent investigation.”

A record TV audience of over 2.3 million Australians tuned in on Channel Seven on Monday night to watch Australia play Sweden in the semi-finals at the Olympic Games. There were many more watching the game online via 7Plus. 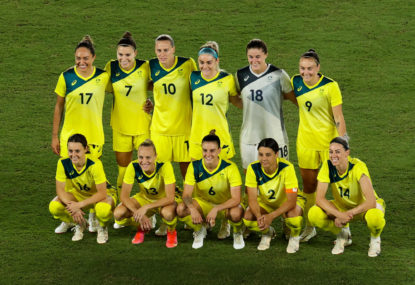