Rewind to 1990: When England defied the odds at Sabina Park

England came into the 1989-90 Caribbean tour on a streak of 29 winless Tests against the West Indies. Their last win against the islanders had come in 1973-74; since then, they had lost 20 and drawn nine Tests.

A one-wicket defeat to Windward Islands in the lead-up to the five-Test rubber did not help England’s cause, and the West Indian supporters were certainly licking their lips in anticipation of yet another hiding when the teams assembled at Kingston’s iconic Sabina Park for the opening Test on 24 February 1990. Led by the legendary Vivian Richards, the West Indies won the toss and decided to bat first.

England, under the captaincy of Graham Gooch, fielded two promising debutants in Alec Stewart and Nasser Hussain and opted to have an all-pace bowling attack to counter the West Indies, who, despite the absence of an unfit Curtly Ambrose, possessed the fiery quartet of Malcolm Marshall, Patrick Patterson, Courtney Walsh and Ian Bishop. Needless to say, the odds were heavily stacked against the visitors.

Openers Gordon Greenidge and Desmond Haynes assuredly put on 62 before the former was run out while going for a second run. This was the breakthrough England needed, as the innings soon unravelled due to a mix of sharp bowling and shoddy batting. David Capel got rid of Richie Richardson and Carlisle Best, while Gladstone Small caught Haynes off his own bowling to reduce the score to 4-92.

Richards attempted to rebuild the innings along with Carl Hooper, but his leg-before dismissal to Devon Malcolm put England in the ascendancy again. Angus Fraser (5-28) took over the responsibility of dismantling the lower half, as he snared the last five wickets for only six runs to send England crashing from 5-144 to 164 all out. The entire innings lasted just 64 overs, with Haynes’s 36 being the top score.

England lost Gooch and Stewart with 60 on the board before Wayne Larkins and Allan Lamb took the score to 2-80 at stumps on the first day. The overnight pair had grown their stand to 56 when Larkins, having made a solid 46, became the first of Walsh’s five victims. If the Jamaican faithful were hoping for a routine English collapse, they were about to feel dejected, as Lamb went on to play a fine knock.

Lamb combined with Robin Smith for a fourth-wicket alliance of 172, in the course of which he reached his tenth Test century. The South African-born duo displayed great resolve in blunting the West Indian attack, and their gradual dominance was a refreshing change from England’s many meek Wisden Trophy surrenders over the past 16 years. The stand was broken when Smith fell to Bishop for a patient 57.

Lamb was sixth out at 315 for a highly impactful 132 from 205 balls, which consumed a little over six hours and featured 17 fours. His effort steered England to a sturdy 8-342 by the end of the day. The lead crept to 200 early on the third day, as England were bowled out for 364, with Walsh returning figures of 5-68. The West Indies now faced an uphill task if they were to maintain their unbeaten sequence. 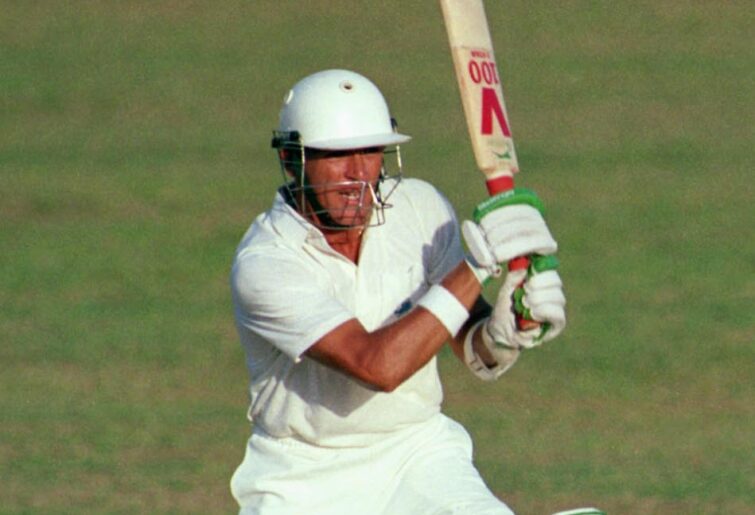 Alec Stewart of England in 1990. (Photo by Getty Images)

England’s position thus far was almost surreal given that they had won only one of their last 25 Tests, against Sri Lanka at home in 1988. On the other hand, the West Indies had lost just one home Test throughout the 1980s, against Pakistan in 1987-88. Moreover, David Gower and Ian Botham had been left out from the squad, Larkins was 36 and recalled after nearly nine years, and the bowlers were rather raw.

However, for the second time in the match, England’s very own foursome rattled the West Indian line-up, thus showing that their collective inexperience mattered little. Small (4-58) and Malcolm (4-77), both Caribbean-born, were at the forefront, as the West Indies failed to claw back in the contest. Malcolm accounted for both the openers, while Fraser and Small removed Richardson and Hooper respectively.

Richards joined Best at 4-112, and for a while the West Indies looked like staging a turnaround as the fifth-wicket stand bloomed to 80. As was the case in the first innings, Malcolm collected the crucial scalp of Richards, this time the mode of dismissal being bowled. With the low bounce of the pitch steadily becoming a factor, England needed to ensure that their target was kept as low as possible.

Small had Best caught by Gooch for 64 to make the score 6-222 before the lower order obliged by hastening the proceedings. The West Indies ended the third day languishing at 8-229, ahead by only 29. Rain began to make an appearance on the rest day, which meant that the scheduled fourth day was completely washed out. Much to England’s relief, the skies were clear when play resumed on the final day.

The West Indies were duly dismissed for 240, leaving England with ample time to reach a target of 41, which was achieved in 16.3 overs for the loss of Gooch. Larkins hit the winning single off Bishop to put the finishing touch on a most astonishing nine-wicket victory that deserves to be among England’s best overseas performances of all time. Lamb was deservedly adjudged man of the match.

Seldom have we seen a team defy the odds in such convincing fashion to topple the world’s best Test team in their own backyard. England’s stunning triumph made a mockery of all pre-match predictions and underlined the glorious uncertainties of this great game. The bruised West Indians bounced back to win the series 2-1, but it was the Kingston coup that went down as the most indelible moment of the tour.