Alex Dombrandt was virtually unheard of four months ago. On October 12, 2018, the Harlequins back-rower had zero professional appearances to his name. Fast forward to mid-February and he has rapidly established himself as a rising star in English rugby.

If you blinked you might have missed it. A quartered-jersey cannonball has been exploding through defences in England and Europe, and it came out of nowhere. In just 12 starts – the only starts of his career – Dombrandt has scored an astounding nine tries.

Harlequins Director of Rugby, Paul Gustard, spotted rookie Dombrandt’s potential very early in the pre-season: “Within three days of training this kid was a standout in terms of skill level, feel of the game and so on. Within three weeks we were considering him for contention for the Match (squad of) 23 in the opening game against Sale.”

As is turned out, Dombrandt did not make that squad. Nor did he get to lace up his boots in any of the next four Quins matches due to a pre-season ankle injury.

His professional debut ended up coming against Agen (European Challenge Cup) as a replacement. A fortnight later he notched his first career start (and try) against Bath. The 21-year-old has not sat on the bench since.

The table below timelines Dombrandt’s rise from obscurity to Premiership powerhouse:

Dotting down tries at such a prolific rate is remarkable on several levels. Firstly, he is a forward. Typically, players in the backline get the larger share of the five-pointers, but Dombrandt’s nine place him alongside centre Joe Marchant as co-leader for Quins.

Note that Marchant has spent over six hours longer on the pitch than Dombrandt this campaign according to the team’s website.

“It’s a great record,” says Gustard. “Alex is one of these guys who has a knack of scoring, the ability to be in the right place the right time. He has a willingness and a want for the ball and he cuts good lines from out to in. He’s also a big guy at over 120km. Five metres out from the (try) line he’s a tough tackle.”

Indeed, Dombrandt has scored tries sledgehammering through defenders from close range, but he has been far from one dimensional. The rookie has also scored from support play after a line break, set pieces—including both scrums and lineouts, and even from an intercept and 40-metre dash to the line.

Then there is the timing off his tries. Twice he has scored in the 80th minute of games (against Leicester and Grenoble), while another one came in the first minute (against Wasps). Whether it is early in the contest or late, Dombrandt is proving a major handful.

It has not just been about finding the white line, either. A recurring theme for Harlequins has been Dombrandt’s pumping thighs and meaty torso bumping off defenders and giving his side front-foot ball to play with.

He has also shown sympathetic hands to provide some delicious offloads for his teammates. Twice Dombrandt has recorded try assists through promoting the final ball to hooker Max Crumpton after an attacking set-piece lineout.

The automatic riposte to praise for Dombrandt may be questions over the standard of his opposition so far. Sure, not all of Dombrandt’s opponents have been world-beaters. Benetton are not one of Europe’s sexier teams, and three of his starts have come in Premiership Cup games where clubs tend to water down the strength of their team.

However, this would not give the full picture. In more recent outings he has faced a step up in class and not taken one backwards step. In fact, he has gotten better.

Dombrandt was omnipresent in Harlequins’ scalping of the previously undefeated Exeter Chiefs on November 30. A few games later he was at it again at a packed Twickenham. In front of 80, 000-plus patrons at the home of rugby, the newcomer turned in a Man-of-the-Match performance against arch rivals Wasps. If you have any doubts about whether he can to rise to the big occasion, you shouldn’t.

Inevitably, the pundits have started to take notice too. Writing after the Exeter game, Sky Sports commentator and former England international Stuart Barnes heralded Dombrandt’s future representing the Red Rose with these comments in The Times:

“Against one of the top two sides in England, Dombrandt delivered a performance that was tailor-made for the way that England play. His dramatic carrying game is made for Jones and his team. Thinking of how England want to play, I’d say it would be insane to ignore him.”

Barnes was spruiking Dombrandt’s prospects of earning his ticket to Japan for the World Cup later this year. Cracking the England squad after their terrific start to the Six Nations seems a little bit further off now, but there is still plenty of time. 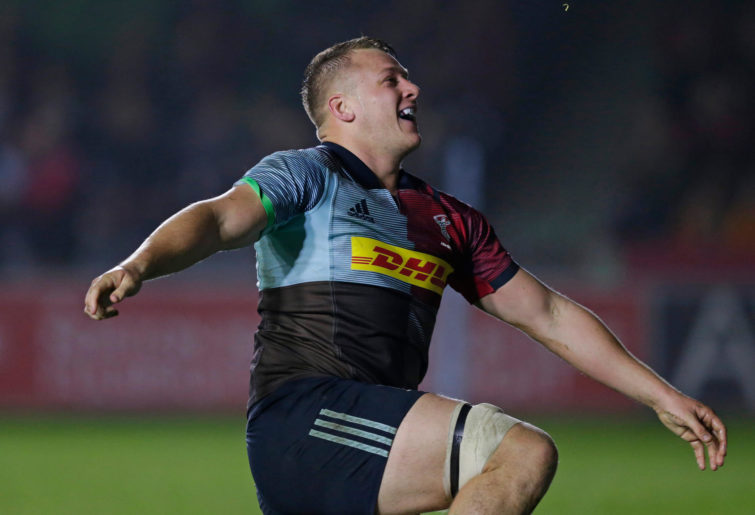 Alex Dombrandt has been a standout for Harlequins. (Photo by Henry Browne/Getty Images)

Gustard would not bite when quizzed on his firebrand’s chances of a call-up, but believes the only way is up: “What pleases me the most is his attitude to want to learn to want to get better. This is a kid who six months ago was still at university. I’m very happy with his progression (and) I still believe there is more to come from him.”

Time goes fast in sports sometimes. From anonymity to try-scoring phenomenon to England prospect in less than half a year has been an almighty leap forward. Alex Dombrandt is a name you are bound to see more and more.