An NRL jersey rant to get off my chest (again)

Less than a month til the season starts! Bought your team’s jersey for 2019 yet? Yeah? Nah.

It’s been more than 20 years since I sported season-accurate apparel to an NRL game.

For my birthday in 1996, I got a Knights replica jersey that I was proud to wear for the remaining month or so of the season.

It was a poor year for Newcastle, failing to make the eight, but I wasn’t too bothered – who would really be able to tell the difference when I wore the same get-up the following year?

Over the off-season – apparently on a Matty Johns recommendation to make the team look more like FC Barcelona (easy mistake to make, Peter Beattie) – the club jersey underwent a drastic re-design, from the strip they’d had from inception to the vertical stripes worn in victory over Manly on September 27 1997.

Come ’98, having undergone a bit of a growth spurt, it was time for some new clobber.

I wasn’t making the same mistake twice. This time, I picked out a non-playing jersey – red, white and blue stripes, with a Knights logo on the breast – that’s as relevant today as it was in the ’90s.

I’ve flirted with the possibility of buying a jersey in the intervening years, but they’re charging how much for some blue and red polyester?

It’s not just me, right? That is a ludicrous amount of money to pay for a top that will be relevant for one season.

And the attempt to make it sound like it’s worth that kind of coin is equally insane (I’ve used the Knights as an example, but all clubs have more or less the same spiel):

The jersey is constructed from 100% Polyester and integrates ISC’s AXIS fabrication to maintain comfort and body temperature. Also featured is the team and sponsor logos and fully sublimated team colours to further give you a sense of pride for the team. This is a replica of what your players will be wearing when they run onto the field making the Newcastle Knights 2019 Men’s Replica Home jersey that much more special.

But who the hell needs “a replica of what your players will be wearing when they run onto the field”?

These are 100-kilo-plus monsters who slam into each other with the force of a car crash – the jerseys they wear need to be tough enough to withstand these collisions, while keeping the players cool.

I’m sitting on a chair, eating some chips and drinking a beer. What part of my activities require clothing that can withstand 200-plus Gs of force? What’s more, games are played in the howling winter wind – a garment made of 100% polyester is not going to help me “maintain comfort and body temperature”.

But this is the only option if you want to wear the current season’s kit – a shirt that is built to all-but survive a tank running over it, complete with those ridiculous (on me) side panels to enhance aerodynamics and reduce the risk of an opponent grabbing you by the shirt-tail before you disappear through a gap and score the match-winning try.

Yeah, again: pies, ale, occasionally standing up and yelling. No NASA technology required. Just stitch some cheap material together and slap the sponsors’ stickers on.

The frustrating part is that it would surely be better for everyone if this was on offer.

A brief look on the Canterbury website shows unbranded jerseys from around $60. Let’s add $20 for the cost of branding and another $20 for a bit of cream.

That would mean being able to buy a 2019 season jersey for $100. It might not withstand the rigours of 80 minutes of NRL action, but it would probably get through a touch footy game, and could certainly manage a season of sitting in the stands.

And while there would be $60 less per transaction in the club’s coffers, I’m willing to bet the volume of sales lead to greater profits by season’s end.

As for my confidence regarding these increased sales? I’ve seen it in action.

I spent three years living in Liverpool, and come football season, I could have snapped the below photo every five minutes. 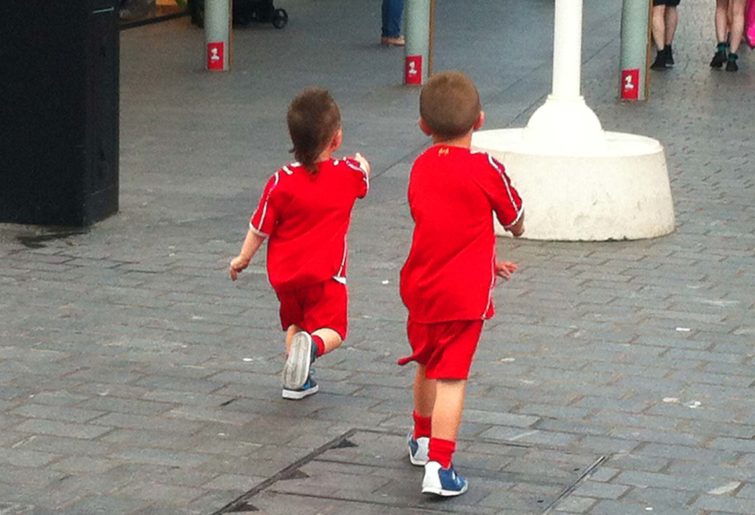 The kid on the left with the mohawk-mullet? Killin’ it. (Photo: Joe Frost)

Know how much an adult Liverpool jersey costs? With the current exchange rate, it’s around $100.

Granted our dollar and the British pound aren’t exactly like for like, and the Newcastle Knights don’t quite have the same following and profile as Liverpool FC, but the comparison has some merit.

Scouse parents are willing to buy their kids not just the shirt but the whole set-up because it’s affordable.

And, perhaps more importantly, kids actually want to get dressed like they’re about to run out onto Anfield because doing so long ago reached the tipping point; the odd kid out is the one who’s not head-to-toe in (sponsor-branded) red – or blue, for that matter, because you better believe Everton supporters do it too.

Whereas here in rugby league-mad Newcastle, I couldn’t tell you the last time I saw a kid wearing the present season’s jersey, let alone one cruising around town decked out in all the gear.

But you want to know the really annoying part? I’ve written this article before!

In 2012, having freshly arrived in the UK, I penned a piece bemoaning the NRL’s $160 jerseys compared to the price of replica shirts in England.

Granted, in the intervening seven years, the NRL haven’t increased prices, even though the consumer price index has gone up.

But while it’s not as expensive when adjusted for inflation, I maintain $160 is still a lot of money for a jersey that’s out of date by October (at the latest).

So instead of doing nothing, why doesn’t the NRL try doing something?

One season of cut-price jerseys, which are replicas in look but not performance to those worn by the stars of the game.

Worst-case scenario they end up on the ‘sale’ tab, along with the other crap that failed to sell, like hockey jerseys, aprons, and dog coats.