Most of the working world spends the week counting down the days to Friday.

We suffer through Mondayitis and Hump Day all for the promise of the creative acronym of TGIF, or Thank God it’s Friday.

Melbourne City don’t share the same enthusiasm for Friday nights as the rest of us. Since the 2015/16 season, they have played 36 games on Fridays, losing 18 of them. That two of those Friday night losses resulted in their elimination from the playoffs just adds to their woes all the more.

For a team that hopes to compete with their big brother across town, it’s a return that simply isn’t good enough.

The latest recurrence in Newcastle last night was a performance that is becoming routine for City – loads of possession, a vast array of lofted crosses, just one goal and rather boring on the eye.

Nearly 53 per cent of City’s passing this season goes sideways, and it might have been greater than this number in Newcastle. Too often Luke Brattan and Kearyn Baccus were caught square, with Shayon Harrison unable to find any threatening position between the lines to link with Jamie Maclaren.

Richie De Laet and Florin Berenguer weren’t willing to attack the space behind Newcastle’s fullbacks, leaving City’s midfielders to ponder aimlessly with the ball, pushing and prodding sideways and backwards. In contrast, the Melbourne Victory push the ball forward nearly 37 per cent of the time, resulting in over 20 more attacking passes per game than City.

A coach once told me that a good midfield unit needs three distinct players – a tackler, a thinker and a runner. They have the tackler in Baccus and the thinker in Brattan. Joyce needs Harrison or perhaps Riley McGree to be the runner, and threaten defences with forward forays in behind from midfield.

Maclaren needs to be more active and roll in to channels off the shoulders of centre-backs. It was too easy for Newcastle’s young side to keep City’s play in front of them on Friday night, closing down any space between the lines for the likes of Harrison and Brattan to take advantage of.

Vertical runs, even if unrewarded, should stretch a back four and allow the incisive passing that results in a higher quality of chance for Maclaren to finish. 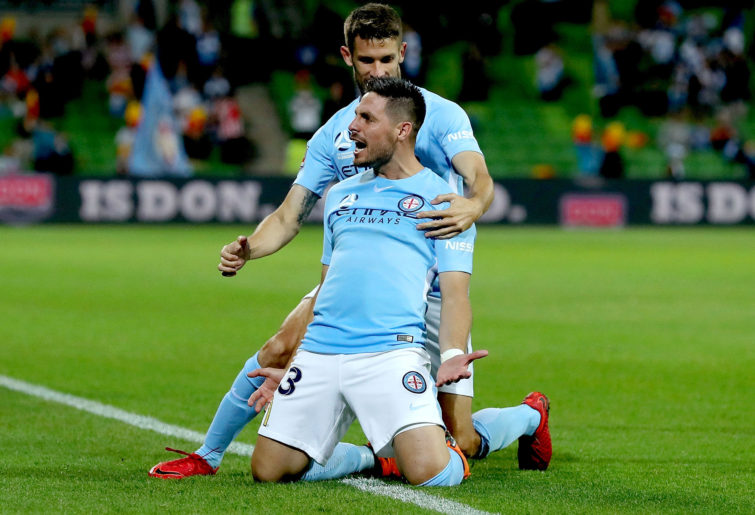 The other problem facing City is how to utilise their new striker. He’s prolific within the 18-yard box throughout his career, but rarely scores headed goals and struggles to create his own goals. His goal on Friday night was his usual modus operandi, ghosting in between centre-backs and capitalising on a deflected clearance.

His goal last week, teed up by a short cross along the turf, is his bread and butter. It begs the question why Warren Joyce and City persisted so much on Friday with speculative crosses high in to the penalty area. It simply doesn’t help Maclaren score goals, which is a problem for a team that converts on a dismal 12per cent of their shots.

Though struggling offensively, City are a good defensive team which tackles, scraps and competes in the back half of the field more than the other teams in fnals contention. Bart Schenkeveld, Curtis Good and Eugene Galekovic are an imposing rear guard that most teams would envy.

If Joyce and his players can summon the gumption and creativity to be far more positive in attack, they have a chance to really threaten teams this post-season.

They’re just hoping that the games don’t come on a Friday night.