What it looks like when the VAR works for football

I was at Coopers Stadium last weekend and was crushed to see my Adelaide Reds defeated by a very good Western Sydney Wanderers side.

Goals aside, one thing I got from the match was the very good use and management of the video assistant referee by match official Daniel Elder. Whether the A-League should use VAR has been heavily debated since its introduction. Its use has often been inconsistent, but I thought it would be appropriate to write and commend Elder on his use of it during this game.

For those who didn’t watch the match, Adelaide won a penalty after Jordy Thomassen was clipped by Wanderers captain Brendan Hamill, sending the Dutch striker down in the area. My first reaction as a Reds fan was that it was a penalty. I looked straight at Elder to see whether he was going to give it. He put the whistle to his mouth, showing that his first instinct was to give a penalty.

I was about to cheer, thinking it was certain that he was about to blow his whistle – until he played on and the Wanderers went on to their attacking end and had a half a chance to score. But then Elder used the VAR and awarded a penalty. This sort of thing has happened regularly this season, but I have to commend Elder on how he used the VAR later to check if it was a penalty so he was able to back his first instinct.

It was questionable as to whether it was a penalty or not. Obviously as an Adelaide fan I am going to say it is, but the commentators were not too sure about it after watching the replay. I believe that whether it was right or not, by looking at the possible alternatives of how that situation could have played out, I believe Elder did an excellent job in managing the situation.

Elder waved play on when the challenge was put in, allowing the Wanderers to play on and have a chance to score. In a bit of a sliding doors moment, had the VAR said that it wasn’t a penalty, it would have been play on and the Wanderers would’ve gotten that chance fair and square. Alternatively, had Elder have given the penalty in the first instance and the VAR decided it was the wrong call, it would have halted play for even longer and the Wanderers would never have had that small chance to score.

Elder used the VAR in the correct way, as it should be used – to check key and important decisions that were wrong during a game. Obviously he checked his decision and gave the penalty a few minutes later.

Whether or not you agree it was a penalty, in the end it worked out for both teams. Adelaide fans got their penalty and Craig Goodwin had it saved by under-pressure goalkeeper Vedran Janjetovic. Wanderers fans who didn’t believe it was a penalty will say Janjetovic’s save – a real confidence-builder for the keeper – was what Adelaide deserved.

While I was bitterly disappointed that United could not get over the line, I was impressed with how Elder used the VAR. His first thought was to award a penalty, and I saw by him put his whistle to his mouth, but he allowed the game to play on to later check if he had to change his decision.

It’s the way the VAR ought to be used, and it’s one of the best examples of the referee doing so in the A-League. 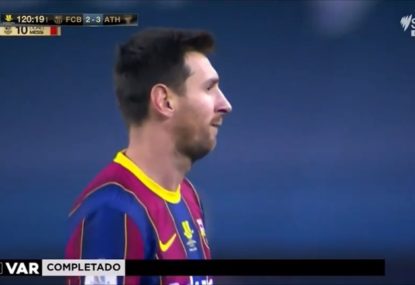