The NBL finals begin this Thursday night with four genuine championship contenders, but three of the four contending teams have coaches out of contract.

In addition, at least one of the already-eliminated clubs has parted ways with their coach – and there’s potentially more to come.

The NBL semi finals begin with Game 1 match ups this Thursday night with Melbourne United hosting the Sydney Kings and the Perth Wildcats taking on the Brisbane Bullets.

There’s no reason any of those four clubs can’t go on to win the championship over the next month in what is the tightest NBL season on record. But there’s also every chance that three of the competing clubs could have a new coach heading into the 2019-20 season.

We already know that Andrew Gaze won’t be coaching the Kings beyond this finals series with he and the club having made the announcement that his three years in charge will be coming to an end.

Then there is Perth’s Trevor Gleeson and Brisbane’s Andrej Lemanis, both attempting to before four-time championship winners as head coaches, who are out of contract at the end of this season.

There is still every chance they are re-signed by their clubs, but there is also no guarantees despite the outstanding resumes of both men.

Then of the teams already eliminated by the end of the regular season, it does appear Kevin Braswell and Mike Kelly are in no danger of losing their spots with the New Zealand Breakers and Cairns Taipans respectively.

But two more of the most respected and successful NBL coaches Rob Beveridge and Joey Wright’s futures remain unclear.

Beveridge and the Illawarra Hawks have already parted ways while there is no guarantee of Wright returning to see out the rest of his contract in Adelaide as he has openly admitted to be weighing up his options. 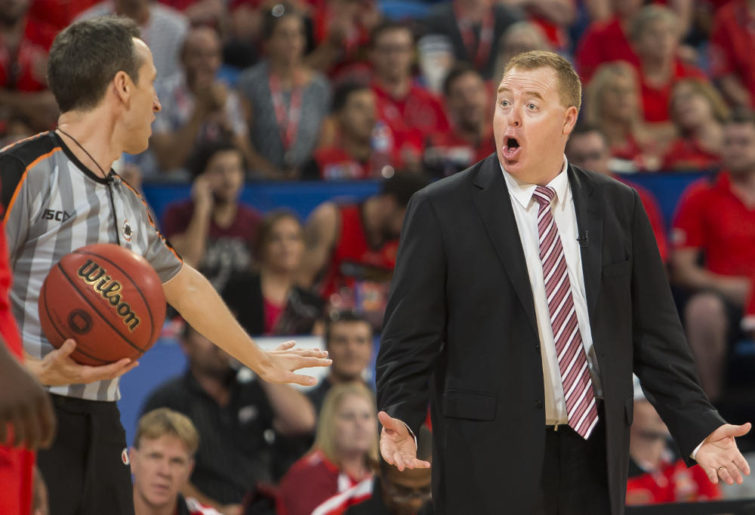 Rob Beveridge has the absolute belief of his playing group. (Illawarra Hawks)

That means that at the very least the head coaching positions of the Hawks and Kings will be up for grabs looking ahead to the 2019-20 season. While the spots at the 36ers, Wildcats and Bullets could very well be joining them.

That opens up the question over potential replacements and while any search for a coach can throw up some unexpected candidates, just looking to within the league already and there are some obvious standout candidates.

It does appear the most obvious appointment would be at the Sydney Kings and that would be to hire Beveridge who has just completed a four-year stint at the Hawks.

With a Grand Final and semi-final appearance from those four seasons with likely the smallest budgets and least resources in the league, Beveridge has continued to prove to be a terrific coach, an outstanding developer of talent and a great man manager.

But his family is settled in Wollongong and that’s where the job in Sydney would be perfect. It’s close enough to avoid any upheaval for his family and he would be paid significantly more than he has been at the Hawks, which he deserves.

If anyone deserves to be well paid for his services to the NBL and to be given a team with the resources to compete for a championship without having to buck the odds it’s Beveridge.

While the Kings will have plenty of candidates banging down their door, it does make sense in a lot of ways for them to settle on Beveridge.

To top it off, he has a built-in tremendous trusting relationship with Andrew Bogut, Kevin Lisch and Brad Newley on that team so the chemistry between three of the key veteran pieces is built in.

Andrew Bogut of the Kings. (Photo by Mark Kolbe/Getty Images)

The joker in the pack for both the Kings and indeed Wildcats is Matt Nielsen.

Gleeson is the Wildcats’ most successful ever coach and if he wants to continue coaching the club beyond this season, he deserves to be given that opportunity. It would be a shame if he went to the club wanting to continue and was turned down.

However, Nielsen has clearly been groomed to be the next coach in Perth having now been senior assistant coach to Gleeson for several seasons and the Wildcats wouldn’t like to see him turn up elsewhere.

If for some reason Gleeson and the ‘Cats part ways, it makes all the sense in the world for Nielsen to take over and keep the successful program going.

But he would be a great fit at the Kings too. Any chance you have to welcome back a past great of the club, if he is ready, is hard to pass up and Nielsen is one of the great Kings players of all-time.

Nielsen was league and Grand Final MVP for the Kings in 2004 in a career that saw him win two NBL championships spanning 244 games for the club with him still the franchise leader in points, field goals, rebounds and blocked shots.

Already the Kings have two genuine outstanding candidates in Beveridge and Nielsen. But with Gleeson’s future unclear, following Nielsen once the finals are over will be fascinating.

Lemanis is about to complete his initial three-year contract with the Bullets. While the first two seasons were rocky ending with wooden spoons, the fact he has got Brisbane back into the playoffs this season should mean the club wants him back.

If Lemanis wants to continue coaching the Bullets beyond this season, it appears a mere formality it will now happen.

What’s happening in Adelaide is certainly fascinating. Wright remains signed to a multi-year contract with the 36ers, but he might feel he has gone as far as he can with this group.

With his daughter also moving back to the United States for college, there is a pull for him to move on from Adelaide. Clearly if he wants to coach on, he’ll stay in charge of the 36ers but the club faces a nervous wait to get an answer.

The obvious decision would be to appoint his assistant Kevin Brooks if it comes to that, but they could also look beyond that to bring someone in start from scratch.

The Hawks are in an interesting position with the departure of Beveridge. They have a good crop of young talent signed up led by Emmett Naar and Daniel Grida.

They should also keep their core of Todd Blanchfield, Tim Coenraad, Kevin White and AJ Ogilvy, but whoever their new coach is has to be given the freedom to make the decision on who the imports are and what roles they are to fill.

Jordair Jett and Cedric Jackson were never going to be a good fit given their similarities and that’s how it panned out. Jett would be a handy returnee and so would Brian Conklin providing the third import was someone of an MVP level – like Demitrius Conger the season prior.

Another man who could put his hand up for vacancies whether it ends up being in Illawarra, Adelaide or Perth could be one of the league’s all-time greats, Lanard Copeland.

He has been assistant to Gaze in Sydney the past three years and right now his focus is on trying to win a championship with the Kings, but he makes no secret about his desire to be an NBL head coach.

“I think most assistant coaches want to be a head coach and I certainly do. What I’ve found out over the years is that you need the right program and fit though,” Copeland said.

“If it is the right then it’s right fit and I don’t want to just take any job or jump into something that might not feel right. I want to continue to learn as much as I can and if the right opportunity pops up then I’ll certainly put my hand up for it.”