A new coach, an improving roster, competition for spots, and a positive outlook might not be enough for the Tigers to make the eight, but as with last season, they will be hovering around the edge of it.

As The Roar’s NRL preview series for 2019 ramps up and we get towards the teams expected to be playing in September, the Tigers know all about only just missing out.

In 2018, they wound up ninth, but with an improved attitude and defensive structure, they will be aiming higher.

Their biggest problem last year was a lack of point-scoring options, and while that got better as the season went alone, they were burnt out from their game-style over the first six weeks.

While they made an amazing start and beat some competition heavyweights, including the Storm in Melbourne, they need to be better at keeping energy in reserves, and ensure they aren’t winning low-scoring games week in and week out.

Michael Maguire will help with that, but he, like Ivan Cleary before him, is a coach who appreciates hard work and a heavy pre-season, so whether they can really adjust their style enough to make the ladder spots up is anyone’s guess.

Given how close 2018 was though, they didn’t end up far away from the top eight, and it’s likely to be the same this time around. 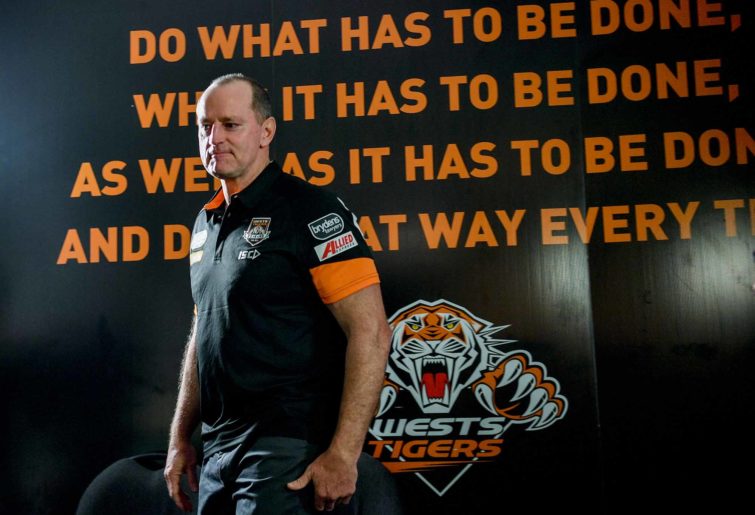 The Tigers have made plenty of changes for the 2019 season, and there is plenty of potential in the recruits, but on the whole, it’s hard to say they outweigh the losses.

Robert Jennings is a late pick-up from Souths who will add plenty of depth in the back line and ensure at least one regular first grader misses out, while Ryan Matterson will slot straight into the back-row.

Paul Momirovski is also a welcome addition to the outside backs, while hard-hitting forward Zane Musgrove joins and will add some real muscle. Oliver Clark has shown potential in lower grades at Penrith as well.

Meanwhile, an underperforming Tuimoala Lolohea has left, but it’s Sauaso Sue – the big front-rower bound for Canterbury – who could be their biggest loss.

Funnily enough, many of the players leaving had poor 2018s, so while there are some good names there, it’s a clear the sign the club is cutting the dead wood.

Spine
Sole captain Mbye is certain to line up at fullback, he has the potential be the x-factor.

While no he is not among the best number 1s in the competition, he is an extremely talented player, has great vision and a running game which is hard to match.

He will need to be at his best though, with questions over his defence, and the rest of the spine. 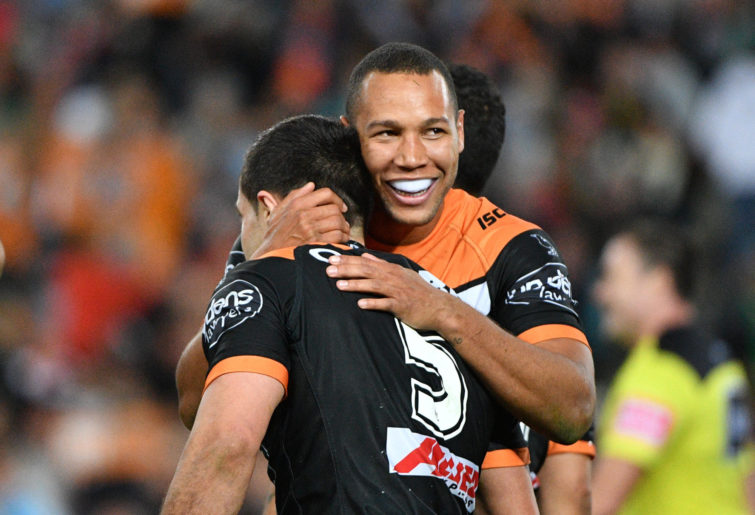 Robbie Farah will wear the number 9 jumper, after a return to form last year.

He wasn’t at his career best, but was still strong, and a combination with the rapidly improving Jacob Liddle – who will be starting hooker once Farah hangs up the boots – leaves the side dangerous there for the entire 80 minutes.

The questions lie in the halves though, because three good players simply don’t fit in two spots.

Josh Reynolds was injured for much of 2018, but he was one of their marquee signings. Add the improvement of Liddle, and the former Bulldog surely can’t play from the bench.

With Luke Brooks certain to have one spot, it’s hard to see a spot in the 17 for veteran Benji Marshall – as much as most fans would love to see him go around again after a controlled 2018.

Backs
Robert Jennings was oh-so dangerous outside Greg Inglis last year and could have a similar combination this year with the Esan Marsters.

Marsters, who may well take on the goal-kicking duties, will line up in the centres with Mahe Fonua, who had an incredible comeback from injury in 2018.

The duo are deadly, and could make their wingers look very good, with Corey Thompson likely to snare the final spot.

The only real question is whether David Nofoaluma gets a run, but I’d wager that with Maguire’s stout defensive policies and the Tigers wingers’ noted issues in that area, he will be watching on from New South Wales Cup for a little while.

Forwards
Ryan Matterson is a strong signing and will add to a rapidly improving pack that features a good mix of experience and youth.

Russell Packer and Ben Matulino form one of the better front-row duos. While inconsistencies and the inability to play big minutes linger as issues, under Maguire, they have had huge pre-seasons and could be in for big 2019s.

Veteran Elijah Taylor will start at lock, although their depth at 8, 10 and 13 looks slim, with only Matt Eisenhuth challenging for a spot in the starting team, or likely to grab one on the bench.

On the edges, Matterson will slot straight in, ensuring Alex Twal and Chris Lawrence come from the bench, while I’ve gone with Josh Aloiai in the other spot. He is hard-hitting, athletic and strong in defence – he could be one of the big movers in 2019.

The only other players who could push for spots in the 17 are Chris McQueen, Zane Musgrove and Michael Chee-Kam, who was surprisingly good last year.

Origin impact
The Tigers might escape the grasp of Origin altogether this year. There could be some players – most notably, Luke Brooks and Moses Mbye – on the cusp, but it’s doubtful.

Can Moses Mbye be the best version of himself?
I have a hunch Maguire is going to bring the best out of Mbye, who has the potential to be one of the better players in the game, but hasn’t quite got there.

It wasn’t all that long ago his name was being tossed around among the utility options for Queensland in State of Origin. While I doubt he is going to get to that level this year, Mbye is solid at the back.

His defence is what will be under the most pressure, but the Tigers had one of the worst attacking records through the first half of the season, and while they were winning games, it clearly took it out of them come the end of the year.

Mbye must play the role of a third half this year.

Will Packer and Matulino do the job consistently?
While their edge defence and scoring ability were issues last year, better productivity out of the front might have just seen them sneak into the eight.

By the end of the season, Matulino averaged only 91 metres per game, while Packer was even worse at 71. Sure, they didn’t play huge minutes, but looking at a game-by-game breakdown, their consistency was all over the shop – there were a few times where Matulino pushed 140, but others where he barely got over 50.

Both are on big money, are marquee signings and could be one of the best combinations in the competition.

If they have more of the same issues this year, the Tigers will move down the table. 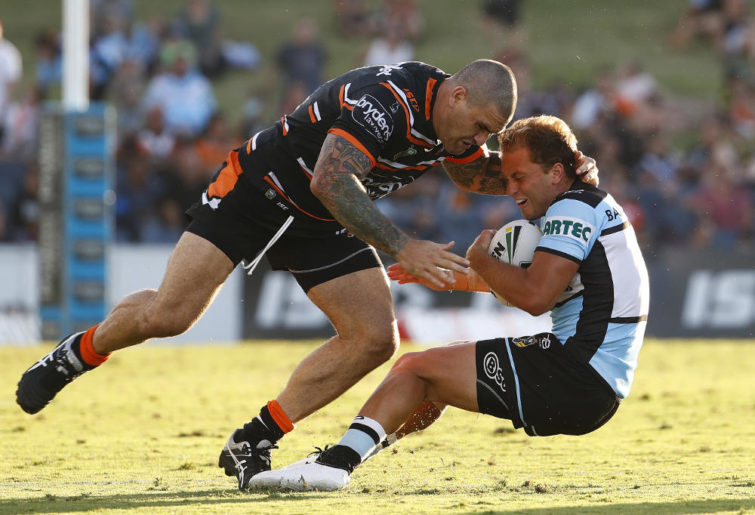 Reynolds or Marshall?
This is one of the big factors which could swing the season.

While we all know the (albeit occasionally frustrating) quality of Luke Brooks, some of that may have come about thanks to the new-found maturity and quality of Marshall.

Known best for his razzle-dazzle footy, Marshall’s excellent kicking game and decision making has come on since he returned from a brief stint in rugby union. Whether at the Dragons, Broncos or Tigers, he has been written off, but then pulled something out of the bag.

Now, all this positive talk about Marshall is going to seem weird because I’ve left him out of my 17, but that’s the way it almost has to be at the Tigers.

Brooks need to take control of the side, running the show with kicking, calling the shots and letting Reynolds play chief ball-runner.

Reynolds was a huge signing and as much as it’s forgotten among injury last year, he is a former NSW Origin player, so has plenty of talent.

He needs to be solid and consistent to play 25 rounds, but with Jacob Liddle in the side as well and Robbie Farah getting on in age, the best thing for team balance is Reynolds wearing 6, and doing it well. 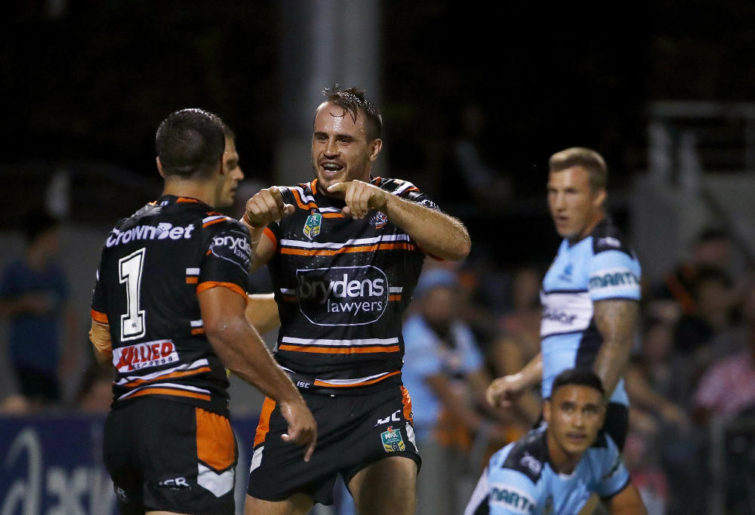 Fixture analysis
Not to bring the Tigers hopes down, but the fixture list hasn’t treated them kindly.

They start with three home games, against the Sea Eagles, Warriors and Bulldogs, but you best believe they need to be three from three.

From there, their season takes an unpleasant turn: Penrith-Brisbane-Parramatta-Tamworth-Sydney-Brisbane-Melbourne-Homebush.

Out of that, their ‘home’ games are in Tamworth and Brisbane – for Magic Round – and while they do have a game at Western Sydney and Homebush, they don’t play any games in Sydney where they are the recognised home team for seven weeks. That’s about as tough as it gets.

There are some tough games as well, with the Panthers, Broncos, Roosters, Storm and Rabbitohs all included.

Their double-up list isn’t too bad though, with just three teams out of last year’s top eight.

The fixture list might be a disaster zone through the first half of the season, but they have what it takes to be challenging for the top eight again.

The input of coach Maguire can’t be talked about enough, and while their pre-season may well have been tough, it’ll leave them in good shape for that daunting trek around the country.

If they click early and pick up a few wins, with the combination of Mbye and Brooks being of utmost importance, there is no reason they can’t sneak into finals contention.

But I’ve got them in the same sort of range they ended up in 2018, with room for improvement and growth in 2020.

Check back in on Friday as we move onto the final team I’m tipping to miss the eight.