Welcome to day three of the The Roar’s AFL Top 50.

30. Adam Treloar (Collingwood)
There haven’t been any Collingwood players in the countdown yet this week, but they’re about to come in a rush, with five today alone.

Adam Treloar is an explosive midfielder, with his signature move breaking away from a stoppage on the wing or at half-forward and streaming towards goal, often putting one through on the fly from the 50-metre arc. That said, he doesn’t tend to take games by the scruff of the neck, but is more of your death-by-a-thousand-cuts merchant.

He’s been an ultra-consistent ball-winner in his time at both the Giants and Pies, but spent more time forward in 2018 than he had previous. Every now and then his kicking lets him down but, similar to Patrick Dangerfield, it’s more about harnessing his momentum and balance that he needs to focus on.

Treloar was rated around about this mark for most of the voters, with only Josh not finding room for him in his personal 50.

29. Dayne Zorko (Brisbane)
Dayne Zorko is a genuine goal-kicking midfielder, with not many of his contemporaries hitting the scoreboard more than he. He’s kicked 83 goals in the last three seasons, no mean feat in a bottom side and playing in a midfield that lacked depth, outside he and the often-injured Dayne Beams.

Because of his damaging traits, Zorko is often tagged and tagged hard, with the downside being that he is susceptible to it. Seven times last year he was kept to 17 disposals or fewer, which isn’t enough for a player being relied upon as a prime mover.

Even though Beams has left, the addition of Lachie Neale and Jarryd Lyons to the midfield mix, along with natural improvement of young players like Cameron Rayner and Hugh McCluggage, plus the potential for Charlie Cameron to spend more time in there, means we might see Zorko get off the chain more.

Ryan had Zorko as high as 16, Jay had no love at all, while the rest of us were around this range.

28. Jackson Macrae (Western Bulldogs)
Jack Macrae has always been an enormous accumulator of the ball. Disregarding matches where he was used as the sub, he had four games where topped the 30-disposal mark in his first 15, all as a teenager.

In the last two years, he has added more inside work to his game, getting his contested possession percentages up into the 40s from 33 per cent in 2016. He also led the Dogs in clearances last year, averaging more per game than noted specialists like Josh Kennedy, Ollie Wines and Joel Selwood.

While Macrae feels like he has been around a long time, he’s only played six seasons and is just now entering his prime. If he can become more damaging in the front half of the ground and kick 20-25 goals a season (he only has 29 from 118 matches), then he can move into the truly elite.

Macrae was quite divisive among the panel, with Josh and I putting him at 14 and 15 respectively, while the others placed him in the high 30s to low 40s. Something in the low 20s feels about right.

27. Rory Laird (Adelaide)
Rory Laird is arguably the best running back in this half-decade. There is nothing flashy about the way he conducts his business, but pristine decision-making and pin-point disposal are his stock in trade.

While critics might accuse Laird of stat chasing, when you distribute with as much surety as he does, getting the ball in his hands as often as possible is the best thing for the team. And while he’s of a diminutive stature, he’s no mug when the ball is in the air either. He’s just a very professional footballer, and the best at what he does.

Josh had Laird as high as 15, Adrian was the lowest at 47. Everyone else had him extremely close to this figure. 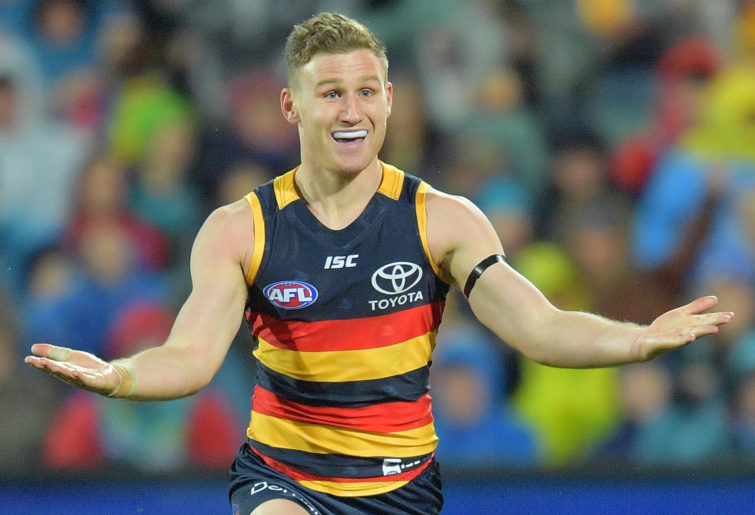 26. Dayne Beams (Collingwood)
Dayne Beams has long been one of my personal favourite players. Hard-running, dual-sided, courageous, skilled, strong inside and out, and a noted goal-kicker. He really doesn’t lack for anything.

Beams has had a lopsided career, playing in more wins in his first three seasons than in his subsequent seven. In fact, he had as many wins at Collingwood in his first year (11) as he had in his entire four years at Brisbane.

This midfield was already overflowing with talent and now he’s back, so how they all work together and through the forward-line will be a story through 2019.

One of the talking points of the off-season was how Champion Data could only rate Beams as “average” in their player ratings, bearing in mind they weight everyone against players from their own position. There were no real outliers in our voting, with a high of 18 from Jay and a low of 41 from Adrian.

25. Jordan De Goey (Collingwood)
Last season was Jordan De Goey’s arrival, and it was no small coincidence that Collingwood catapulted from 13th all the way to a grand final appearance as a result.

Every now and then a player comes along to represent brute force and explosiveness for his generation and De Goey is that man. Opposition defenders bounce off him when he charges through, he’s good in the air and better on the ground. Already, he has an aura about him that makes opponents gulp when they find themselves one-on-one deep in the Magpies’ 50.

A natural forward, De Goey can also rack up numbers in the middle when let loose in there. He’s got Dustin Martin qualities, and is growing into them very, very quickly.

Where to rate the rising stars of our game is always a tough question, given we assume they have nowhere near reached their peak yet. But how quickly will they get there? I was the highest on De Goey, placing him at 19, with Jay not far behind at 21. Ryan and Josh were a bit more circumspect, putting him in the 30s, with Adrian somewhere in-between.

24. Scott Pendlebury (Collingwood)
While De Goey is on an upward trajectory with a bullet, Pendlebury is a falling star. The two are separated by over 200 games and nine seasons, and couldn’t be more opposite from each other, but one of the things we love about this great game is the different types that make it up.

Pendlebury has brought joy to many a fan, gliding across the turf with grace and disposing of the ball with silky hands and feet. Having ‘time’ is the rarest skill among footy players in such a high octane, 360-degree sport – we can’t measure it except with our eyes, but we know it when we see it, and every now and then it takes our breath away.

Pendlebury has averaged 17 votes a season in the Brownlow over the last ten years, a testament to his quality, consistency and durability, and it is a great pity that it looks like he will never win one.

Ryan is the biggest believer in Pendles, rating him at 18, while Adrian has lost the most faith, putting him at 34.

23. Steele Sidebottom (Collingwood)
Steele Sidebottom has been an uber-consistent contributor for a decade now, never quite finding himself among the elite players of the competition, but always on that rung below. He is coming off a season which was clearly his best.

Sidebottom roams far and wide to get the ball, with few covering more territory. He’s also one of the best opposite-side players in the competition. A hard-running, endurance type, he uses these assets and his mental strength to keep running when others are feeling the pinch, and thus gets free for teammates to find him.

And while he is an outside player, Sidebottom had 26 contested possessions in a match last year – more than the likes of Patrick Cripps, Clayton Oliver and Paddy Dangerfield could claim.

Jay sees Sidebottom as the 13th best player in the competition, and Ryan has him at 20, while the rest of us were in the mid-20s to low 30s.

22. Luke Shuey (West Coast)
Last year, only one Roar voter put Luke Shuey in their top 50 – in fact placing him at 19 on his personal list – for an overall rating of 49 on our 2018 countdown. That voter shall remain nameless, but he is a prescient fellow and let’s just say self-congratulations is nothing to be ashamed of.

A Norm Smith medal will do wonders for a reputation, and this year Shuey climbs up to a position more representative of his standing in the game, despite on the whole having less impact in 2018 than he did in 2017.

Josh, Jay and myself can hardly complain about Shuey’s rating in this countdown, given we all had him at 22 in our personal lists. It’s probably the first time the three of us have agreed on anything.

21. Callan Ward (GWS)
Callan Ward has been a beacon of consistency and leadership since the inception of Greater Western Sydney. He’s the one player at the Giants who would rather be good than look good, but the beauty of him is that he is both.

There may be players as hard at the footy at Ward, but none are harder. His body is a battering ram, yet he’s played 95 games in a row, and has missed no more than two games in any season at GWS. He uses the pill well, and has a knack for kicking a captain’s goal.

The Giants have often been accused of lacking substance as a football club, but it’s a hard label to make stick with Ward leading the way.

Josh was the big outlier with Ward, ranking him at 45, while the other voters had him somewhere between 16-25. 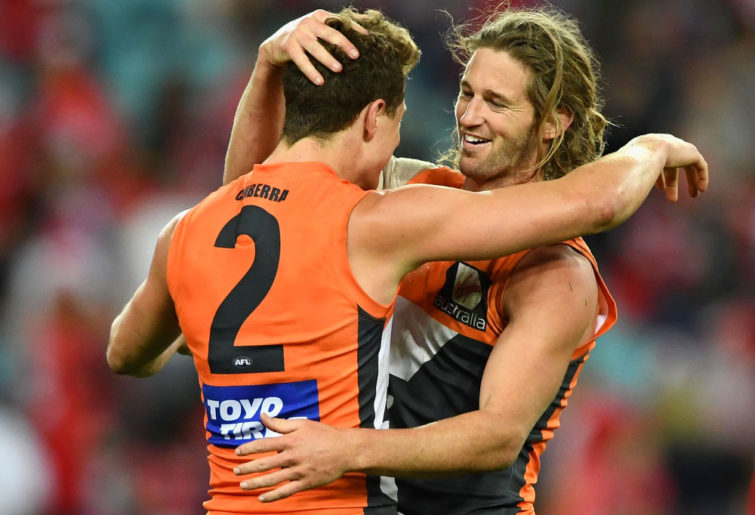 Don’t forget to come back tomorrow and check out Adrian’s write-up of players 11-20, as we get into the meaty end of the countdown.