Last year saw a gaping chasm between the top 12 teams in the competition and the bottom six. But can the Lions break away from the bottom in 2019?

The Lions had a percentage of 89.1, far superior to the next-best Bulldogs, which was an indication of their overall competitiveness compared to their rivals in the dungeon. They averaged 83 points per game, which was more than sides like Sydney and Port Adelaide, and almost two goals clear of the next best bottom-six team St Kilda.

Interstate wins are a big fillip for a side trying to make their way up the ladder, and Brisbane had victories in Perth over Fremantle and in Tasmania against Hawthorn in the second half of the year, to signify real progress. They also lost to Collingwood, North, Port and Adelaide by single-figure margins, which they will have learned much from.

Can the Lions now break free of the bottom six?

One of the biggest talking points in the trade wars that defined the 2018 post-season involved Brisbane losing Dayne Beams back to Collingwood, but gaining Lachie Neale from Fremantle. Both players are in the conversation for top 25-30 in the competition, so the Lions were losing a gun but gaining one too. But they also gained Jarryd Lyons from Gold Coast, Marcus Adams from the Bulldogs and Lincoln McCarthy from Geelong, a trio that could prove to be a nice little haul that will add some bite to each area of the ground.

Beams averaged 11 contested possessions, 5.6 clearances and three tackles a game last year. Neale and Lyons combined averaged 29, 14 and 10 in those categories. They are significant figures who allow Dayne Zorko to play a more dynamic outside role through the midfield and forward of centre.

Stef Martin does a lot of clearance and contested work as a ruckman, as well as linking effectively across the ground. Charlie Cameron can hopefully get involved more in the middle, as he possesses special qualities that others do not. Mitch Robinson is the wrecking ball that can shut down opponents if required, or gleefully work them over.

Most exciting for Brisbane fans is the thought of a second pre-season under the belt of Cameron Rayner and what he might be capable of as he takes more steps forward in his AFL evolution. We saw some spectacular highlights last year, and need to prepare room in our scrapbooks for more.

And let’s not forget two 21-year-olds Hugh McCluggage and Jarrod Berry, both first-round draft picks, entering their third seasons. Both have shown they have what it takes to be an integral part of a successful midfield, and will also benefit from more experienced players like Neale and Lyons being added to the mix.

Harris Andrews was rated the third-best key defender in the competition in the Roar Top 50, behind two superstars in Alex Rance and Jeremy McGovern, and is becoming more of an offensive weapon as each season passes. Still only 22 himself, there has been talk of trialing him up forward during the pre-season.

Marcus Adams is one of the most imposing specimens in the AFL and just needs to stay fit to prove his worth, but this is easier said than done.

Luke Hodge provided effective service in his first year at the Gabba, and no doubt an abundance of leadership and education. He can’t run out of sight on a dark night these days, but is still a canny positioner and user.

Darcy Gardiner, fourth in the 2018 best and fairest, can play tall or small and has license to create in the back half, although Daniel Rich and Alex Witherden are the leaders in this regard.

The new rule changes have been made to promote more direct play, which suit both Rich and Witherden. Opposition zones will need to be set far and wide when Rich has the ball in hand for a kick out, which should allow him to pierce shorter kicks into gaps to open the field up beyond them.

Up forward is where Brisbane look a little weak, even though we have already noted they were ranked 11th in points scored last year. 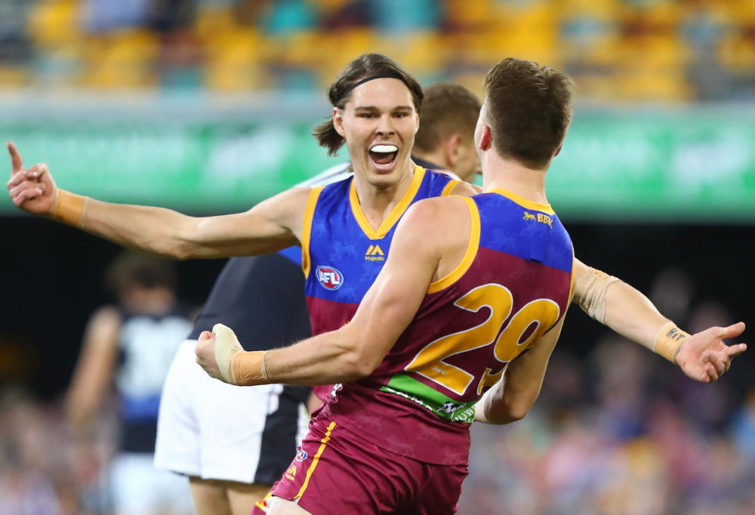 People want Eric Hipwood to make outlandish progression, but he showed steady improvement in 2018 compared to the year before, and can be expected to do so again. His second half of the season was better than his first, which might suggest a quantum leap is coming. His athletic instinct will be a pleasure to watch.

Daniel McStay went forward again in 2018, and has a good pair of hands when his confidence is up. Hipwood is 21, McStay 23. Plenty of room for growth.

Lewis Taylor plays his role in the forward third or half of the ground. Lincoln McCarthy might surprise a few who haven’t seen much of him – he’s a very clean footballer, a natural ball-handler, creative and clever.

Brisbane’s suite of double-up matches doesn’t look the hardest on paper. They handily beat Hawthorn both times they met last year, and get another two chances this season.

The Western Bulldogs, Port Adelaide and Gold Coast are also on the agenda, all three picked as bottom-six candidates in this preview series.

North Melbourne is the other club the Lions play twice, a team they could easily have beaten in Round 20 last year.

Chris Fagan has Brisbane playing a direct and attacking brand of football, which may well be rewarded this season, given some of the rule changes.

Maturity and experience are being gained at the same time as the still young list develops, so week-in, week-out consistency can’t be expected.

The Lions showed last year that they are on the right track, and it’s reasonable to think they will break clear of the bottom six this season.