Teams like the Matildas are just easy on the eye

It is always a pleasure to blog international football and write on the Matildas’ performances.

That was certainly the case on Sunday night when the national team produced another polished display to put the dangerous Korea Republic to the sword at Suncorp Stadium.

The Aussies are currently ranked sixth in the world, an amazing achievement for a nation of Australia’s size, especially considering the entrenched sports and activities that saw football take an eternity to significantly impact the national sporting radar.

While the previous few months have been far from desirable in terms of preparing for the World Cup in France this June, the turmoil now appears to have been jettisoned.

The Matildas opened their Cup of Nations campaign with two professional performances, a pair of wins and now appear likely winners of an event that has brought New Zealand, Argentina and the Koreans to our shores.

The mere fact that Australia is hosting a tournament with four World Cup qualified teams shows just how far the game and our team have come over the last quarter of a century.

Frankly, it is no wonder. Watching the Matildas is such a pleasant and easy experience. I’m sure a component of that pleasure stems from the team’s success. The steady rise through the rankings over the last decade has been the result of good, old-fashioned hard work, a successful W-League that attracts top-notch international players, and quality coaching and instruction that has led to an attractive style of play.

Sadly, that coaching has been the centre of attention recently. Yet however things ultimately pan out for the previous coach and those who seemed keen to remove him from his post without a clear explanation as to the reason, the body of work done to mould and shape the current crop of players was there for all to see on Sunday night. 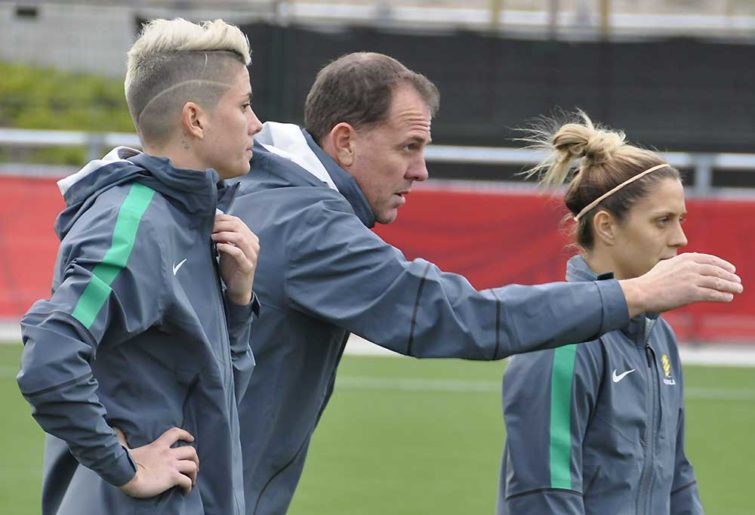 In short, the Matildas entertained relentlessly and the Koreans had few answers. The visitors did manage a goal and Ellie Carpenter will be disappointed with her foul that led to the set piece, however the overall flow of the match was a steamroller-like performance by the Australians.

The Matildas won the lion’s share of possession (67 per cent) yet watching the game it felt nearer to 80 per cent. From the early minutes when Tameka Butt and Carpenter began making inroads down the right flank, the visitors looked in all sorts of trouble and most pleasing for new coach Ante Milicic will be the fact that the threat was sustained and the foot rarely taken from the pedal.

Lisa De Vanna was back on the score sheet after a frustrating 12-game stretch without a successful strike. Emily Gielnik produced a stunning right-foot effort from the left side of the box to score Australia’s final goal of the night and either side of De Vanna’s goal, superstar Sam Kerr scored twice; the first from a penalty and the second after a lovely through ball just prior to the halftime break.

The substitutions made were numerous but each time another woman took to the pitch, she slotted into the structure and added even more impetus and purpose to the cause.

Caitlin Foord enters up top and Kerr takes a break. The run of Butt is replaced by the exciting Princess Ibini, and the dangerous Hayley Raso leaves the pitch only for Gielnik to make an immediate impact.

All the while, our women play the game in such an expressive, confident and creative way. Sure Kerr is a genius, we all get that, however the bubbling enthusiasm and obvious appreciation of the opportunity they have been given in wearing the national strip is clear.

The Matildas never look jaded, bored or spoiled, and that demeanour and aesthetic comes through television screens in spades. There may be an element of frustration at times, such as last Thursday when the pesky Kiwis sat deep and built a defensive block that was tough to break down.

Yet the positivity remains in the Aussies’ mindset, and the willingness to play out and approach the game in an attacking manner is ever present.

It makes them so easy to watch and enjoy. Personally, it always makes me emotional. The idea of a young girl, desperately wanting to play competitive sport and finding under-developed or non-existent pathways to it, is thankfully, a thing of the past.

Knowing that I was around to see the birth of the professional women’s game in Australia is to have a privileged awareness of history. Moreover, the knowledge that the Matildas will head off to a World Cup with a chance at victory is somewhat mind blowing, considering the years of angst that the battling Socceroos have given me.

There may indeed come a day when the Matildas are a stodgy under-performing team; bored and tired with international travel commitments and offensively impressive bank balances.

However, for now, they are quite simply a wonderfully entertaining and refreshing football team to watch.

The Argentinians will have the best view in house on Wednesday night in Melbourne, when the Aussies scythe through their defence and raise the Cup of Nations trophy.