Why possession is nine-tenths of the law

It has been a tumultuous ten days in the world of rugby, both north and south.

Super Rugby 2019 got off to a cracking start, Wales successfully launched their ambush on English Grand Slam hopes in Cardiff, and World Rugby were busy publicly pedalling away from an ill-conceived plan – the so-called ‘World League’ – to yoke the two hemispheres together.

In Cardiff, the gleaming England chariot swung into the Principality Stadium on the back of confident predictions of a 15-point victory. By the time it exited the Brynglas tunnel into the harsh glare of an early Sunday morning in Newport, the image had been tarnished. Many more defects in the running gear had become apparent.

As the team bus passed the abandoned toll-booths on the Severn Bridge, some of the England coaches and players may have reflected, rather ruefully, that a steep price has still to be paid for a victory against Wales on their home soil, and in front of their own people.

If it was an inflated sense of expectation which set the scene for Warren Gatland’s ambush – with one well-respected pundit claiming that only one Welsh player would make it into the England starting XV in the week before the game – it was two zones of overlapping tactical fire which brought his plan to fruition.

Wales defused the English kicking game, which had proven so potent and productive in the previous two matches against Ireland and France. England had kicked 80 times in those fixtures, but Wales switched left winger Josh Adams over to the right to stymie Jonny May, and Liam Williams set about proving once again that he is the premier fullback in the northern hemisphere. There were no weaknesses in the Welsh backfield.

Gatland’s men then concentrated on keeping most of the ball that England were kicking away. They controlled it on the ground, building 62 more rucks than their opponents and forcing England to make 91 more tackles during the game.

This, in turn, gave them control of territory and possession, and the penalty count in a second half, when the tourists barely managed to fire a shot in anger.

The Crusaders pulled off a similar trick in Brisbane, rarely looking anything less than comfortable in a 22 points to 12 win over a lean- and hungry-looking Queensland Reds side.

Although the stats weren’t as spectacular as the encounter in Cardiff – the Crusaders built 36 more rucks and forced the Reds to make 44 more tackles – they still enjoyed a healthy 60 per cent advantage in territory and possession, compared to Wales’ 65 per cent. This meant they were able to keep the Reds’ final-quarter comeback at arm’s length.

Holding on to the ball sounds like an easy exercise, but in reality it depends on a huge effort of concentration and technical excellence across all 23 players in a match-day squad.

The Crusaders announced their intentions at the very first attacking lineout in the sixth minute of the game.

Apart from accuracy at the cleanout, one of the main techniques utilised by an attacking team intent on holding on to the ball for long periods of time is the creation of ‘long rucks.’

The days when you could simply dive past the tackle zone and embrace a defender well beyond the point of contact are long gone. If you do it, you’ll attract an automatic penalty, and that was the result when replacement prop JP Smith held onto Bryn Hall on a Reds scoring play late in the second half: 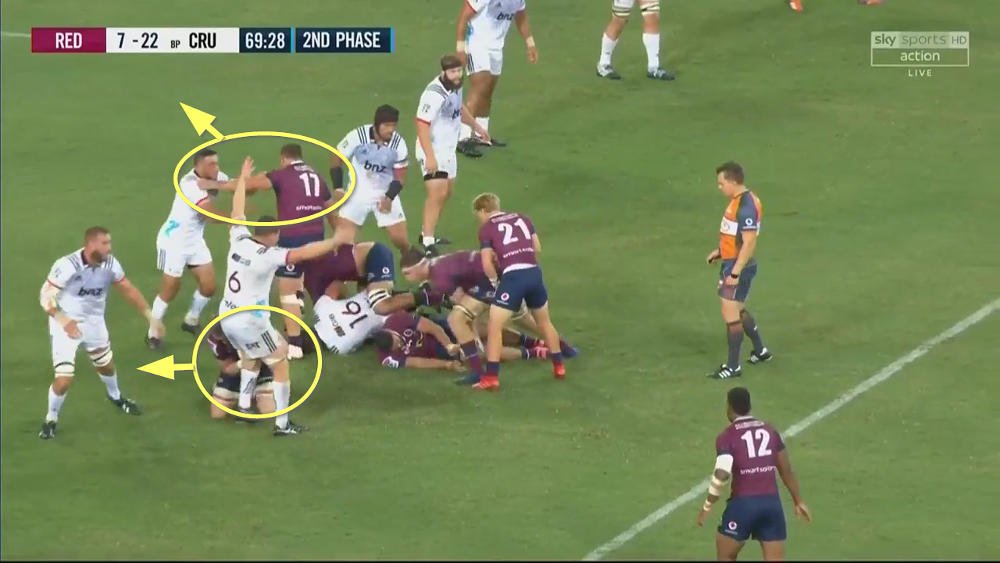 There are two potential penalties in this snapshot: the hold on Hall and the tackle on Crusaders number 6 Tom Sanders, again disconnected from the main body of the ruck.

The Crusaders looked to create a high offside line for the defence in order to keep potential disruptors well away from their halfback, with their cleanout players lengthening the ruck while remaining in contact with the original tackle zone: 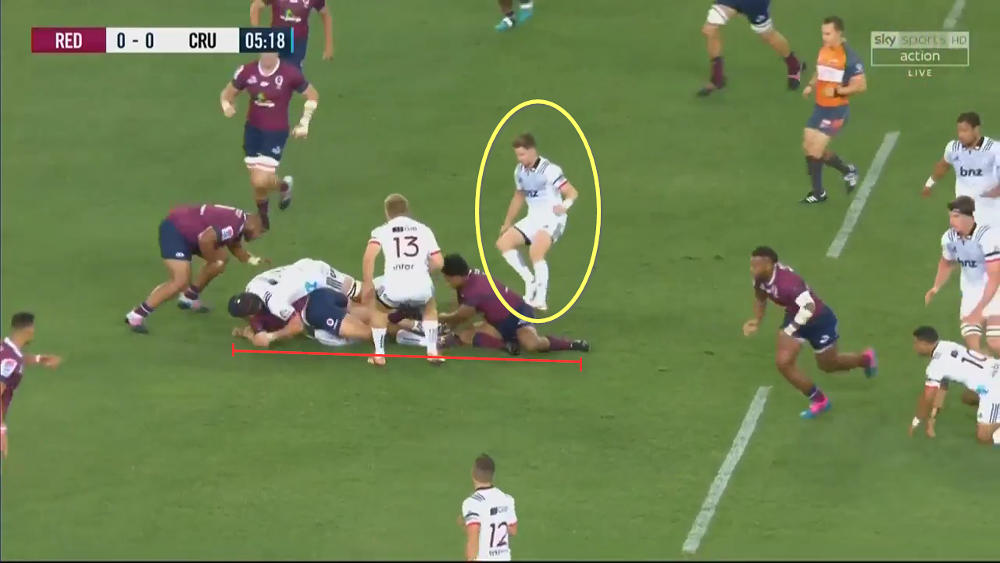 Number 7 Matt Todd has no technical reason to clean out Hamish Stewart, who has already fallen over and is no threat to the ball. He does it to lengthen the ruck and allow his halfback, Mitch Drummond, a clean view from the base. The nearest Reds’ defender is at least two metres away from the scrum half when he goes to the play the ball.

It was a technique the Crusaders used in both attacking and defensive situations to give Drummond a free ride:

Again, it is Todd launching into his opposite number Liam Wright and extending the offside line well beyond the ball while remaining connected to the tackle area: 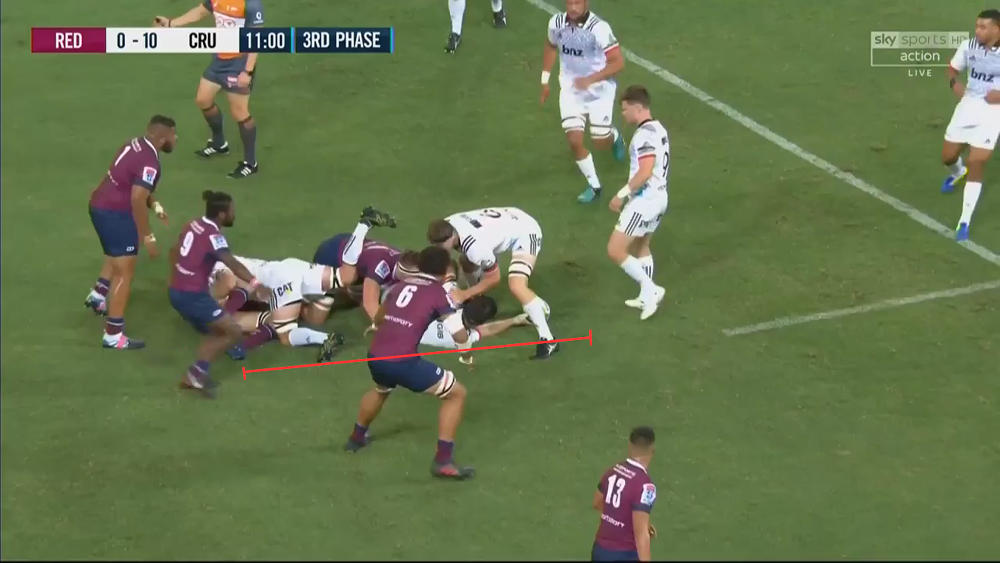 The length of the ruck gives Drummond all the time and space he needs to put up the defensive kick.

The connection between quick ruck ball and line breaks against a defence still in the process of regrouping is a well-known theme, but it is the process of extending a cleanout body well beyond the tackle line which often creates it:

In this case, it is Scott Barrett who extends into Angus Scott-Young out on the right, which in turn gives Drummond free rein at the base. That creates a small seam between the Reds’ E and F defenders for Whetu Douglas to exploit on the switchback phase.

Returning to the earlier sequence, by the fifth/sixth phase, the accuracy of the Crusaders’ work in contact was beginning to pay concrete dividends:

First, Owen Franks delivers the ball off the ground and straight into Drummond’s hands, giving him another easy, unimpeded pass. Then the next pod of Crusaders forwards form a nice protective pocket in front of Joe Moody’s carry after the loosehead is brought to ground.

The Crusaders cleanout is not blocking any defender as flagrantly as JP Smith or Izack Rodda in the Reds’ instance – they are not holding or tackling players outside the ruck perimeter – but nonetheless, the Queensland defenders have to go the long way round to get to the scene of the next action: 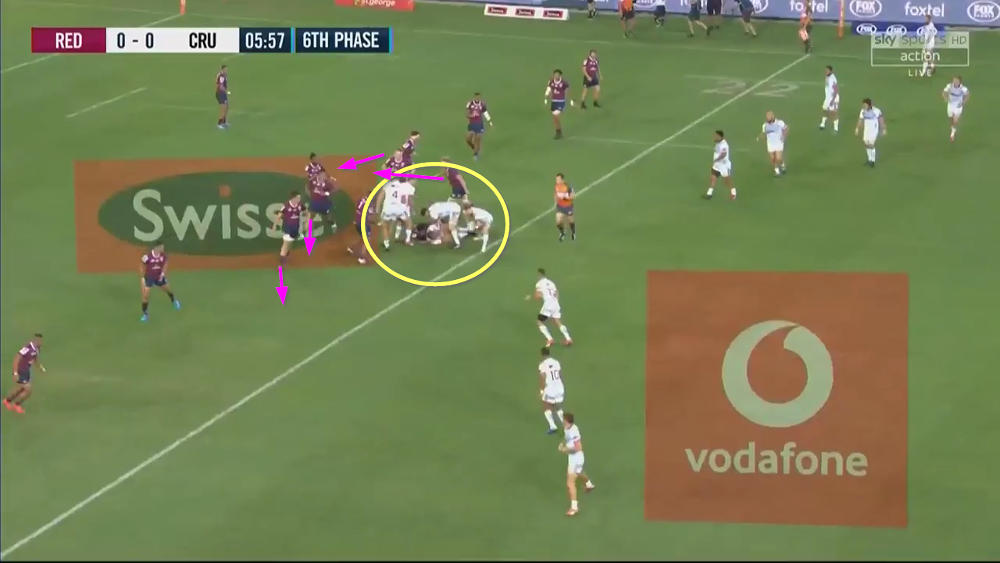 The remainder of the sequence can be seen on the highlight reel at 0:27:

A second, complementary aspect of the Crusaders’ work in contact was the intelligent timing of their release of the ball after the tackle.

Under pressure from the Reds’ kick-chase, fullback Will Jordan tended to delay the release until his support was fully in place:

When the Reds were threatening to turn the ball over directly at the breakdown and the odds did not favour the cleanout, the ball-carrier opted for a much quicker and more pro-active release:

In this instance, Reds hooker Brandon Paenga-Amosa is quickly over the ball and it will be a difficult cleanout indeed for Richie Mo’unga, so left winger George Bridge chooses to roll the ball back directly to Drummond, and the attack continues seamlessly: 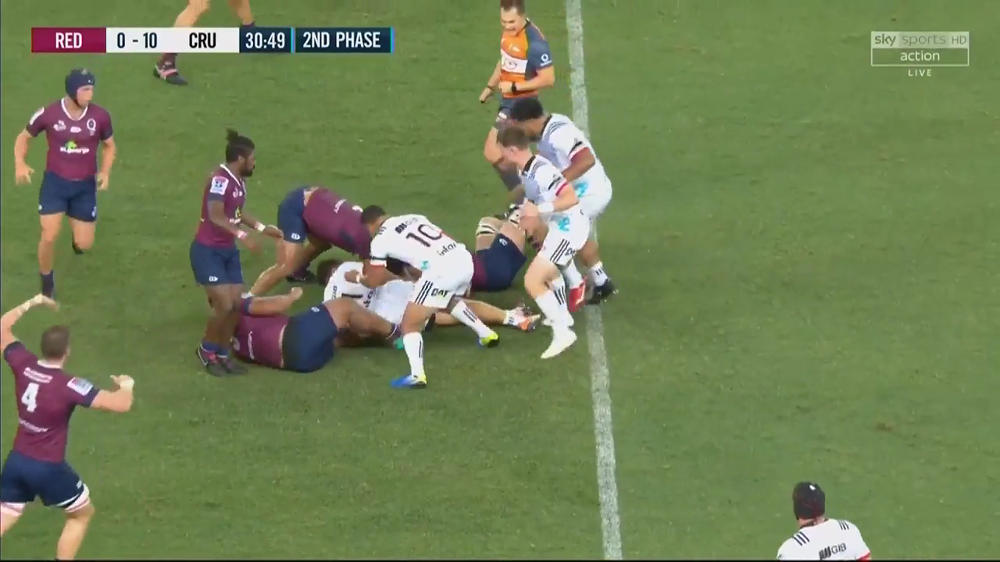 Summary
With the number of successful rucks on the increase, possession of the ball has never been so important as it is now, whether it is playing keep-ball or kicking it away to get it back on favourable terms. Possession is, indeed, nine tenths of rugby law.

In preparation for the showdown in Cardiff, Wales clearly understood that England were likely to kick the ball away somewhere between 30-40 times in the game, and that represented a significant chunk of possession. So, they focused on making dominant receipts in the air, then keeping the ball for long periods on the ground after the catch. 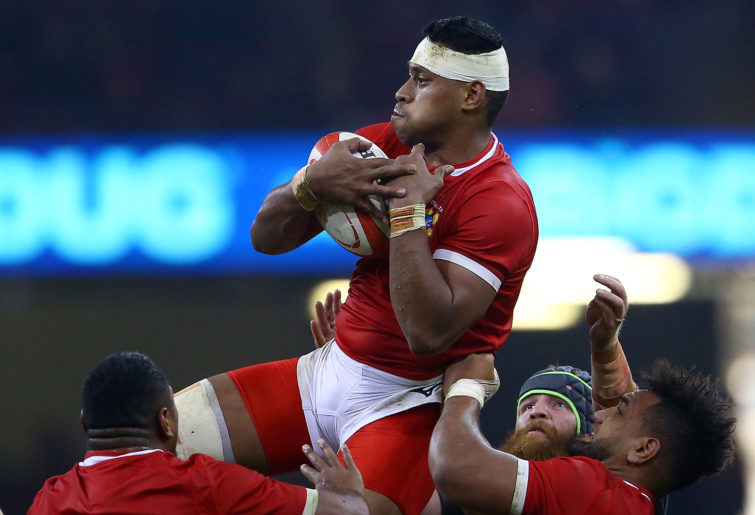 England never looked likely to have the same success against a well-organised Welsh backfield that they had enjoyed against Ireland and France, and the balloon of expectation from their first two games was punctured with a bang.

The fate of the tournament as a whole remains undecided, however. England should finish with four wins and more bonus points than anyone else, while Wales have to make a difficult trip to Murrayfield before their final match against Ireland. The fate of the competition still lies between those top three nations.

The Crusaders took up the theme of possession rugby and gave it a southern hemisphere twist in their game against the Reds in Brisbane. They controlled the tempo of the match, kept the Reds well away from both the ball and their scrum half Mitch Drummond, and created the bulk of the scoring opportunities.

The technical excellence of that achievement should not be underestimated, and the lessons from it – in terms of timely ball placements and long ruck extensions – may need to be re-learned by Michael Cheika if he wants to play the possession game and avoid kicking with the Wallabies in 2019.