This week, Panthers general manager Phil Gould made an attempt to minimise the damage to his club by saying sex tapes are occurring “in all walks of life”.

Two other Panthers players featured in the footage in what was a rough week at the foot of the mountains.

So – because it’s his job – Gould got in front of a camera and did his best to douse the growing flames.

“Talking to people in circles who deal with this every day – court judges and police and all that sort of thing – we’re dealing with this in all walks of life,” Gould told Channel Nine.

“And the real worrying thing is that this is conditioned into the kids in the schools. This age of technology and mobile phones and cameras, it is commonplace from a very, very young age. Kids will be sharing videos and explicit videos.”

To be fair to the Penrith boss (I don’t why papers use the term ‘Panthers supremo’ – it sounds like an exotic, illegal burger) he also said feeling let down by his playing group was the “bare minimum”.

But the message he wanted to get across was that sex tapes were “extremely widespread”. 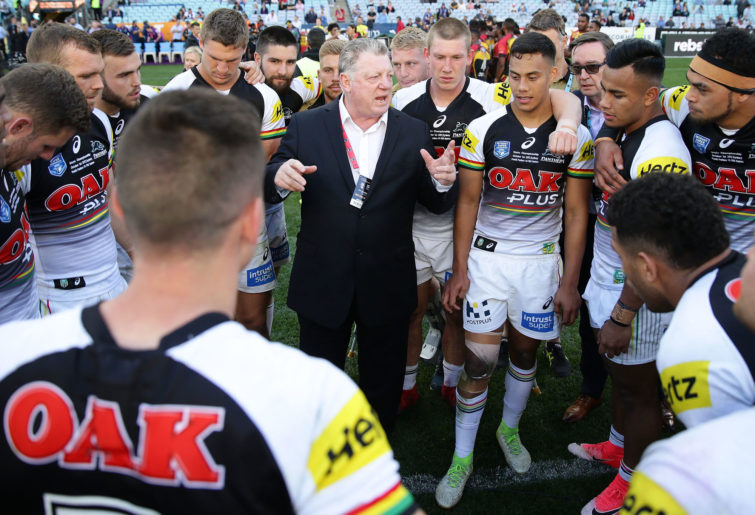 I don’t doubt it for a second. Phones are everywhere and people these days film everything. That it extends to the bedroom is really no surprise.

But, pray tell, where are all the sex tapes featuring AFL, Super Rugby, A-League and cricket players? Why is it that we’re pretty well only talking about on-field matters for those games?

Sex tapes may be commonplace in 2019 and sending it around to your mates might be the done thing. But why is only one of Australia’s major codes dealing with scandals of this nature?

To be fair to the NRL, there’s definitely been fake news concerning the issue.

This week, Andrew Webster reported on a tape doing the rounds in which two unidentifiable people are doing the no-pants dance, the man saying to the woman: “How good is rugby league? How good is it? How good? Huh?”

It’s reminiscent of Sam Sweet’s trial in The Cable Guy: “My twin brother’s been shot. I think it was an Asian gang or something. I saw someone, he looked Asian and he… he was speaking another language. I’m pretty sure it was… Asian!”

Then there was the video of blokes treading on a woman’s head as she engaged in a sexual act, the whole thing featuring a disgusting caption.

It came to light as the Penrith videos were doing the rounds, so it was said to be another NRL sex tape.

The problem with such an assertion? The males in the video had their shirts pulled over their heads to obscure their faces. No footy player is that smart!

But here’s the thing – no one’s putting these bullshit videos out and saying: “It’s the Wallabies!”

Maybe not forever – maybe not even next week – but at the moment, this is an issue that no other code in the country is dealing with.

And sure, maybe all the kids are filming themselves as they have sex. Maybe every player in the AFL and A-League has phone in hand when their pants are down.

But that footage isn’t going viral. Presumably because, after filming it, it isn’t sent to a third party.

Best-case scenario – and it’s a narrative that the affected clubs have been keen to push – someone with an axe to grind is putting these videos into the public domain.

Still though, why do these people have the footage in the first place? Maybe a phone got lost or stolen and ended up in the wrong person’s hands? Yeah, sure, that might be it – although, as an aside, your cognition is impressive for someone who was born yesterday.

Look, I’m not breaking fresh ground by saying how we got to where we are. The question is where do we go from here.

And my concern is that the NRL will look at this and says, “This debacle has been instructive about how we teach our players to use their phones and social media.”

Because while players need education on those issues, they’re symptomatic of what’s really at play here.

This is an issue of respect and – as has been made abundantly clear by the charges May faces – consent.

Sex tapes aren’t the root cause of the issues the NRL is facing at the moment, it’s ultimately about young men treating women like dirt.

That’s the issue the game needs to address.