The first race of a new season of IndyCar racing doubles as the beginning of a new era for the sport, with a brand-new series entitlement sponsor (Japanese company NTT Corporation), a new exclusive television home in North America (the powerful NBC Sports Group) and lots of forward momentum for a series that has felt stalled in recent years.

Is there a better place to kick off a new year than on the sun-drenched streets and airport runways of St Petersburg, Florida? Other than the Gold Coast – fingers crossed for 2020 – St Pete has become the traditional opener, having been on the schedule for more than a decade, and the 2019 iteration didn’t disappoint.

Read on for talking points from IndyCar’s South Florida party.

2019 IndyCar coverage in Australia
Some disappointing news to start, because St Pete marked the start of a new era of IndyCar coverage in Australia. Unfortunately most races will be covered as one-hour highlights packages on Fox Sports, a drastic backwards step after years of live or same-day delayed full-race broadcasts. Sadly, with no international streaming option – unlike NASCAR, which made its TrackPass streaming service available here after stock car racing coverage was axed – there is no legal way to watch IndyCar races in 2019.

It’s a hugely tough pill to swallow, and while it’s easy to blame IndyCar, I can’t imagine that the series doesn’t want Australian television coverage. Consider Will Power’s position as Indianapolis 500 champion and the fact that the series is actively trying to bring back a Surfers Paradise race perhaps as early as 2020, and it doesn’t make any sort of sense – not when there’s arguably more interest and IndyCar exposure now than there’s been in 20 years.

IndyCar can’t make anyone broadcast their races, and I tend to think they took the best deal they had on offer, which evidently was mostly highlights packages. Some TV presence is better than none, and IndyCar CEO Mark Miles hinted in a Racer interview that a lot of these new broadcast deals – the in-house IndyCar Media took over international distribution after years of it being handled by ESPN International – are short and, further, that there could be a streaming solution for international viewers sorted for 2020.

The good news is that the 103rd running of IndyCar’s crown jewel event, the Indianapolis 500-mile race, of which Australian Will Power is the defending champion, will be broadcast live and in full by Foxtel, a piece of news that leaked out Monday and Tuesday in Australia. That’s better than no live coverage at all.

And don’t forget that IndyCar Radio is wholly and completely free on phones and tablets via the IndyCar App, TuneIn or the IndyCar Radio website. You can find live broadcasts of all Indy Lights and IndyCar Series sessions on that platform. The broadcasts are anchored by venerable coice of the Indianapolis 500 Mark Jaynes and are your lifeline to live IndyCar racing if you’re a diehard fan like me.

Now that we’ve got that down, onto the racing

Josef Newgarden wins
How good was it to have IndyCar racing back on track?

Safe to say, Josef Newgarden was glad to be back at it for 2019. The Hendersonville, Tennessee, native took the twin chequers in a pretty entertaining race that featured eight lead changes among four drivers, coming home ahead of Kiwi Scott Dixon, Australia’s Will Power in third and impressive Chip Ganassi Racing rookie, Sweden’s Felix Rosenqvist trailing the defending Indianapolis 500 champion in fourth.

While Newgarden dominated from mid-race on, leading 50 of the last 60 laps, it was Rosenqvist and Power who engaged in a spirited duel at the front of the field in the opening half of the 110-lap event, and Rosenqvist will be left wondering at what might have been after slow pit stops – a rarity for Ganassi – dropped him down the order and took a little of the shine off of what had been a stunning debut, leading 31 laps.

It was a big win for Newgarden, who endured a disappointing 2018 season after winning the championship in 2017 – he had only three podiums all year, all race wins. The American star continued a white-hot start for Team Penske drivers in 2019, with NASCAR Cup and Supercars triumphs. And just maybe the Tennessean signalled that the expected Dixon vs Rossi duel for the overall championship might become a three-way struggle. 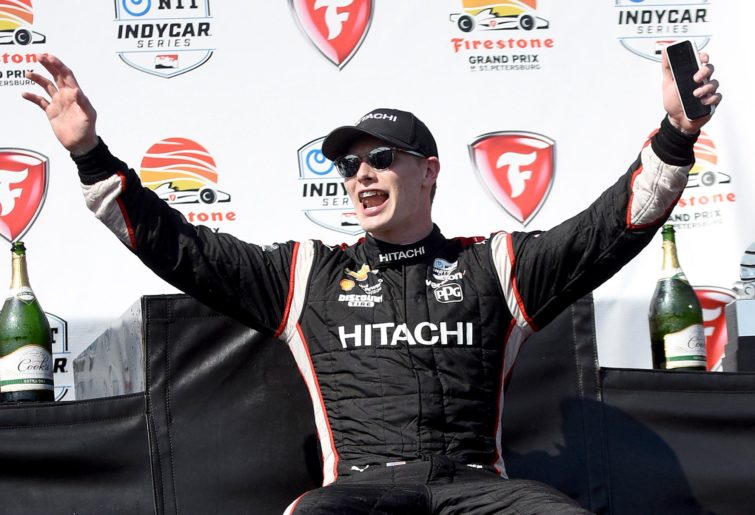 Rookies impress
I can’t remember a better rookie class than there is in the 2019 IndyCar Series. I documented the impressive debut of Felix Rosenqvist above, but that’s only part of the story. The massively touted American Colton Herta, driving for Harding Steinbrenner Racing, finished eighth, one position ahead of another American, Santino Ferrucci, in the sole-surviving Dale Coyne Honda entry.

Also of note is English rookie Ben Hanley, driving for new team DragonSpeed Racing, who barely put a wheel wrong all day, coming home a respectable 18th place two laps behind the leader. Another Swedish driver left to wonder what might have been was Marcus Ericsson. The Formula One refugee was running strongly before suffering mechanical issues in his Arrow Schmidt Peterson Honda.

Honda struggles
Not a good day out for Honda runners. Sebastien Bourdais, the defending St Pete winner, had an early shower after a part of his engine expired, leaving him to park down near the turn ten complex after 11 laps. Then Ryan Hunter-Reay’s Andretti Autosport Honda went up in a cloud of smoke on lap 19. Throw in Marcus Ericsson’s punctured radiator, which put an end to a strong debut, and it wasn’t a good day for the Honda runners. Safe to say twin engine issues will have the folks at Honda Performance Development working overtime before the next race.

Off to Austin
The IndyCar Series makes its debut at the Circuit of the Americas (COTA) outside of Austin, Texas, in two weeks. The track hosts the United States Formula One Grand Prix, and its fast, flowing layout will be completely different to the street fight we saw at St Pete.