Straight lines the Waratahs’ blueprint to simple but effective attack

Waratahs coach Daryl Gibson created headlines and discussion last week for doing something he did briefly last year and then forgot about or just ignored: he named Israel Folau on the right wing for the Waratahs return to the SCG against the Queensland Reds.

As was the case when he did the same thing for a month last year, Folau being shuffled out to the wing was forced by the form of other players. Last year it was the impact from fullback that Bryce Hegarty was providing; this year it’s the irresistible balance that Karmichael Hunt brings to the Waratahs backline at inside centre.

Hunt’s combination with Adam Ashley-Cooper has perhaps been the most surprising subplot among all the various Australian conference subplots.

There was certainly a train of thought during the preseason that it could work as a combination, but I’m not sure anyone subscribing to this theory thought it would work quite as well as it has.

And it has worked very well – so well that Kurtley Beale couldn’t walk back in the No. 12 jersey he wore all last year, meaning he was pushed back to fullback, with the flow-on being that Folau was named on the right wing, something that has become so dumbfoundingly obvious over the last 18 months or so yet still has an infuriating air of novelty about it when it happens.

The argument that Folau is the best fullback in Australia is now paper-thin.

If the form of Dane Haylett-Petty this season and in last year’s internationals – where he started at 15 for a bunch of Tests before Michael Cheika developed the same sort of amnesia that plagued Gibson – as well as a decent highlight reel from Tom Banks in 2019 already doesn’t further erode the case, then being the first player moved out of position at the Waratahs to accommodate another player’s positional move surely does.

And if that’s still not enough to convince you of the obvious benefits of Folau’s permanent presence on the right edge, then let’s just go back to the 23rd minute of Saturday night at the Grand Old Girl.

The Waratahs, leading 13-0, have reduced the Reds to 14 men, after prop JP Smith copped a yellow card a few minutes earlier, and from which backrower Ned Hanigan scored under the posts after a bruising out-in line to bump through a couple of defenders.

The Tahs take a scrum just inside their half and in the centre of the field, forcing Queensland to shuffle forward and get young loosehead Harry Hoopert onto the field. Jake Gordon feeds the scrum, the Waratahs win it well, and Gordon picks up and goes to the right, already with the jump on his opposite number Moses Sorovi, who lagged back at the scrum. 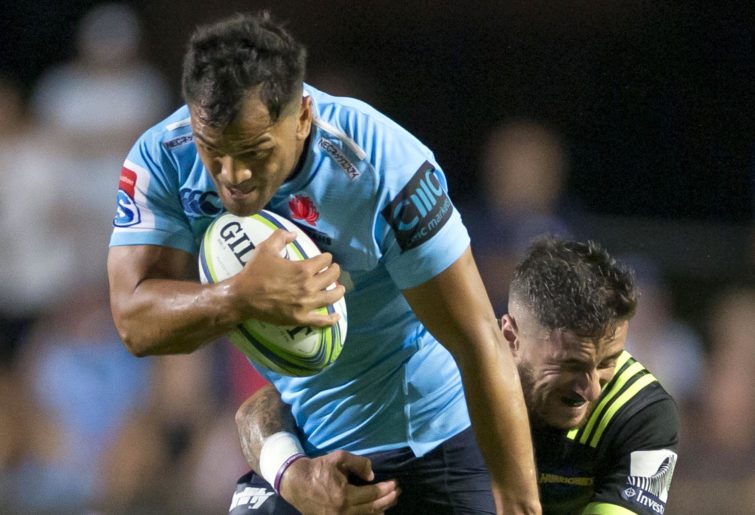 Gordon beating Sorovi means the Waratahs have already created a three-on-two. Beale holds a straight line at Reds inside centre Duncan Paia’aua, while Gordon is eyeing off flyhalf Hegarty, now a Queenslander.

Gordon passes just as he gets to halfway, but it’s not to Beale, it’s to Hunt, who had by now switched to an outside line looping around the back. The speed with which Paia’aua came up on Beale meant that Hunt was already three, maybe four metres outside him and clear in the instant the ball reached him.

Hunt is still comfortably 20 metres in from touch, but Reds left winger Sefanaia Naivalu a similar distance away from him is already back-pedalling.

But from what? Hunt is the last player in the frame for NSW at that point.

Hunt straightens, Naivalu must come forward again to engage Hunt, and the ominous figure of Folau looms in the outside channel still in at least 15 metres of clear air as Hunt gets the ball to him. For viewers at home he’s literally come from nowhere.

It’s a superbly well-worked move from NSW; Beale’s straight decoy line is crucial in keeping Paia’aua focussed on the inside and the danger as Hunt gets around his outside with Folau lurking on that beautiful right-hand edge line that he runs is that the Reds are about to made to look very silly.

As it happens, as Folau edges further right getting ready to load up his right-foot step, young Reds fullback Isaac Lucas brings him down in a copybook legs tackle and suddenly Sorovi and Hegarty are there, as are backrowers Scott Higginbotham and Liam Wright.

Wright brought Folau back to ground after the winger thought he’d been released, and this was enough for referee Glen Jackson to ping Folau for not releasing the ball.

So for all the beauty of the attacking move and the space it created, the Waratahs actually coughed up possession.

But it also spoke volume for the effectiveness of their attack now encouraged by Gibson playing the straight-running Hunt and Ashley-Cooper in the centres, and with Folau back to his simplified best in the right flank.

This moment brought a rather exasperated “see?” in my lounge room because I’ve grown sick and tired of the need to rediscover Folau’s danger by removing the complexity in his game. I’m sure you guys are similarly sick of reading it, just as we’re all sick of agreeing with each other.

In truth Beale isn’t a great fullback either, but his kicking game and his playmaking make him a dangerous prospect from the back. And it’s certainly true that all of this has fallen into place for NSW with Hunt’s need to get away from Queensland and Hegarty’s desire for a starting role.

It’s going to be this kind of simplicity that makes the Waratahs a play-offs contender in 2019, I’m quite sure of it. It’s one thing to know Ashley-Cooper and Folau are coming at you down that right edge, but another thing altogether to stop them.

Hunt by season’s end could well be a buy of the year contender, and he’s on equal footing with Quade Cooper in a Rebels jersey from mine, after one month of the season.

And it’s all because he plays a simple, straight game that forces players to run those same lines in support.