Why the Wallabies should be on the midfield K-trail

A square peg won’t go into a round hole – it is one of the axioms of life. In rugby terms, that means trying to get the right fit for every position on the field, which has been a besetting issue for the Wallabies under Michael Cheika.

After watching the weekend derby between the Waratahs and the Reds at the Sydney Cricket Ground, I was also left wondering whether games naturally played on rectangular fields will ever truly fit oval grounds.

I can still recall the strangeness of the Gabba in the first Test between Australia and the British and Irish Lions back in 2001. The Gabba is rightly considered a superb venue for cricket matches, but for rugby there was simply too much distance between the spectator and the action.

At the Principality Stadium in Cardiff, there is a cantilevered overhang which slingshots you right on top of the play, and you feel you are part of it – able to cheer and hiss at the players as you see fit.

At the Gabba, even in the prime seats, you viewed the action at ground level, and swathes of outfield separated the spectator from the combatants. Bits of garden furniture were dotted about everywhere as makeshift replacement benches for the subs, as the eye was drawn unwillingly away from the rugby posts and towards the beautifully manicured square of cricket pitches. It appeared that they were roped off and reserved for a far more important sporting occasion!

At the SCG on Saturday, the match also suffered from a playing surface wholly unsuited for heavy-duty chores of scrummaging and rucking, with the grass top breaking up into little mountains of sand and soil after every set-piece. It all looked and felt very odd.

The only natural rugby oval I have ever experienced remains Manly Oval, which is altogether more compact and smaller in scale.

In the course of 2018, no fewer than six different combinations at 10, 12 and 13 were tried out in the course of the Wallabies’ 13 games. There were experiments with four different outside-halves, three inside centres and three number 13s.

Partly due to misfortune with injury and unavailability, nobody stuck the landing and established themselves as an automatic pick. We are no wiser to the premier choices in those positions and their best back-ups with the 2019 World Cup coming around the corner.

There is little doubt that, with everyone fit and ready to go, Cheika will still view the trio of Bernard Foley, Kurtley Beale and either Samu Kerevi or Tevita Kuridrani as his first-choice midfield – unless Scott Johnson and Michael O’Connor can persuade him otherwise.

The sight of man-of-the-match Hadleigh Parkes’ face after the game against Scotland told you everything you needed to know about the professional requirements for the number 12 position. His head was swathed in surgical white tape, one eye bulged and was turning blue, while spots of scarlet blood dripped down the other side of his face. 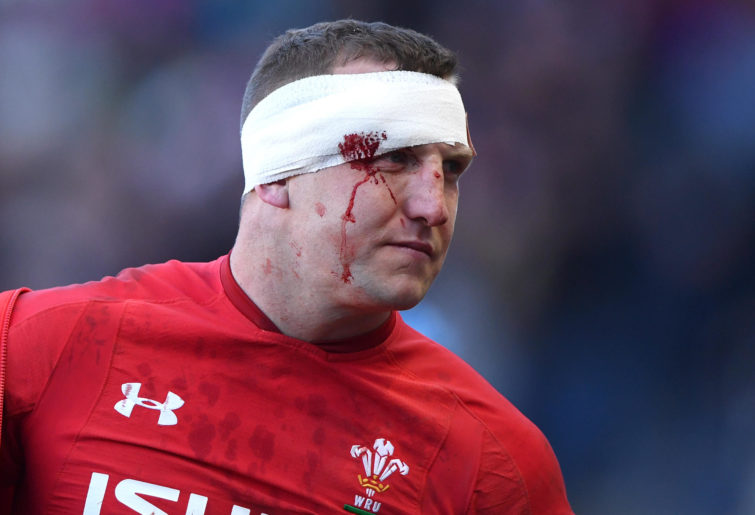 He had been battered, and it was an unforgettable visual reminder of the physical punishment an inside centre in the modern game has to absorb.

An appetite for contact is non-negotiable, and perhaps not for the first time, Gibson looks to be ahead of the curve in his thinking. The number 12 is usually the first back called upon to tackle a large forward rolling around the corner of the rucks on a wave of same-way power:

Duncan Paia’aua cannot handle Ned Hanigan in the frontal tackle on the second phase from the lineout, and a try is the straightforward result.

For the ‘Tahs with Hunt at 12 and Beale at 15, there is no need for the complex ‘musical chairs’ patterns Nathan Grey employs for the Wallabies:

Everyone is defending in their natural position in the backline. Foley has the confidence to make a solid tackle in the 10 channel, Hunt jackals over the top of him and delays release for a full five seconds, and that hands the advantage to the defence on the next phase.

Although Sefa Naivalu scored a try after a speculative kick a few seconds later, that was not the fault of either Foley or Hunt, who played their parts well enough.

Hunt was able to fulfil this role successfully throughout the game:

In both these examples, it is Hunt’s on-ball work which forces extra support players to commit and delays the release of the ball. That gives the Waratahs defence time to regroup and develop line-speed for the next phase: 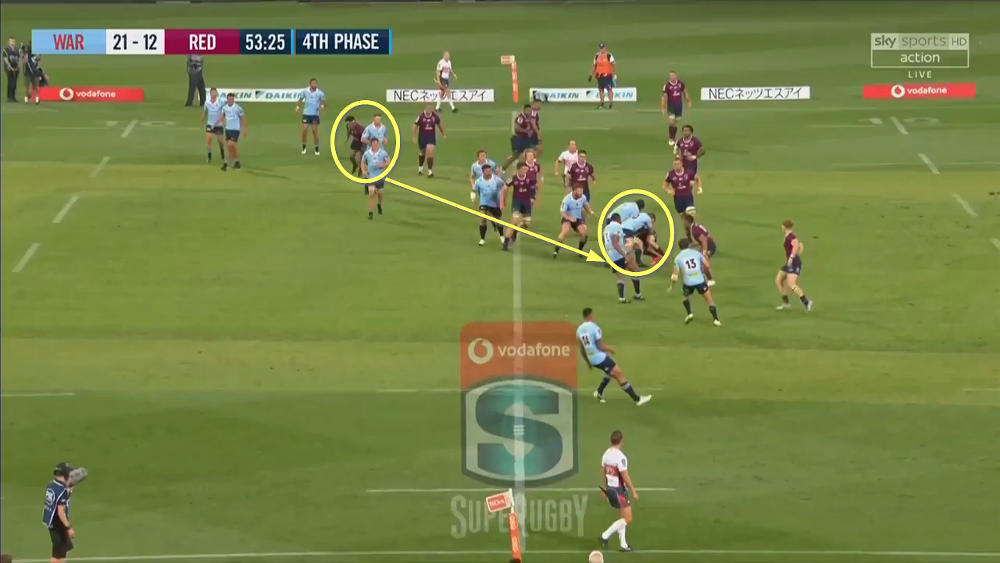 The five-second slowdown at the ruck has allowed the NSW defence to make the next tackle ten metres further upfield.

Hunt got a visible reward for his unseen work in the 48th minute:

Firstly, he stops a big forward (prop JP Smith) in his tracks, then he folds over the ball and three Reds’ players are unable to remove him in time to prevent a turnover.

The unselfishness of the modern number 12’s work in contact was highlighted by another turnover Hunt created for his captain Michael Hooper less than one minute earlier:

Hunt makes a tackle on another big man, Samu Kerevi, Hooper eagerly takes his shot at the turnover on the deck, and Tahs are away on a turnover counter down the left.

Although he was playing nominally at outside centre for the Reds in this game, Kerevi also showed the same appetite for contact situations as Hunt – but this time on the offensive side of the ball.

When scoring his try in 27th minute (at 0:50 on the previous highlight reel), he ran all the way from second receiver to the back of the ruck to make the scoring play: 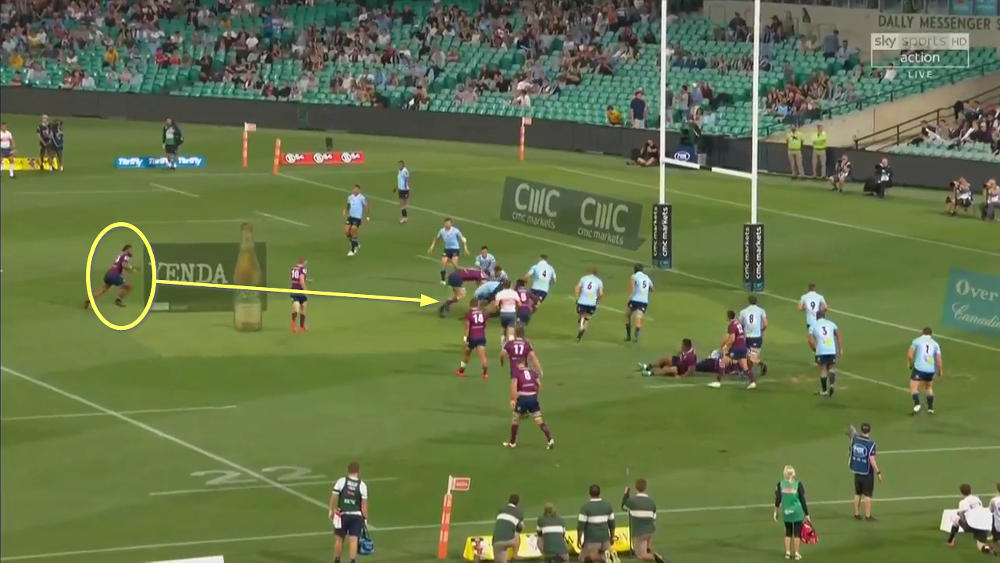 If Kerevi’s power is his most obvious asset, he is also developing nice touch and nuance on his short passes off the back of that power. It was he who drew the defender and released Smith for the loosehead’s bullocking run prior to the Hunt turnover.

At first receiver, he pulled both Hooper and Hanigan on to him before switching the ball neatly into his left hand and putting Scott Higginbotham through the hole:

Summary
Hadleigh Parkes’ face after the Scotland match said it all. Battered, bruised and bloodied, it looked like he saw the humour of the situation and found the man-of-the-match award vaguely ironic.

That face eloquently told the story of just how physical the inside centre (or second five-eighth) position has become at the elite end of the professional game.

On the day, Parkes was one of the cornerstones of a niggardly Welsh defence which has conceded an average of only 1.5 tries, and fewer than 14 points per game, in the current Six Nations.

It has become very difficult to succeed without the appetite for contact and sheer volume of physical work required in that position. For all his many and varied positive qualities, it may be time for Michael Cheika to follow Daryl Gibson in acknowledging number 12 does not suit Kurtley Beale nearly as well as fullback.

Both Karmichael Hunt and Samu Kerevi fit the bill much better in that respect, and both provided shafts of light in the gloom of a largely scrappy affair at the SCG on Saturday evening. The presence of either would immediately enable Cheika to abandon the musical chairs format in backline defence prompted by the combined midfield presence of Foley and Beale.

Hunt showed he provides real value in the largely unseen work around the tackle area, and we already know that he can run, pass and kick with ball in hand. He would also provide considerable extra leadership in the backline. 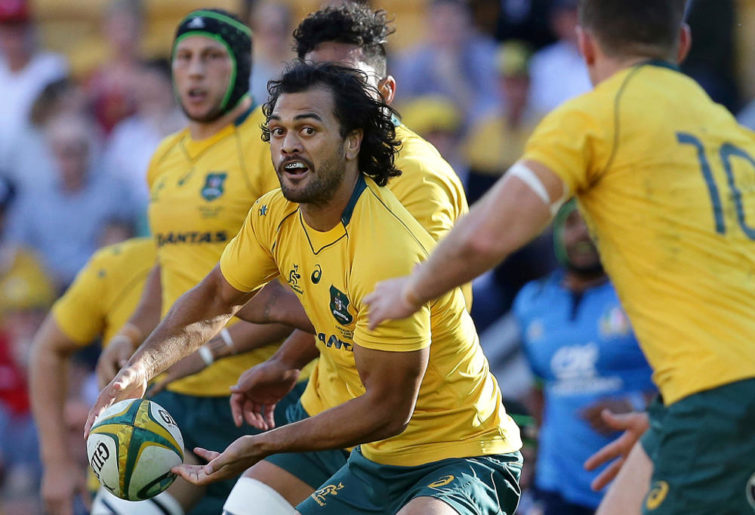 Meanwhile, Samu Kerevi continues to interpret the outside centre position as you would expect of a natural number 12. He runs hard angles, he has the ability to survive and thrive in contact, and he has added a shrewd short passing game to his offensive arsenal.

If he can prove to be as able a defender as he is on attack, the form midfield in Australia would undoubtedly feature Quade Cooper at 10, Karmichael Hunt at 12 and Kerevi at 13. The physicality and directness of the latter two would complement the artistry of Cooper at 10, and that would, in turn, leave Cheika with the potentially tricky problem of where he could fit Kurtley Beale into the back three.

But at least that would be a case of inserting a round peg into a round hole, and less disruptive than the system he has right now. It would also give him the shape of a backline which might succeed at the World Cup in Japan later in the year.

This kaleidoscope of squares, oblongs and ovals is giving all the supporters of Australian rugby (and even some of the outliers) a real headache.