Who’s to blame for the Lakers’ most disappointing season in franchise history?

The Los Angeles Lakers 2018-19 season may well be remembered as the worst in the franchise’s long history.

The team will win at least 31 games, so the franchise will have finished a number of seasons with much poorer win/loss records. However, this has been the most ‘disappointing’ year, given the team’s performance despite the presence of LeBron James; arguably the greatest player of all time.

Even if you want to engage in the increasingly tiresome GOAT debate by stating that it is definitively not LeBron, that’s you’re prerogative and your opinion. What’s not up for debate is that LeBron is in ‘that conversation’, and remains many people’s number one.

We can debate where he sits in those arbitrary GOAT rankings, but we can’t debate that he’s in them. In short, he’s great.

That greatness rightfully brings high expectations. So when the Lakers ‘won’ the off-season by signing LeBron, it immediately brought with it the pressure to win games.

Unfortunately, the very minute after LeBron put pen to paper, the Lakers did just about everything wrong. Signing LeBron should assure you a playoff spot, but the Lakers will be absent from the playoffs, in what’s been a disaster of a season.

Which raises the obvious question of who is to blame?

Magic Johnson and Rob Pelinka – the Lakers President of Basketball Operations and General Manager, respectively – have the most blood on their hands. They will keep their jobs but it’s debatable whether they should.

After signing LeBron, the front office duo then assembled a roster around him that was downright bizarre. In fact, “bizarre” is a little generous. The signings made after LeBron were just plain dumb.

Anyone who has watched LeBron play basketball would know the recipe for success becomes relatively straight forward. The strategy is simple: surround LeBron with shooters and space the floor. If said shooters are also quality defenders, then you can almost guarantee yourself a deep playoff run.

If you don’t already have those types of players in your squad, executing the ‘LeBron strategy’ is reliant upon having cap and roster space, suitable free agents being available, or having trade assets. The Lakers had all three of these factors in their favour, yet somehow completely botched it.

Instead of surrounding LeBron with shooters, the Lakers instead opted for additional playmakers, who lacked perimeter shooting. To say that was a mistake – which almost everyone who follows basketball recognised straight away – is a massive understatement.

The mistake was crystallised by one decision in particular: not re-signing Brooke Lopez.

If the Lakers had simply kept Lopez, and made no other moves, they probably would have made the playoffs. He would have provided the Lakers with 3-point shooting and rim protection. Two massive boxes ticked in one signing, and for less than $4 million; seeming as Lopez ended up moving to Milwaukee for just $3.4 million.

That single Lopez decision alone is almost enough to fire Magic and Pelinka. It defies belief they would let the perfect centre for LeBron walk out the door. Not only are his skills the perfect complement to LeBron, but Lopez wanted to stay, the coaching staff desperately wanted to retain him, and he was relatively cheap.

It was a shocking decision at the time, let alone in hindsight, given the sterling season Lopez has had for the Bucks.

Sadly, Magic and Pelinka compounded that error by signing a host of other players that were a poor fit alongside LeBron. Non-shooters Rajon Rondo, Lance Stephenson and JaVale McGee were given a combined $15.9 million. 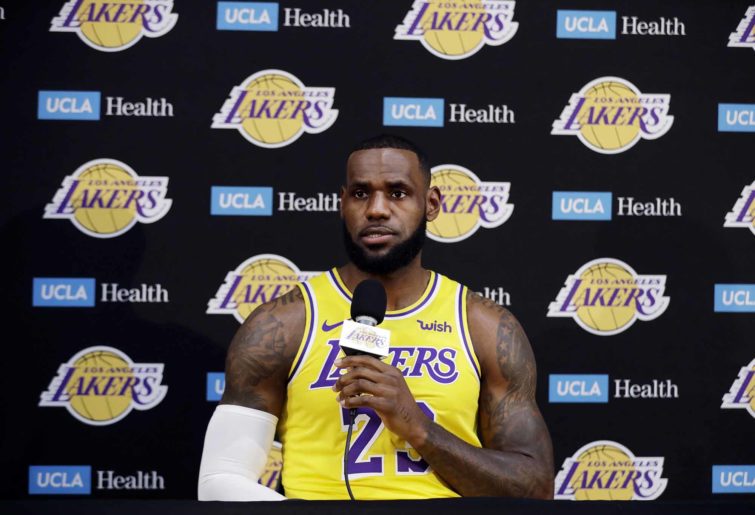 Though they were all one-year deals, providing the Lakers with financial flexibility, they were still the wrong type of players to slot alongside LeBron.

Many people proclaim that LeBron would have got the teammates he wanted, so he should cop the flak for those players being signed, but there’s no concrete evidence of that. Even if true, then Magic and Pelinka should still get fired for being pushovers, and/or not recognising that it would be a grave mistake.

Yet while Magic and Pelinka should shoulder the majority of the blame, hardly anyone in the organisation should be spared criticism.

First of all, owner Jeanie Buss hired the front office decision-makers, so all blame for their mistakes ultimately rests with her. Their errors are her errors.

Coach Luke Walton is not without blame either. Say what you will about the disjointed roster, but Walton’s rotations were still very confusing at times. Yes, he had to deal with suspensions and injuries, but some of the line-ups he put on the court – for long stretches – were baffling.

Additionally, Walton simply could not get the team to commit to any sort of defensive scheme or intensity. The Lakers were abysmal on the defensive end, and much of the issue is that they simply didn’t try. When there is no defensive effort, the coach is a dead man walking. If you can’t get your team to try, it’s usually a sign you’ve ‘lost’ the team.

It’s also worth noting that Magic and Pelinka didn’t hire Walton; he’s not “their guy”, which makes his seat hotter than everyone else’s.

Having said that, the team’s best player – not the coach – sets the tone defensively, and in that aspect, LeBron was poor this season. The plethora of memes you can find tell you everything you need to know about his defensive leadership at the Lakers.

Whether it’s him slowing down in year 16 or an actual bad attitude is still a mystery. Only LeBron knows that for sure, but either way, it was a bad look and cascaded down to the other players.

However, I maintain that the coach needs to address that in some way, shape or form. LeBron should have been called out – publicly, privately or both – for his D.

Calling out LeBron might not be great for your job security, but having a team not play defence is worse for it. If you’re going to get fired anyway, it may as well be for asking more from your superstar. At least you’ll be respected, and be well positioned for your next job.

Yet when it comes to the defensive effort by the team, they should all hang their heads in shame. They’re professional athletes, for goodness sake. Show some damn heart.

So, as ever in a season this disappointing, there is plenty of blame to go around, and hardly anyone in the organisation should be spared criticism. It will undoubtedly cost some people their job, while others will extremely lucky to escape without the same fortune.

I believe Magic and Pelinka are exceedingly more culpable than anyone else and should be put on notice. Their failure to assemble a quality roster is the root cause of all the Lakers’ issues this season.

A repeat of last off-season’s pathetically stupid moves should see them removed from their positions because wasting another year of LeBron James’ career is tantamount to being professionally negligent.