The players to watch at the 2019 NFL Draft

The National Football League Draft  is an annual event that provides a forum for player selection and recruitment.

Teams are listed in reverse order based on their position in the league during the previous season. Then each team can select a player or trade their position with another team.

The essence of this arrangement is to allow the weakest team to select the best players available.

The 2019 NFL Draft is the 84th edition of the event and it takes place from April 25 to 27 in Nashville, Tennessee.

With the NFL Scouting Combine revealing some amazing talent among college players in February, the draft will be a great event with exciting selections and trade-offs.

Here are some of the top picks expected at the 2019 NFL Draft.

He displayed superb playmaking and athletic skills at the scouting combine held in Indianapolis. Pundits believe that the Cardinals will have to choose between Kyler Murray and Nick Bosa, the edge rusher from Ohio State.

Although they choose to get one through free agency, picking Nick Bosa would be a good choice, considering the fact that he is regarded as the best player in this draft.

For the San Francisco 49ers, he is a much better player than Josh Allen or Quinnen Williams.

3. New York Jets: Josh Allen (OLB)
The Jets urgently need an edge rusher so Josh Allen will be a great pick. He will be a better match with the team than the other players like Murray and Bosa.

Allen is a fast runner and will be able to attack the quarterback and can drop back during pass coverage.

4. Oakland Raiders: Quinnen Williams (DT)
After the Raiders traded Khalil Mack, they have been in need of an edge rusher. But Jon Gruden believes that getting a new inside pass rusher is equally important, so Quinnen Williams could be a great boost to the team’s defensive line.

This does not mean Gruden may not be more interested in Murray and trade their position with the Arizona Cardinals.

5. Tampa Bay Buccaneers: Rashan Gary (DE)
The Buccaneers would get the needed pass-rush help from Gary although they could be tempted by different cornerbacks available in this draft.

They can’t overlook Gary. He is a capable defensive lineman. On the other hand, the Buccaneers may settle for Devin White, the linebacker from LSU.

Dave Gettleman, the General Manager of the Giants, spoke about using Kansas City’s model at the quarterback position. He suggested that they allow Eli Manning to serve as a bridge quarterback with a rookie.

If this is the case, the team may go for Dwayne Haskins, the high-upside passer. 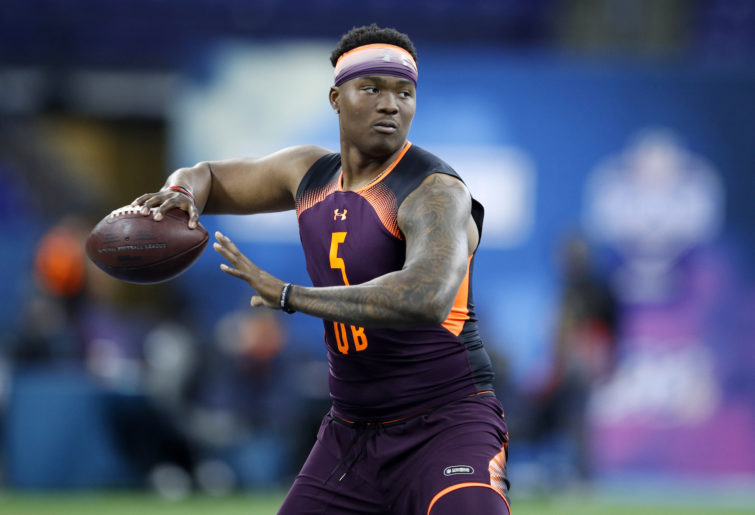 7. Jacksonville Jaguars: Jonah Williams (OT)
The team management may decide to get Haskins ahead of the Giants. If they choose to sign on Nick Foles, they may just need to work on enhancing the offensive line.

This could mean that Jonah Williams will be chosen instead of Jawaan Taylor because Williams is a more physical blocker than Taylor.

8. Detroit Lions: Montez Sweat (DE)
Montez Sweat has an impressive blend of size and athletic skills. With the exit of Ziggy Ansah from the Lions, they need to care of their pass rush.

Sweat performed excellently at the scouting combine and the Senior Bowl so he should be a perfect fit in Matt Patricia’s defence.

9. Buffalo Bills: DK Metcalf (WR)
Metcalf was a delight to watch at Indianapolis. He has a superhero’s body and amazing testing numbers.

The Buffalo Bills will appreciate his talent if he plays the role of a playmaker. His fast pace and capacity to go and high-point the ball make him a perfect fit for the team.

10. Denver Broncos: Drew Lock (QB)
Joe Flacco may leave the Broncos and the club executive John Elway will use this draft to pick a replacement for the quarterback position. Drew Lock had the best throws at the combine.

Those are the top picks for the 2019 NFL Draft. Most of these mock draft selections are based on the off-season needs of teams and the performance of players at the recent scouting combine.