From 2007 to 2013, from the end of the Neale Daniher era to the end of Mark Neeld, Melbourne finished 15th on the ladder on average – and a large part of this period of time was in a 16-team competition.

Out of the darkness came light in the form of Paul Roos, with Peter Jackson in the background pulling the strings, and steady progress has followed ever since.

Roos doubled the Demons win tally from two to four in 2014. Modest beginnings, certainly, but progress. Seven wins followed in 2015 and 10 in 2016 with a percentage of almost 100. Platform built, Roos handed the senior coaching reins over to Simon Goodwin.

In his debut campaign, Goodwin increased the wins to 12 and a ninth-placed finish, but the Dees choked in the last round to forego a finals berth. Starting Round 23 inside the eight a game and percentage clear of ninth, they conspired to somehow miss the September action. Only Melbourne.

2018 saw only two more wins in the home-and-away rounds, but the third best per centage in the competition. They became the highest scoring team in the league, and won two finals on the way to a prelim.

From long-term laughing stock to premiership contender. The Demons have officially arrived.

While Melbourne were the highest scoring team in 2018 and the only club to average more than 100 points per game, they did concede the most points of any finalist, ranking ninth overall.

While defensive leaking can be a byproduct of high scoring, leaving yourself open the other way when hellbent on attacking, it is clear that the Demons hierarchy has felt this has been a personnel issue for some time.

Key position defender Steven May was acquired in the trade period, following Jake Lever the year before and Michael Hibberd before that.

With Lever out for four months, we won’t get a look at Melbourne’s preferred backline until much later in the season, but May’s strength, Lever’s intercept marking, and Oscar McDonald’s lockdown capacity gives three tall options that complement each other and can handle imposing tall forwards from likely challengers West Coast, Adelaide and Richmond.

Having the speedy Sam Frost as back-up defensive tall is also a good place to be, as he would command a game in many sides. Neville Jetta is one of the better back pockets when it comes to keeping opposition smalls quiet too.

From a rebounding perspective, Melbourne is also well placed. Michael Hibberd is good in the air and much more effective when driving the ball long rather than looking for cheaper short options.

Christian Salem is the best user down back, and getting the ball is his hands is always a priority. If he can start getting Rory Laird/Jake Lloyd numbers, he’ll help his team go to the next level.

Jordan Lewis is often the general directing traffic down back, but at what cost given he can be a defensive liability?

Bayley Fritsch can also push back as a defensive winger; he looked completely at home as an AFL footballer in his debut season, but was unconscionably dropped from the preliminary final team.

Kade Kolodjashnij has been brought in to try and resurrect his career in this area, and if Jayden Hunt can find his confidence and best form then he adds excitement and dash behind the ball – an area still lacking for this side. But Melbourne places a premium on good ball use, so he needs to prove he has that club in his bag.

Max Gawn gives the Demons a head start in the midfield as one of the undisputed top two ruckmen in the game. His palmwork is the best in the business, but his marking power adds enormous value and his link play is underrated. His influence could be enhanced with the implementation of 6-6-6.

Clayton Oliver continues to get better, and deserves his place in the upper echelon of midfielders in the comp.

Angus Brayshaw is coming off a third-place finish in the Brownlow after finally getting an uninterrupted run – there is no obvious weakness in his game apart from a slight knock on his execution from time to time, but he can win the ball inside, find it on the out, kick goals, and tackles hard and often.

When looking to go from good to great, you need players to elevate above their perceived station, and James Harmes is one who did this in the back half of 2018 for the Dees.

His improvement reminds one of someone like Kane Lambert who went from rookie lister to All Australian contender. Harmes is on that path.

Jack Viney was the great midfield hope for Melbourne fans when he was drafted in 2012, while Nathan Jones shouldered the midfield load to the point of exhaustion for many years.

Their club has gone beyond relying too heavily on individuals, but Viney was inspirational in the finals while Jones wasn’t much of a factor.

Last year at the Dees, most felt Jordan Lewis and Bernie Vince were coming to the end of the line and both couldn’t play in the same team. Lewis prevailed, but it is probably not a question yet between he and Jones.

Melbourne could still do with some more outside run and class, so that is the Achilles heel other teams will look to expose. It’s very difficult to beat the Demons at the contest given the toughness they have around the ball.

The forward-line will look different this year with Jesse Hogan offloaded to Fremantle as part of bringing May in to shore up the defence.

Tom McDonald was a revelation last season, finishing with 53 goals. It’s rare the key defender that can make that transition with such aplomb, and his set shot kicking was a feature. It’s a remarkable story.

Sam Weideman was a surprise packet against Geelong in the elimination final, almost arguably best on ground in a match that featured some of the best players in the competition. He has always looked good in the air and been quietly held in high regard within the club, but has only played 20 games in three years.

Tall forwards take time to develop, yes, but Jack Riewoldt won a Coleman medal in his fourth season at the same age Weideman is now and they share some similar traits. Having shown he’s got the right stuff in the finals, he will be relied upon to deliver consistently in support of McDonald.

Joel Smith has been playing as a third tall in the JLT series, after fulfilling a similar role in defence previously in his career. It’s always handy to have a swingman to call on, and playing both areas of the ground will help develop his footy smarts.

Jake Melksham took his football to another level, using his pace, sure hands and penetrating kicking to great effect. He suits the Melbourne game style perfectly.

Alex Neal-Bullen had a career-best season as a defensive forward, and has cemented a spot in the side. Mitch Hannan provides another hard-running marking option that can push up onto a wing.

Aaron Vandenberg’s body is made of biscuits and tissue paper, but he provides immense value when up and running as another pure footballer. Does Hunt play forward perhaps? It hasn’t worked when tried in the past.

Christian Petracca hasn’t lived up to expectation of such a high draft pick, and more is always expected and anticipated, but he is now reaching the stage where he may just be what he is.

He’s never going to have the tank to be a full-time midfielder, and Melbourne don’t need him to be anyway. He’s a medium forward that is good one-on-one, has a thumping kick, can take a grab and create something from a stoppage every now and then. 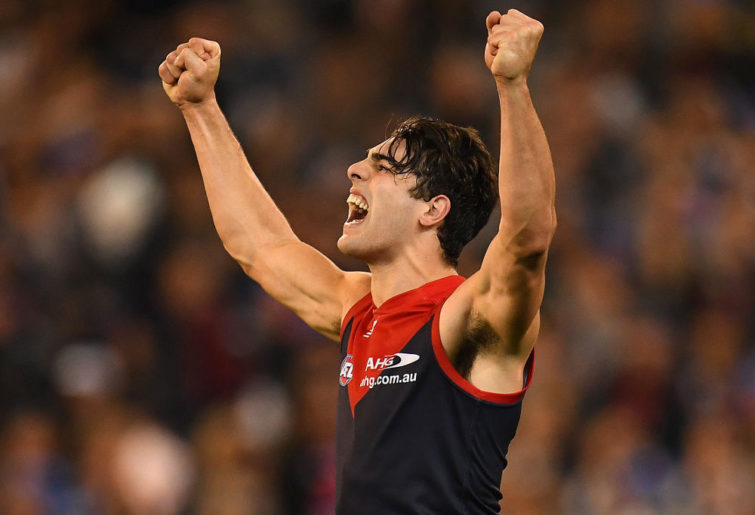 Melbourne’s best football in 2018 was the equal of any other side, and perhaps even superior. Their three-week run from Rounds 8-10, when they scored 146, 159 and 146 and recorded winning margins of 69, 109 and 91, was exhilarating. The last of those, against Adelaide, was a thing of beauty.

The Dees have a good chance to record a 4-1 or 5-0 start to the season, which can set them up for a tilt at the flag.

Port, Essendon and St Kilda at the MCG will hold no fears. Trips to the SCG and Kardinia Park shape as stiffer tests, but the Swans may well be on the slide and Melbourne dominated Geelong down at the Cattery last year only to choke in the last quarter.

They are a more mature side now, and rid themselves of the Cats bogey in the finals – they haven’t beaten Sydney since 2010 so have to get that monkey off their backs.

The Demons will beat up on teams in the bottom ten due to their contested ball strength, and again have a high percentage.

Those skills will enable them to at minimum break-even against the better teams and control games from their front half of the ground. A stiffer defence will also hold them in good stead.

Melbourne’s progression has been on an upward trend for a number of years now. And they’re not done yet.