NRL team of the week: Round 1

Well, after a tumultuous season and what feels like years of waiting, footy is back. Round 1 of the 2019 NRL season is truly in the books and there were a lot of stories to dissect.

Parramatta kicked off their resuscitation effort after a poor 2018 with an away victory over early Premiership favourites Penrith, the champion Roosters couldn’t get off the a winning start at the SCG at the hands of the old enemy, the post-JT era in Townsville got underway in style and, well, the Storm did what they always do.

There were standout debutants, foreign imports producing the goods and old faces returning to the party in spades. To level them out, here’s my first Team of the Week for 2019.

Alright, let’s get into it.

Captaining a team that won 40-6 on opening weekend with a debutant half (more on him later…).

Round 1 couldn’t have gone much better for RTS, who kicked off the defence of his Dally M Medal in style.

The Broncos may well have been subdued in Melbourne on opening night but there were positives for Anthony Siebold to take out of the game, and a big one was the continuation of Corey Oates’ stunning late-season form from 2018.

Two great tries to get the Broncos back into a game they were slipping out of and a constant menace bringing the ball out of his own end.

Oates is a freak and looks ready to win his Maroons jersey back once and for all.

Parramatta nailed maybe the most unlikely result of the weekend by winning in Penrith after a dismal 2018.

Key in that win was two-try man Michael Jennings, who has a lot of responsibility on his shoulders to be a leader in a young side this year. He’s started well enough. 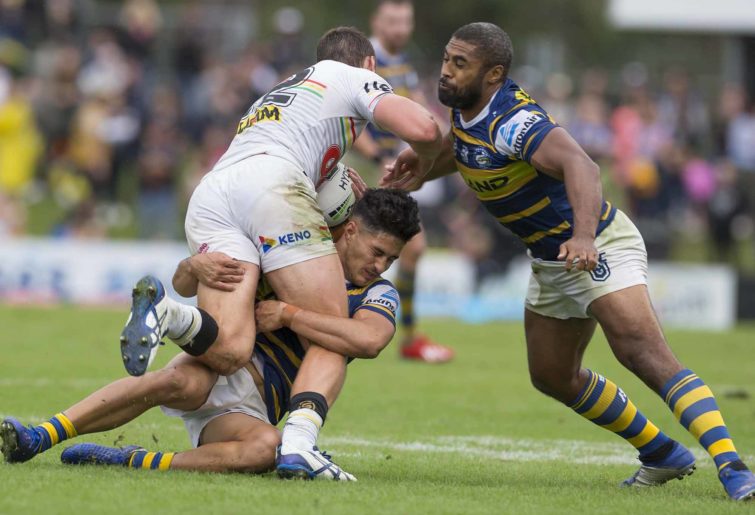 After a rough couple of years, including losing his place in the side last term, seeing Justin O’Neill making the kinds of defensive plays that saw him earn a State of Origin call-up was refreshing.

A deserved try late on capped a great individual display and the Cowboys will desperately hope he is on the way back to recovering his 2015 form.

It’s easy to look at the performance of Nene Macdonald, whose spot Ravalawa now occupies in the St George team, and call it a day.

But on a losing team, Mikaele proved how much of a handful he is going to be for defences up and down the ladder this year.

He made errors, as young players will do, but ten tackle busts and 150 metres do a lot of talking.

Welcome to the NRL, young man. Eyes were on two junior halves in the opening salvos, this guy and Dylan Brown at Parramatta. While Brown certainly did himself proud, Keighran looked at home in top grade from the word go.

Not content to let Blake Green do all the work and sit tight, Keighran clocked up a try and two line breaks to go with 200 kick metres of his own and looked completely assured.

He and the Warriors will face bigger tests than the Bulldogs gave them, but there’s a lot of promise here.

It was a true battle not to include Michael Morgan after fully announcing himself as the captain of the post-JT Cowboys, but Reynolds’ performance against the champion Roosters was on another planet.

Three try assists and a short kicking game that any NRL halfback would give their right foot for were key cogs in a stunning win for the Bunnies, and Reynolds cemented his reputation as a big-game player of the highest order.

No-one came into a new side with more expectation on their shoulders than the big man, and Klemmer delivered in style for Newcastle.

He did exactly the job he was brought in to do – take big carries, get in people’s faces and get the Knights on the front foot.

To do it against a pack as big and nasty as the Sharks’ deserves some serious golf claps. Over 200 metres and 33 tackles to go with three offloads – that’s a proper workhorse performance.

The reigning premiers may have never really got going at the SCG, but none of that was down to a lack of effort from their co-captain.

As well as nabbing a crucial try, Friend racked up a stunning 68 tackles as well as a line break and chipped in with his kicking game out of the ruck to perfection.

A true captain’s knock, even in defeat.

Another one to show serious grit in defeat. Another try-scorer, but that wasn’t what made this performance impressive.

Tamou clocked 56 tackles and 130 metres in a 56-minute performance – now that’s what you call, being everywhere on the park.

The man may not be a representative force any more, but he is still set for a big year as the de facto leader of the Panthers pack.

So much was made in the preseason of the move by Wayne Bennett to put Slammin’ Sam on an edge to accommodate Cam Murray. Safe to say, it worked (see below…).

It already looks a masterstroke from Wayne Bennett to get Sam running at slightly more exposed edge defenders where his typical 110 per cent style can pay dividends. Angus who?

I know he was wearing 13, but he played part of the game on the edge and I couldn’t not put him in. The man is a freak.

As well as showing hands and footwork that no man of his size should possibly be capable of, Taumalolo put in a massive workload against the Dragons, racking up seven tackle breaks to go with his 285 metres.

A monstrous effort to go with some serious skill means that the Cowboys’ decision to tie him down to a 10-year deal is looking a better call by the day.

One of last season’s breakout stars is here to stay this year. With all eyes on him at the SCG after the much-publicised move to accommodate him in the side, Murray did not let Wayne down.

A typically dogged performance that sums up what Cam can offer the Bunnies in the middle and exactly why he’s displaced one of the Rabbitohs’ biggest recent heroes. A massive season beckons.

An often-underrated player, Asiata was crucial in helping the Cowboys establish control of a game against a Dragons side that were just starting to threaten.

He carries hard and puts the effort in but it is his extra ball-playing ability that really brings an X factor in Townsville.

His work to put Taumalolo through the line in the first half was a joy to watch from a bench forward.

Aloiai came off the bench to really provide some muscle in the middle to help the Tigers stabilise in a to-and-fro game against the Sea Eagles, and boy, did he do that.

21 tackles and 130 metres in his 40-minute stint is a serious effort and the Tigers owe him a massive part of their 20-6 win over Manly that got their season off to the ideal start.

The Storm were their usual clinical selves on opening night in Melbourne, but an unsung hero of their win over the Broncos was the impact big Tui made off the bench.

He perfectly slotted into his role carrying on the early work done by Nelson Asofa-Solomona in subduing a young and fiery Broncos pack and did it superbly. I could hear some of those hits from my couch.

Didn’t play many minutes or particularly destroy the Titans, but young Corey showed in his 25 minutes exactly why Ricky Stuart punted on him ahead of fancied young forwards like Emre Guler.

The red-headed tyro ripped into the Raiders pack with some determination and any man who comes in for his debut and is willing to go fully toe-to-toe with Shannon Boyd is a guy worth watching.

It’s a joy to watch someone with that little fear.