I don’t know about you, but I think 80 minutes of football from each of the 16 clubs in the NRL is more than enough evidence to make some sweeping assessments and adjudications for the entire season.

Sure, some of you may think that one round of footy isn’t a big enough sample size to really judge anything, but if some News Limited ‘journalists’ can comment on rugby league without seemingly even watching the games, I’m pretty sure eight games will suffice here.

In fact, I didn’t even watch all eight games, but let’s not let that get in the way!

1. Brisbane’s season is over
Regular readers won’t be shocked to hear me proclaim that the Broncos won’t be playing finals football; I predicted them to miss out on the top eight last week.

The season opener against Melbourne certainly didn’t give me any reason to pause on that prognostication.

The final scoreline of 22-12 actually flatters Brisbane, who were well off the pace, and scored their tries relatively late and against the run of play.

Losing against the brilliance of the Storm is no embarrassment. Melbourne looked in mid-season form already, with crisp execution, great communication and high IQ football, all on display.

However, Brisbane’s Achilles Heel was on show already: their halves. They could neither apply pressure when Brisbane were in attacking positions, nor get the team out of trouble when they were under pressure.

You simply can’t be a good side in the modern NRL without at least one quality half, and that’s going to be an issue all year for the Broncos. 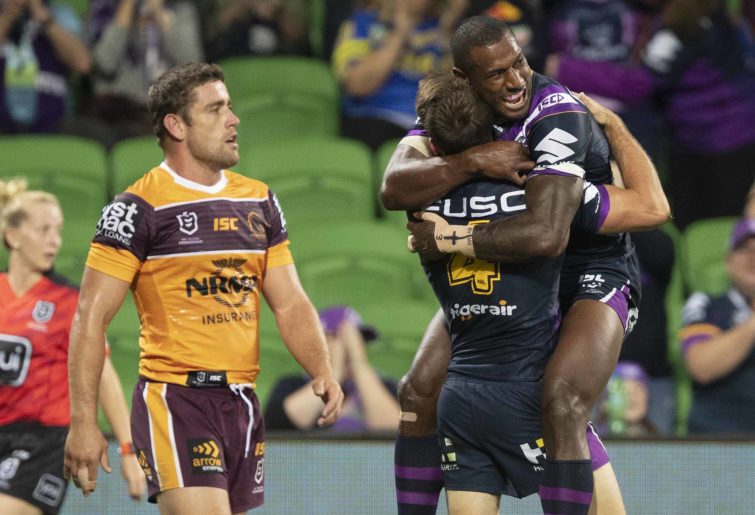 2. Dave Klemmer’s a lock to win the Dally M
Newcastle’s off-season recruit Dave Klemmer had a memorable debut for the Knights. The big fella ran for a whopping 186 metres, had 20 surging carries – almost all of them impactful – and backed up his work in attack by completing 25 tackles in defense.

They say stats can lie, and in this case it’s true, because those impressive numbers still don’t do justice to how well Klemmer played. To say Newcastle would be happy with their big-name signing would be an understatement for the ages.

Such was Klemmer’s dominance, it had me reaching for the record books (well, Googling anyway), to see who was the last prop to win the Dally M Medal in the NRL. The answer? Apart from a hooker, no front-rower has ever won the award.

So given we’re overreacting, is there any hotter hot take that going against history, and suggesting that the weekend’s performance has all but assured us that Dave Klemmer will be the 2019 Dally M medallist? I think not; it’s his to lose.

3. Adam Reynolds will be the NSW Blues halfback
In year’s past, New South Wales fans have been pretty keen to anoint a halfback very early in the season. Come to think of it, so have New South Wales selectors, who have often picked Mitchell Pearce months before the representative series was due to kick-off.

Coming off a series victory last year, the incumbents would be a little unlucky to not be the favourites to hold onto their positions, so Nathan Cleary and James Maloney might be most people’s choices.

However, Adam Reynolds’ kicking game kicking game was brilliant in Souths victory over the Roosters. He showed the value of a halfback whose skillset includes precision and variety in his kicking game; something NSW hasn’t been able to boast about since Joey Johns was around in a Blues jumper.

If not for injuries, Reynolds probably would have played more Origin, and considering he isn’t a liability in defense and discipline, ala Maloney, Reynolds will line-up alongside Cleary in some type of halves pairing for Origin I.

4. Dylan Brown will be an Immortal
On debut, Parramatta teen Dylan Brown exhibited enough potential to have Eels fans giddily excited and optimistic for the season, and opposition fans nervous that Parramatta will be no pushovers in 2019.

Though many fans probably asked ‘Who?’ when Brown was selected to make his first-grade debut in Round 1, Eels coach Brad Arthur was on record saying the half had trained the house down in the pre-season (cliché alert!), and was extremely comfortable giving the youngster a start.

Arthur’s confidence paid off, as Brown’s performance belied his age and experience. He showed a cool head under pressure, and saw Parramatta home over a late-surging Penrith outfit. It was the type of performance that sees over-excited pundits label a player a ‘Future Immortal’.

5. The Bulldogs will finish 17th
As horrified as I was with the Dogs getting pumped 40-6 by the Warriors, I’d like to say I was surprised. However, I wasn’t. I think the Dogs are going to be horrible this season, and they certainly were in game one.

How bad do I think they’ll be? I believe they will defy mathematics, and finish 17th on the ladder. They were B.A.D.