It’s been 173 days since Dom Sheed etched himself into football folklore and secured the West Coast Eagles their fourth AFL premiership. Tonight, we start the whole song and dance once more.

The first round of AFL action kicks off this evening and we’ve assembled a new-look expert panel of tipsters who’ll be looking to predict the future each week. I’ll be heading the panel for 2019, and I’m happy to be joined by new AFL expert Marnie Cohen, editor of the The Roar Daniel Jeffrey, as well as our pick of the crowd pundits; AdelaideDocker.

As always, however, you’ll have an opportunity to have your say. We’ve got a form at the bottom of the piece where you can submit your tips, which doubles as our official AFL tipping competition for season 2019. We’ll also be tallying up who the majority picked for each game, and pitting your tips against the experts. Who knows? Maybe the crowd will come out on top.

Season 2019 begins with the typical season opener between Carlton and Richmond. While these clubs are big enough to ensure the game is always a spectacle, rarely have these been otherwise intriguing affairs and tonight should be no different.

Even if they haven’t copped it in the media, the Tigers let the premiership slip through their fingers last year – far more so than Collingwood did – and will be hellbent on redeeming themselves this year.

They should make light work of the Blues at the MCG.

Extremely bold headlines will be printed regardless of the result but, given the Pies have been able to play Geelong pretty well in recent years, I’m going with the home side.

The other mouth-watering clash this weekend comes in the form of GWS versus Essendon on Sunday afternoon. As far as hostile returns home go, Dylan Shiel gets off pretty lightly here. While I think the Bombers will finish three or four places above the Giants this season, I like the men in orange in this one.

A lot of eyes are on Melbourne to take the next step after their impressive 2018 season. The weight of expectation can be great, but they should really be able to account for a depleted Port Adelaide side facing external pressures of a different kind.

Adelaide probably start as the most heavily-favoured non-finals team ever playing a top four side from the previous season when they clash with the Hawks. I reckon predictions of a Hawthorn demise are coming just as much from pundits hearts as they are from their heads, and I’m picking Alastair Clarkson’s side to cause an almighty boilover in the Saturday twilight clash.

Brisbane get talked up against West Coast a lot I’ve noticed. Given they’ve lost their last eight matches against the Eagles by an average of 50 points, I’m not on the same bandwagon. The Swans will hopefully punish the Bulldogs for bringing those insipid Thor jumpers onto a football field in Saturday night’s other clash.

Sunday’s other matches should see St Kilda disappoint their supporters with a four-goal win over the Suns, while North Melbourne will edge themselves past an injury-riddled Dockers side.

Given previous AFL expert tips lead Josh Elliott had his ‘Lock of the Week’, we took a leaf out his book and continued that tradition in the form of the other Simpsons football analyst and his ‘Shoe-In of the Week’.

While the temptation is there to simply pick whoever’s playing Gold Coast, St Kilda don’t instil that level of confidence in me. Instead, I declare Richmond my Shoe-in of the Week. 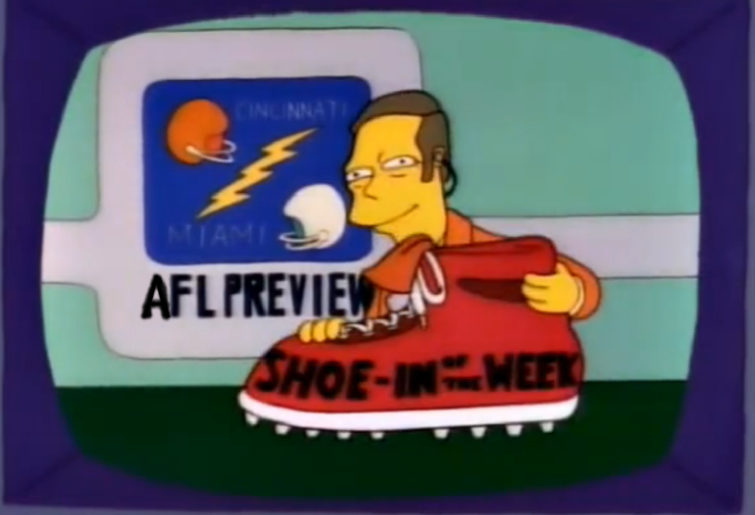 Tipping in Round 1 is very much the blind leading the blind because really, anything can happen. I’ve done my best to tip the winners and majority of these tips involve me being sucked in by the pre-season hype. Almost all of them.

Possibly the biggest surprise is tipping Geelong over Collingwood. I know it’s hard to predict a team’s season based on the JLT series, but I loved the look of the Cats. They had a ferocious attack on the ball, complemented by immense tackling pressure on the opposition.

This was particularly notable in their game against Essendon, when Geelong players swarmed the opposition each time they had their hands on the ball.

The Giants are my teams to watch this season and, while I expect the Dylan Shiel cup to be close, I also expect GWS to start their season off with a win. Same for Adelaide and the Dees.

On Sunday I had Fremantle over North in Perth, but with Jesse Hogan out of the side and with the current weather forecast in WA predicting mid-20’s, I’m changing it up and going with the Roos.

Richmond will start the season with a big win over Carlton for the sole reason it’s Carlton. Well, that and the Tigers are looming as the most dangerous side this season.

I’ll take Collingwood in a tight one over the Cats, while Melbourne should deal with Port Adelaide quite comfortably at the ‘G.

The Crows had a stinker of a year in 2018 and, like most other pundits, I’m tipping them to surge right back into premiership contention this season. A win at home over the Hawks looks likely.

Both of Saturday night’s games look relatively straightforward. Those horrid guernseys aren’t going to turn the Bulldogs into a team of superheroes, and Sydney should be far too strong for them, Lance Franklin or not. Brisbane are shaping as a big improver this year, but topping the defending premiers will be too much of an ask. 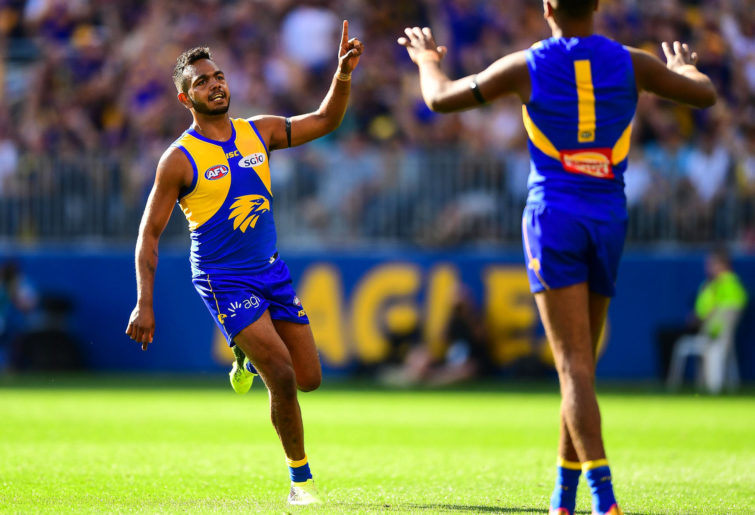 West Coast start their premiership defence off against the Lions. (Photo by Daniel Carson/AFL Media/Getty Images)

Gold Coast at home was always going to be a soft start to the year for St Kilda, and a couple of injuries for the Suns makes it even more of a sure-fire win for the Saints.

GWS versus Essendon is far harder to pick. Both sides should be firmly in finals contention, but I’ll err towards the home side and their scary good midfield. The popcorn shall be at the ready for Dylan Shiel’s Round 1 return to his old club.

Fremantle and North Melbourne are evenly matched. Had Jesse Hogan been available, it would have been hard to go past the home side, but with him on the sidelines, it’s the Kangaroos who I’ll tip to get the job done.

Rejoice, footy is back! For mine, there are three key games I’m wholeheartedly anticipating in this week’s suite of matches.

Friday’s Collingwood versus Geelong clash at the MCG is one of those. There seems to be a trend of late where Collingwood perms well against the Cats, even when the Pies aren’t at their very best. While I predict it’ll be close, I’d argue that Collingwood should pull off a first-up win to begin what could be a very successful 2019. Geelong can’t be counted out though.

The first of two Saturday clashes I’m looking forward too, Adelaide hosting Hawthorn, is also set to be an entertaining encounter. Adelaide’s 2018 was reasonably disappointing, but given their clean pre-season and arguably stronger side, I’d back them to defeat a Tom Mitchell-less Hawks outfit in South Australia. 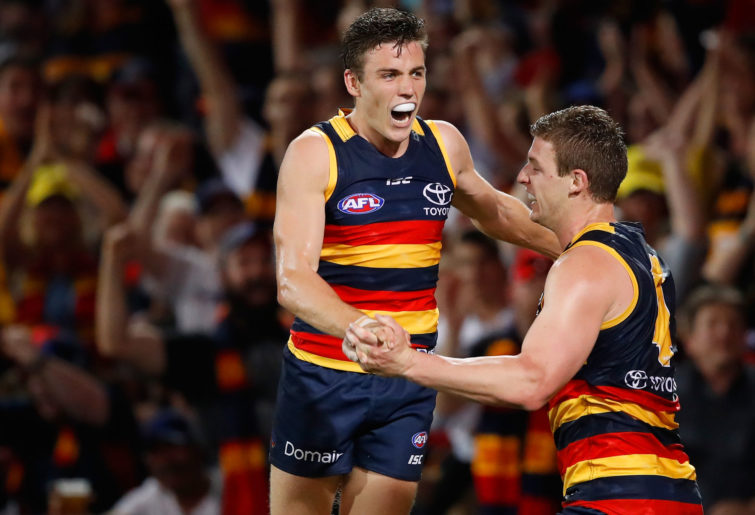 Can the Crows get back to the heights of 2017? (Photo by Adam Trafford/AFL Media/Getty Images)

Also, switching focus to Queensland, Brisbane host the Eagles. My heart screams Brisbane yet my head screams West Coast. My tip is the premiers will salute victory in a close one. Expect a big crowd nevertheless, and I would not be surprised if the rapidly improving Lions push the Eagles to the very end.

Outside those three games, there’s plenty of action to be had. Richmond should defeat Carlton in the season opener – colour me surprised if that doesn’t happen – Melbourne will defeat Port at the ‘G and I’ll back the Western Bulldogs to spring a surprise victory over the Swans.

St Kilda to get one of what might be very few wins of the year over a fledgeling Gold Coast outfit, GWS to use their home advantage to beat Essendon and Freo will take advantage of North’s defensive injury woes to win in Perth.