The Sunday games in Round 1 started with a bang and finished with a whimper.

After a thrilling one-point win by the Saints over the Gold Coast, Essendon were thrashed by Greater Western Sydney by 72 points, at that stage the biggest margin of the round.

This was followed, however, in the late-finishing game in the West where North Melbourne were beaten by 82 points.

The round was a tipster’s nightmare and cast serious doubt about the competitiveness of the Bombers and the Kangaroos.

The Saints welcomed back ex-Giant Josh Bruce who had not played since Round 3 last year due to an injury.

He served them well on the day with three goals and was ably assisted by Tim Membrey (two goals) who started his career with one game at Sydney before joining the Saints in 2015.

Hopefully, the Saints will be able to play these two key forwards in tandem during 2019.

Bruce’s three goals moved him up the Saints goal-kicking ladder and he passed Jack McDonald, a left-footer from Camden who played for the in the 1940s and ’50s, and the late heart throb Trevor Barker, who captained the club and won two best and fairest awards in his 13-year career from 1977 to 1989.

Membrey, who trails Bruce by only eight goals, also moved up the ladder drawing level with Austinn Jones. 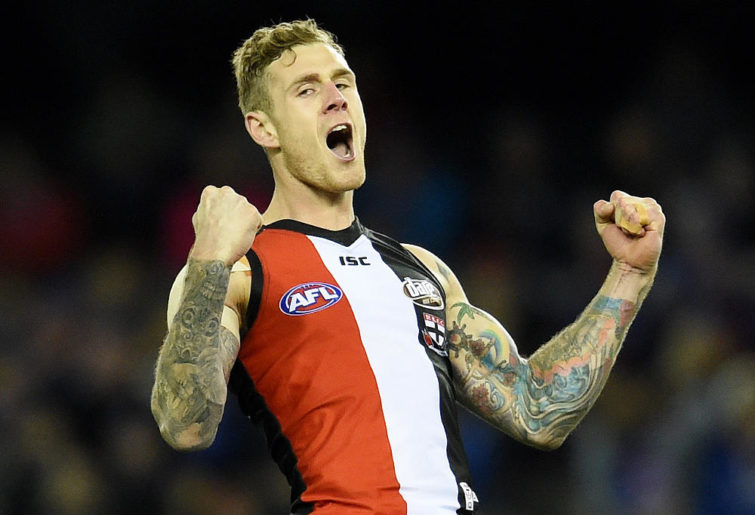 The Gold Coast welcomed two new goal-scorers to the list – Anthony Miles and Chris Burgess – and showed enough to suggest they will be competitive.

Greater Western Sydney certainly showed that they remain competitive with five multiple goal-scorers and a tight defence, aided by some poor kicking from Essendon.

None of Essendon’s current top 100 goal-kickers managed to score a major, and although new recruit Dylan Shiel was amongst the best players for the Bombers, they were completely overwhelmed.

The Fremantle demolition of the hapless Kangaroos was a display of football power starring Cam McCarthy.

McCarthy was the only new entrant into any club’s top 100 game players in Round 1, and he celebrated by kicking five goals, the equal best performance for the round with Justin Westhoff from Port Adelaide.

At a club with a relatively low bar to entry, the five goals were enough to see him leapfrog Matt de Boer, Zac Clarke, Gary Dhurrkay, Josh Carr and Hayden Crozier and finish just outside the Dockers’ top 50 goal-scorers, level with Steven Koops.

Koops was originally from the Northern Territory and played for the Dockers for eight years before finishing his career at the Western Bulldogs.

Michael Walters’ three goals resulted in him joining the Tambellup Wizard, Jeff Farmer, at No.3 on the all-time goal-scorers list for the Dockers with 259 goals.

For North Melbourne, the one bright spot was the performance of new recruit Bailey Scott who scored two goals, along with star full forward Ben Brown.