Deep in the heart of Texas, at a new venue for the sport, the drivers of the IndyCar Series put on a fantastic weekend at the state-of-the-art Circuit of the Americas in Austin, Texas.

The second race weekend of the season was a historic event in many ways. Here’s all you need to know from the first of two 2019 visits to the Lone Star State.

Will Power dominates, doesn’t win
It’s hard to have a more perfect weekend than the Australian did. He snatched the pole and led three quarters of the race – 45 of 60 laps – only to endure a late yellow, thrown for a spinning Felix Rosenqvist, and then a driveshaft issue put an end to his quest for the $100,000 bonus that COTA was paying for the polesitter to win the race. In the end a dominant couple of days was all for naught, and Power will be left wondering what could have been. In that regard, at least, maybe it was just as well that Australians couldn’t watch the race live. That sort of heartache before 6:30am on a Monday morning isn’t great.

Herta makes history
The beneficiary of the yellow that ended Will Power’s hopes of being the first IndyCar winner at COTA benefitted one of the sport’s great white hopes. Colton Herta, the son of former race winner Bryan, found himself at the head of the field following the only full-course caution and held off a few hard chargers in what had to have been an agonisingly long ten-lap dash to the line, knowing the calibre of the drivers behind him and remembering also that Herta’s Harding Steinbrenner Racing Honda suffered engine failure on Friday. That HSR team, featuring the motorsports nous of, among others, Al Unser Jr and Brian Barnhart, were surely on eggshells throughout the last sprint.

In the end Herta, so young that he couldn’t drink champagne during the podium celebration, took the twin chequers comfortably, becoming the youngest race winner in IndyCar history by surpassing the mark set when Graham Rahal won the first race of the reunified era in St Petersburg a decade ago. IndyCar had a good news story to take away from its first race at a venue many of us have long desired to see them race at.

Ultimately there’s nothing like an American winner to boost headlines. Throw in the fact that he’s the youngest ever, and that the podium was filled with Americans – St Petersburg winner Josef Newgarden was second, followed by Ryan Hunter-Reay – and that’s about as good a Hollywood-type script as IndyCar could hope to produce.

It was wonderful seeing the reaction to the Herta win from drivers up and down pit lane. It’s been a rough few months for Harding Steinbrenner Racing, who lost Patricio O’Ward when sponsorship didn’t materialise, so to follow all of that upheaval with a win in their second race as an IndyCar Series team has to feel especially good. I’m happy for them and especially for Herta, who represents so much of this sport’s future. Based on today, that future is in good hands. 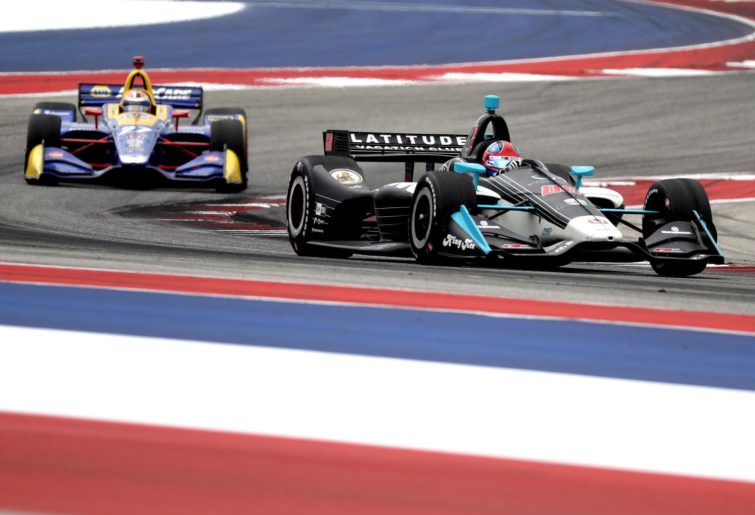 Passing galore
How good was the on-track product? By half race distance there were already more than 100 passes throughout the field. The COTA layout, which sharper minds than mine suggested would suit these cars, has a couple of great passing zones, and the track was aided by the push-to-pass horsepower boost that IndyCar has mandated.

Even as Will Power spent most of the race stinking up the show at the front of the field, I think the overall product was one that would please both IndyCar’s powers-that-be and those in charge at COTA. It’s a good foundation for an event that I hope hangs around for a very long time. One thing is for sure: the IndyCar race was far more entertaining than most of the Formula One races at the same circuit. Blah, blah, blah, they’re not as fast – channelling my inner social media complainer here – but at least the racing was more competitive. And that’s being polite.

Another P1 for Power
Will Power’s dash to the pole on Saturday, and in tricky conditions to boot, was the 56th of his glittering career. Basically, Power has made a habit of being fast on Saturday’s all his career and now finds himself just 11 behind the all-time leader in IndyCar Series poles, the legendary Mario Andretti. The way Power cranks out these stupefyingly fast laps on Saturdays makes me certain he’ll overtake the great Andretti in the next season or two. That would be a pretty nice thing to add to a resume that already boasts an IndyCar Series championship and an Indianapolis 500 victory.

Some luck for Hunter-Reay
And not before time, either. I was beyond thrilled to see RHR on the podium. Aside from a drought-breaking win at Detroit last year, the Floridian has had unquestionably the worst luck of anyone perhaps in the entire history of IndyCar racing – with apologies to the Andretti clan and their lack of success at Indianapolis – which really sucks because Hunter-Reay is one of the nicest and most genuine guys in the paddock.

It was telling that during the IndyCar Radio broadcast Mark Jaynes mentioned how it was unusual to talk about RHR and ‘good luck’ in the same sentence. I paraphrased a little, but what I’m trying to say is that Hunter-Reay more often than not finds himself in the position that Will Power did this race.

The crowd
In a few words, it was pretty good. Estimates have somewhere between 25,000 and 30,000 fans in attendance on Sunday. The problem with COTA being such a mammoth facility is that a crowd of that number, while decent in comparison to many IndyCar events – and certainly debut events – tends to get a little swallowed up. I’d love to see every grandstand full, but that isn’t realistic. That said, 30,000 is a decent crowd and a solid platform for future growth.

I don’t know how you couldn’t go home happy after that race – even if you happen to be a diehard Will Power fan – which is key for a new event, especially if you went, enjoyed it and decided to tell your friends around the water cooler tomorrow. If the race had been processional, the word-of-mouth factor wouldn’t be anywhere near as high. Hopefully a few F1 fans who stayed away this year will take note of the on-track product and buy a ticket for 2020.

One thing I wonder is whether the addition of a post-race concert would have enticed more people to the track. Rock band Muse played Saturday night, but if you’re a local and there’s a big-name outfit playing after the race, would you maybe be tempted to stick around?

Next up, Alabama
The series takes two weeks off before heading into the Alabama countryside to the undulating natural terrain Barber Motorsports circuit that has been the scene of some spectacular racing of late.