After a week, it's clear Bogut's return guarantees Golden State another title

Andrew Bogut has returned to the team with which he won a championship and is already having the impact they were looking for.

The 34-year-old Aussie played four seasons with the Warriors, most recently in 2015-16, and was a part of the 2014-15 championship team. Since his departure from the NBA, he has been a star in the NBL, playing for the Sydney Kings.

This year in his absence, Damian Jones started 22 of Golden State’s first 24 games before getting injured against the Detroit Pistons in December. Since then, the team has been short-handed in the middle.

This has given Kevon Looney the spotlight, as he has proven himself to be an integral part of the Dubs rotation. He’s not the flashiest player on the court, but does a fairly solid job protecting the rim and has significantly improved his ability to finish on the offensive side this season.

The other Warriors prospect, Jordan Bell, has unfortunately underperformed this season and has not reached expectations. This left Looney as the sole reliable centre on the lineup. That is until Demarcus Cousins came back.

Bogut has been back with the Warriors for four games, and they have gone undefeated since the return of the big fella. In these games, the former NBA champion is averaging five points, six rebounds and two assists in only 16.3 minutes per game. But the impact he is having is not one that is easily identifiable through basic statistics.

His main role on defence is to be a big body to clog up the paint. Golden State have had a shaky defensive season at the five spot, averaging 47 points given up in the paint per game. When they had Bogut in previous seasons, this number was down to 40, and in the games since his return, the average has been 38.7ppg.

The Warriors often prefer to stick with a small, offence-based lineup. The previously stated statistic regarding points in the paint shows that this strategy comes with a setback. Loss of size is an apparent weakness that, if attacked correctly, teams can totally take advantage of.

Bogut plays a unique role on the offensive end as well. The Warriors’ most commonly run play is the high pick-and-roll. If run correctly, it effectively creates space for their multitude of deadly long-range shooters to get open and make plays. 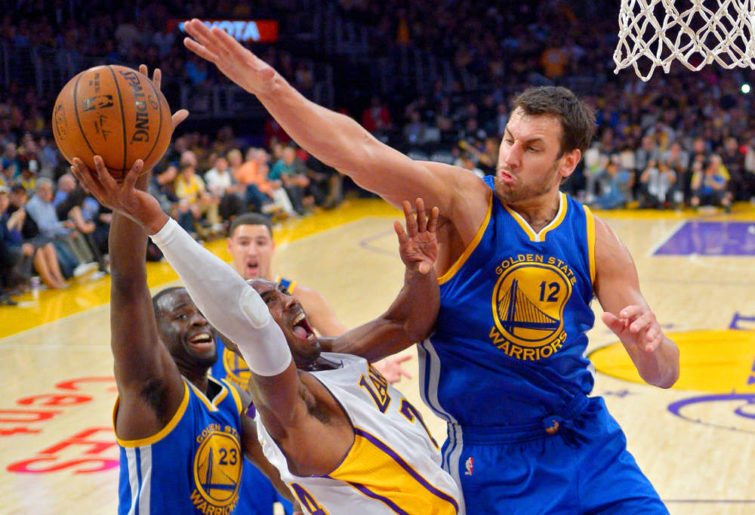 Bogut’s wide, 118kg frame provides a massive obstacle for defenders to have to work around while trying to keep up with the talented Warriors’ guards. This was part of the reason for the team’s grand success, before the addition of Kevin Durant to the squad.

Furthermore, none of the Warriors play with as much raw physicality as Bogut does. His reintroduction to the squad adds another element that was previously missing.

The main reason why Bogut is important for the Warriors is simply for depth going into the playoffs. The Warriors’ primary big man, Demarcus Cousins, has just come off of minutes restriction and his health is still uncertain.

Before reacquiring Bogut, the team had no good insurance policy going into the playoffs. Now they have a defensive presence to rely on in order to endure any unexpected playoff plot twists.

That being said, an argument could be made in favour of Kevon Looney being the secondary centre, and it will be interesting to see who gets more minutes come playoff season. Regardless of this, poor health can be a major factor and if Golden State wants their best shot at another title they must have ‘strength in numbers’.

Bogut will serve the Golden State Warriors on both ends of the court. He fills the defensive hole in size and physicality that was previously apparent and gives them another veteran with experience in the high-pressure situations that they should expect to face in April.

He is a solid form of insurance, who is familiar with the dynasty’s gameplay and culture which makes him an easy addition.

The decision to pick up Bogut is an all-upside investment which makes the Warriors an unstoppable force that is virtually impervious to most major misfortunes that they may face in coming weeks regarding their big men.

It ensures fresh legs in the existing players, takes pressure off of the defence by decreasing the number of mismatches available in the Warriors’ defence, and adds immense depth to the lineup. Not to mention that, since returning, he seems to be in the best shape of his career.

He probably won’t play as many minutes as his previous season in the NBA. He also won’t be the big fish that he was, in the small pond of the NBL. Instead, he will be a key asset and play a major role in contributing to the Warriors obtaining another ring this season.