Crusaders prove they're the team to beat

The Crusaders came off a disappointing 20-12 defeat against the Waratahs in Sydney last Saturday to defeat the Hurricanes 32-8 on Friday night.

On the other hand, the Hurricanes failed to bounce back from a difficult 34-28 home victory against the Stormers.

The Crusaders had the last three on the trot against the Wellington franchise and were looking to make it four in a row.

The last encounter resulted in the Crusaders defeating the Hurricanes at AMI Stadium, 38-22.

The venue for this encounter was Westpac Stadium, better known as ‘the Cake Tin’.

Both teams were on top of the New Zealand conference with 19 points and four wins, a draw and a loss heading into this encounter.

After a fast-paced opening five minutes, the Hurricanes scored first with a long-range penalty goal through the boot of Jordie Barrett.

The Crusaders scored the first try of the game in the 16th minute with the talented Will Jordan, scoring a try off the back of a smartly guided chip kick by No.9 Bryn Hall.

The next try was scored by fullback David Havili in the 24th minute. Havili put up a high kick and chased it. The ball bounced awkwardly for Hurricanes fullback Chase Tiatia, who couldn’t gather it, leading to Havili scoring the first of his two tries for the night. 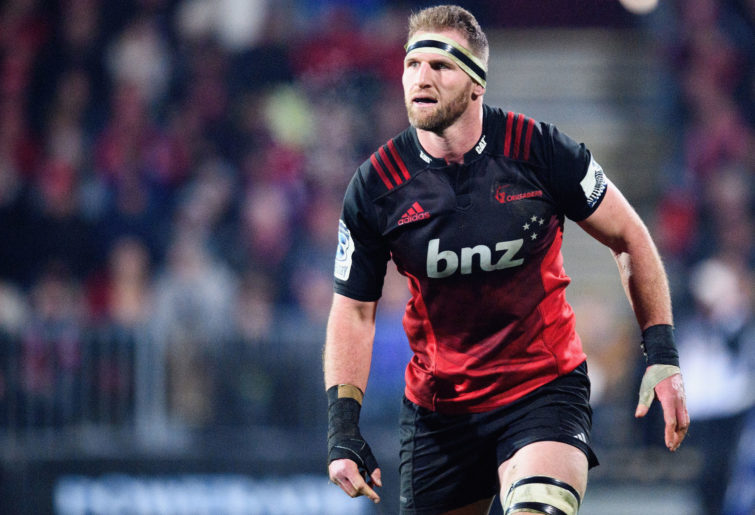 An injury to Kieran Read couldn’t stop the Crusaders brushing aside the Hurricanes. (Photo by Kai Schwoerer/Getty Images)

Matt Todd was sin-binned in the 31st minute for interference with the Hurricanes quick tap and two minutes later, the Hurricanes scored through powerful centre Ngani Laumape. The big centre barnstormed his way over the try line from close range.

It looked like it was game on from then, but the Crusaders hit back with a 35th minute Richie Mo’unga penalty.

Heading into half-time it looked like it was anyone’s game with the scores at 17-8.

In the second half, though, the Crusaders proved why they are favourites to make it three Super Rugby titles in a row, with a commanding second-half performance where they kept the Hurricanes scoreless and scored 15 points of their own.

The Crusaders also proved why they are the team to beat in this year’s Super Rugby competition.

In the 43rd minute, Havili scored his second try of the night and the 18th of his Super Rugby career.

The try was initiated by a Whetu Douglas intercept off a pass from Beauden Barrett and after multiple phases, Havili went over the try line.

The Crusaders were quick to score again with Braydon Ennor scoring in the corner off the back of a smart play from All Black centre Ryan Crotty and Whetu Douglas.

The Hurricanes had too many handling errors and conceded too many turnovers. These two factors really hampered any chance of a Hurricanes victory.

In total, the Hurricanes conceded 20 turnovers as opposed to the Crusaders’ 14 turnovers.

The stars for the Crusaders were David Havili, Scott Barrett, Richie Mo’unga and Whetu Douglas.

Mo’unga only missed one goal out of the six goals he attempted and in the process, reached 500 Super Rugby career points. He is currently third highest on the Crusaders’ all-time leading point-scorers list.

Whetu Douglas was also workmanlike in his performance, where he made ten tackles, three passes, five runs, ran 37 metres, made one clean break, and gave off one offload.

The Crusaders bounced back from last week’s loss. The Canterbury outfit put in a very professional performance and they will be looking to repeat this performance against the Brumbies next Saturday evening at AMI Stadium.

For now, they stay on top of the NZ conference as well as the overall Super Rugby standings.

The Crusaders are still the team to beat after seven Super Rugby rounds.

The Hurricanes, however, will have a tough assignment against the Highlanders at Forsyth Barr Stadium in Dunedin next weekend.