Hey Waratahs, welcome to NSW (you probably won't be back, hey?)

A team that call themselves ‘New South Wales’ went outside of Sydney!

It’s almost as though – and indulge me here, it’s ridiculous, but I’m just having a bit of fun – people live in parts of NSW that aren’t Moore Park.

And on Friday night, for the first time in the Super Rugby era – we’re talking 20-plus years – the New South Wales Waratahs were benevolent enough to play a competition game in a city that is home to a huge portion of what their name purports to be their base.

I know, I know, there’s no winning with me, right?

Many years ago I asked the question: “Isn’t it time the NSW Waratahs started actually representing the entire state?”

And now the Tahs bring a game to the Hunter, and I’m having a whinge.

But if the SFS wasn’t a building site right now, there is no chance they would have taken a game ‘away’ to what is obviously a home ground.

Whatever, we’ll take what we can get.

So what bone do they throw us? A fixture against the team that has been designated surplus to requirement.

It’s not NSW Rugby’s fault that the Sunwolves are getting the chop in 2020, but a big part of the reason the Japanese franchise are on death row is because they’re the competition easybeats.

Yes, yes, there’s more to it than that, but let’s call a spade a spade: the people of the Hunter were not given the chance to see World Cup winning legends. We got a side that had never won a match on Australian soil before.

As much was obviously apparent to the NSW coaching staff when they announced during the week: “As part of the World Cup player management agreement in place, [coach Daryl] Gibson has opted to rest Wallabies players Bernard Foley, Jack Dempsey and Adam Ashley-Cooper.”

So we have to play outside of Sydney’s eastern suburbs? Fine. We’ll give you a game against a team that suck and three of our best players will sit it out.

I’d be even more of a dickhead if I didn’t acknowledge the Sunwolves’ win – well done and well deserved, the doomed franchise finally scoring a victory in Australia.

But it’s the wrong kind of history.

This should have been 25,000 people watching the Tahs take it to Beauden Barrett and the Canes. Instead, a second-string side lost to the perennial wooden spooners.

Shockingly, only 12,000-odd people showed up. Which means the Waratahs as a business are probably thinking that it’s going to be a case of one and done – “We were right to never bring games to Newcastle, you don’t even care.” 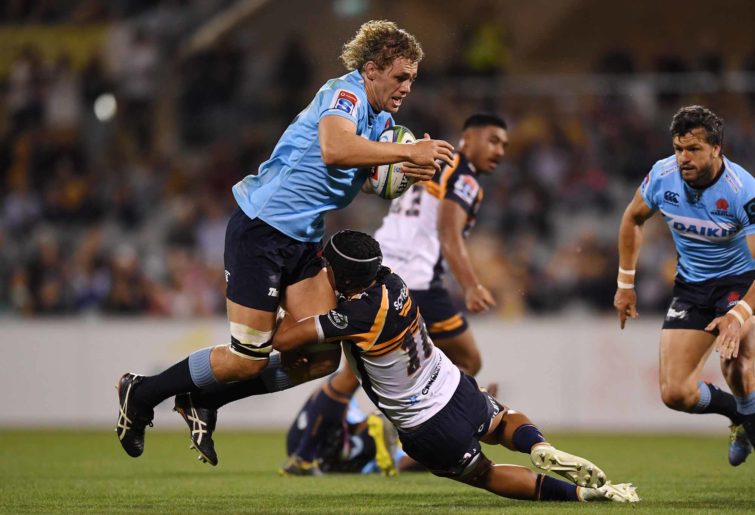 But if you’re selling a shit sandwich, is it a surprise when you don’t get many customers?

The kicker is that this is such an easy win for the Waratahs. I’m pulling my hair out here – it’s so. Fuckin. Easy.

A million-odd people live in the Hunter and we love watching people chase an egg-shaped ball. Doesn’t even matter if those doing the chasing aren’t crash hot – the Knights averaged 14,457 at home games in a year we won once!

And while it’s a league town, there’s a healthy appetite for rugby union – thousands are at the No.2 Sportsground when the Wanderers play Merewether Carlton (tens of thousands if Eddy MacDonald was soaring over blokes in blue to take line-outs).

So the idea that the Tahs are doing us a favour by turning up is beyond insulting, and using a term like ‘rural’ is ridiculous (apparently Bernard Foley was devastated to miss this game, because he’s a country boy – which is relevant because from the top of Braye Park you can see four cows).

Newcastle has one of the biggest populations in Australia. A Tahs game here isn’t an exercise in ‘giving back’, it’s a chance to make heaps of money by recruiting fans and sponsors in a city that has a skyline littered with cranes.

There are so many fish, just use decent bait.

The Waratahs need only turn up and show their fans a bit of respect. The latter was lacking this weekend.