The seven things I love about AFLW - part one

I have a shameful secret to admit.

And it’s not about that time I may or may not have posted a bulging eye emoji on a photo of Dusty Martin in his Bonds undies on a social media site – that’s a steaming pile of morality soup to digest another time.

I am ashamed that this season is the first season I’ve properly engaged with the AFLW. I feel like the washed denim jeans that missed out on the Sisterhood of the Travelling Pants. I’m sorry, Blake Lively.

I mean, I’ve done the ‘righty’ and paid for my $50 membership each year, displayed my inaugural membership certificate proudly at my workplace, and watched a few games, some even at our home ground.

But I couldn’t be more specific than “the blonde woman with the ponytail who goes barrelling through everyone” in my conversations.

Look at me string a list of proper names together. 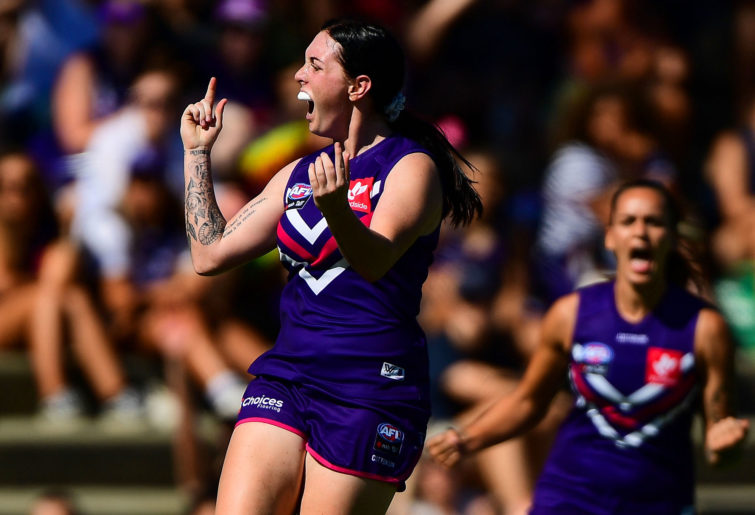 Anyway, because I finally paid proper attention to the competition, here’s the seven things I’ve come to love about the AFLW.

And they all conveniently end in ‘ity’ to make me appear cleverer than I really am.

Physicality
Kiara ‘Turbo’ Bowers demolished Geelong in Round 6, laying 19 tackles, and this was after she’d already earned labels like “absolute animal” and “beast mode” from the media.

That equals the AFL’s tackling record, and yet, Bower’s effort was still two off Ebony Marinoff’s record 22 tackles in a single match.

It’s not that I enjoy the biff, but I do enjoy seeing the girls go hard. Really bloody hard.

Much has been said about the players’ improved skill level. Effective disposals have increased over the three years of the AFLW, and this is even more impressive considering that contested possessions, and other statistics closely related to physicality, have also increased.

The girls are going in harder, but coming out better, and I’m lovin’ it all.

Personality
The closest I’ve ever come to watching tennis is Darcy Vescio’s video parody of the Australian Open ball kids that she posted on her social media pages.

I agree, Darcy. It’s not that hard! 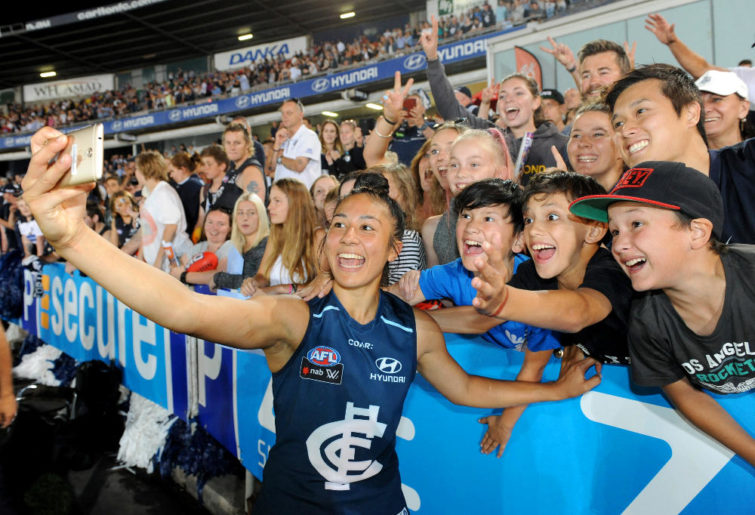 AFLW is overflowing with personalities.

Some of these personalities have been around for a while – think Susan Alberti, Susan Alberti’s hair, Susan’s Alberti’s brooches, which I hear even have their own Instagram page.

Others are relative newcomers such as the aforementioned Darcy Vescio, prolific Instagrammer Moana Hope, and adored girl-next-door Daisy Pearce.

Even more, I love how the girls show their personalities on and off the field. The two Aislings’ cheeky jig during the Pride Game on St Patrick’s Day comes to mind, as well as Kellie Gibson, Angelique Stannett and Kara Donnellan’s carpool karaoke attempt.

It appears that the girls have a little more freedom to express themselves, and I’ve enjoyed discovering who they are as individuals alongside who they are as footy players.

Opportunity
Equal to my love of watching Ashley Sharp when she gets into open space, switches on the NOS and propels herself to goals is my love of the opportunities that the AFLW has created.

The lack of girls’ teams to join has been the key hindrance to female participation in our beloved sport.

The AFLW has changed this.

Now I’m not great with numbers so I got a bit overwhelmed by what statistics were worth mentioning, but there was the 78 per cent increase in female club participation in NSW/ACT and QLD’s 70 new female teams.

Then WA’s 92,761 female players, and finally, that females accounted for 32 per cent of all footy participation.

By the time I waded through the data, what I gathered was that all the relevant statistical indicators prove that the AFLW has accelerated female participation and correlating team numbers.

The other element of opportunity that excites me is what will come of these female players who will have been able to play footy all the way from Auskick into the AFLW.

I can begin to imagine what these players will be like if I compare two of the Crows nominated for the AFLW Players’ Association MVP Awards, Ebony Marinoff and Erin Phillips. This season Phillips averaged 21.9 possessions and Marinoff averaged 23.3 possessions.

Phillips is 33 years old, and despite being a talented junior footballer, wasn’t able to continue playing after the age of 13 due to a lack of girls’ teams.

Marinoff, on the other hand, has had a fairly uninterrupted footy experience, and she’s only 21 years old.

Hell yes, Phillips is an extraordinary player – perhaps the most extraordinary female player of this footy period – but what will Marinoff be like with another 12 years of experience?!

Anyway, because I’ve only discussed three of the seven of my ‘itys’ and I’ve already hit a ridiculous word count, I’ll continue the rest of my list in a second instalment.

In the meantime, enjoy the AFLW grand final and more herstory in the making.