Why it's actually been a year to remember for Australian cricket

In the good old days, people writing stories would start with “Once upon a time” or maybe “A long time ago in a galaxy far, far away”.

If you look at the year from April 1, 2018 to March 31, 2019, just what has happened in Australian cricket that would justify these phrases?

Cricket Australia bowed to media and fan pressure to suspend David Warner, Steve Smith and Cameron Bancroft for up to 12 months.

They also decided to institute a review of Australian cricket, which was to prove the demise of David Peever, Pat Howard and a number of other Cricket Australia officials. James Sutherland’s resignation completed the clean-out many had been calling for.

All of this was a very positive move, because it got rid of an administration who were clearly out of touch with the game, the players and the fans.

The Longstaff Review highlighted how aggressive Australian cricket had become and how much a win-at-all-costs attitude was valued.

Again, this was not news to most, but the fact that it was out in the open forced CA to take positive steps to rectify the identified issues.

The code of conduct now in place has had beneficial effects across all levels of cricket and the message about excessive sledging at international level has clearly gotten across as well.

Tim Paine and Aaron Finch have taken over the Test and ODI sides and both have done a creditable job in managing improvements, particularly in player behavior.

It’s hard to recall any incidents involving an Australian player, with the odd comment from Paine to Rishabh Pant being the amusing exception. Both had led their teams on the field very well.

The Test side has become more settled in the past few months.

Joe Burns has come back and done well, Marcus Harris has shown glimpses of what sort of Test batsman he can be, Travis Head has improved enormously while Kurtis Patterson has started off his Test career very strongly.

Jhye Richardson has been a revelation, Nathan Lyon has kept getting better while Pat Cummins has justifiably moved to the top of the Test bowling rankings.

The ODI side has been simply brilliant in recent weeks, to the point where many are suggesting Australia could win the World Cup.

That obviously remains to be seen, but the improvement in guys like Adam Zampa, Pat Cummins, Usman Khawaja, Aaron Finch and Peter Handscomb – coupled with the consistent fireworks from Glenn Maxwell – means we’re a genuine threat.

Shield cricket cannot he ignored with Will Pucovski putting his hand up and so nearly playing his first Test.

Marcus Harris and Matty Wade cannot have done much more to impress selectors with 1000-run seasons, while James Pattinson and Peter Siddle have come good at exactly the right time – especially Pattinson, whose pace could be a major factor in the Ashes, especially if Starc doesn’t pull up fit.

Let’s not forget the three players who created what really has become a year to remember.

All have completed their punishments and judging by the crowds at club games, Australians have mostly forgiven them.

In return, Cam Bancroft made 138 not out in his return to Shield cricket, while both Warner and Smith have shown enough to suggest they are desperate to make runs for Australia and they’re in the sort of form that will let them do it.

They and the rest of the Australian players now have to work hard and create the ultimate fairy tale ending – winning both the World Cup and the Ashes.

Who’d have thought that possible on New Year’s Day 2019?

Could this catch on like “Bowling Shane”, or “Nice Garry”?

They must not have seen too much of Smudge to realise that his batting style has a lot of intricacies – but it worked for him, top-scoring for Australia with 57.

The Aussies were 3/11 at one stage before posting 152 from their 20 overs – but it was a day to forget for Marsh on his 30th birthday. 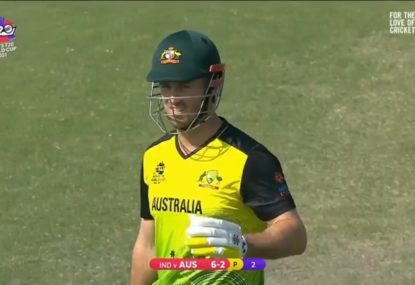