Rugby league fans, commentators and officials have an amazing ability to find a negative position on almost any aspect of the game while at the same time coming up with a problem for any solution offered to counter any challenge the game is facing.

This was on display last week in relation to the women’s game.

I was exceptionally disappointed to follow the narrative that developed over the last week in which some clubs that were part of the inaugural NRL Women’s premiership have apparently suggested that putting a team on the paddock for all of a month is too much of a financial burden.

Using parts of the press as their mouthpiece, certain clubs are claiming that the cost of running a women’s team is untenable in the current construct and the competition risks falling over after only one season.

A whole range of figures have been spouted, but on average it appears the cost of running a women’s team in NRLW is around $500,000 which includes a $50,000 entry fee. While this is not a trivial amount, it is worth noting that this equates to approximately 1/26th of an NRL club grant, about what a club would pay yearly for a handy male backrower.

Interestingly, one of the clubs that has been most vocal in its criticism of late is South Sydney via its general manager, Shane Richardson.

The cynic in me can’t help but think this may be a little case of sour grapes combined with a push to secure more funding from the governing body.

While some clubs publicly question the widely praised competition and its financial viability, I believe any club that hasn’t properly considered the opportunity around having a women’s team is missing a huge and unique opportunity.

Women are half of the population and the fastest growing influence group in rugby league. The women’s game has grown 29 per cent since 2017 and has almost doubled since 2015. While admittedly women’s participation in rugby league started from a small base, this sort of growth is still unheralded.

Armed with these statistics, club marketing and sponsorship departments should be heading into the marketplace and securing new and exciting sponsors – sponsors that previously overlooked the rugby league market as it didn’t appeal to their key demographic. 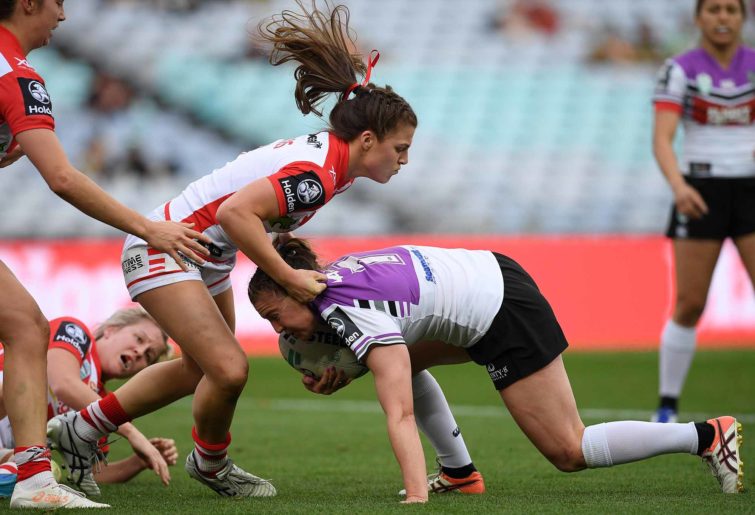 The rugby league landscape is rapidly changing. The fact that some clubs look to be going after the game using the media to secure more funding seems borderline petulant.

The inaugural NRLW season was widely seen as a success, and some players like Kezie Apps, Ali Brigginshaw, Talesha Quinn and Julia Robinson are fast becoming household names in league circles.

The four foundation clubs of St George Illawarra, Sydney Roosters, Brisbane Broncos and New Zealand Warriors should be heralded for backing such an amazing competition, but at the same time they need to understand that when comments about financial viability and commitment to the competition emerge in public it’s akin to an L-plater on a mountain pass – it halts almost all momentum.

We have to ask what kind of message these narratives send about the worth of the droves of young girls flocking to rugby league.

Now that the men’s season is underway it is refreshing to see the talk switched to something other than the off-season from hell, which pointed to some small sections of the game and their treatment of women, yet the stench still hangs around the game like an unwanted step-cousin at a family gathering.

The women’s game stands in stark contrast to this controversy – it is almost nothing but good news stories and excitement for the future. You only have to view or read an interview with any of the players in the competition – they emanate passion and love for the game whenever asked. It’s a far cry for entitled millionaires dragging their feet to spout cliches to a desperate media.

It isn’t work to these wonderful athletes; it is very much a labour of love. Their work week starts when they drag their sore muscles out of bed on a Monday morning and join the workforce like the rest of us.

At a time when both soccer and the AFL have had unique challenges around their own women’s games, NRL clubs need to realise that this is an opportunity and awesome privilege to be part of an amazing competition which, if done right, will only continue to grow.