Death-match at the MCG

The anticipation is already building. The excitement is palpable. Rarely have we seen a match of the round like it.

No, we’re not talking about the grand final rematch between Collingwood and West Coast on Saturday night. We’re not even talking about Brisbane hosting Port Adelaide, both unbeaten, for potential top of the ladder rights.

GWS and Richmond is a huge game, both teams decimated by injury and trying to stay ahead of the ledger. And Geelong kicks off the round by flying into Adelaide and taking on the Crows, but that’s not it either.

You know the one. Friday night football, the biggest stage. The MCG, the home of our national game. 17th versus 18th. Melbourne versus Essendon. A fight to the death.

This will be no ordinary meeting of cellar-dwellers.

Melbourne were a heavily-picked premiership fancy in the pre-season, and why shouldn’t they have been? They were the top scoring side in 2018, with a game built on toughness around the footy, the type of brand that is purpose-made for finals.

The finished fifth, and won two finals before their run ended at the hands of eventual premier West Coast in Perth.

Max Gawn is seen by many as the best ruckman in the game. Clayton Oliver the best mid aged 21 or under. Angus Brayshaw is coming off a third in the Brownlow. Tom McDonald finished top five in the Coleman in his first year as a forward. Steven May traded in to bolster the defence.

The curse of Norm Smith would finally be lifted.

Essendon were the spruik side for most of the summer, as is often the case with that club, especially once they landed Dylan Shiel in trade week. His explosive class was just what the Bombers needed to top them off for a flag tilt.

Joe Daniher was coming back. Orazio Fantasia would play more games. They won 10 of their last 14 in 2018. The surge was on. Destiny beckoned.

And now here we are, both sides winless after two matches, squaring off to bury the other’s season before it even begins.

In Melbourne’s slight favour is that they have lost both matches to teams that are still undefeated. Port Adelaide took care of a spirited Carlton at home after their emotional victory over the Demons at the ‘G in Round 1. Geelong preceded their 80-point demolition of the Dees with a gritty win over Collingwood, who may well be the team to beat this year.

Still, while lots of teams don’t come out of Kardinia Park with a win, most of them have more than three goals to their name by three-quarter time.

Talk is starting to gather about how underdone several Melbourne players are. Off-season surgeries, late start to the pre-season after making a prelim, etc. If you’re underdone as a team in Round 1 and Round 2, why won’t that still be the case in Rounds 3, 4 and 5? How long does it last? How much can be forgiven?

If Melbourne starts 1-5 and misses the finals on percentage, is that acceptable? Does everyone just shrug and say “oh well”? Clubs need to be better than this.

But it is true that the Demons players are lacking run. The youth and speed of Port ran rings around them to start the season, out-spreading them easily from stoppages. If you breakeven with the Dees in there, they can be easy to get on the outside.

Against Geelong, it wasn’t so much lack of run as it was the lack of fluent or precise ball movement that brought Melbourne undone. They just couldn’t find a way to penetrate the Cats backline, who rebounded the ball out at will. At the other end, Geelong barely met resistance when going inside 50.

As bad as the Dees have been, Essendon has been worse. Fancy being a $3 underdog against a winless team coming off an 80-point thrashing.

While Melbourne have seemingly been exposed on fitness, structure and perhaps tactics, Essendon appears to be lacking good old-fashioned heart.

The Bombers have been held goalless in both first quarters so far, a symbol of their lack of spirit. There has been a clear lack of intensity from the opening bounce on each occasion. In both matches they’ve been the best part of five goals down before landing their first major. 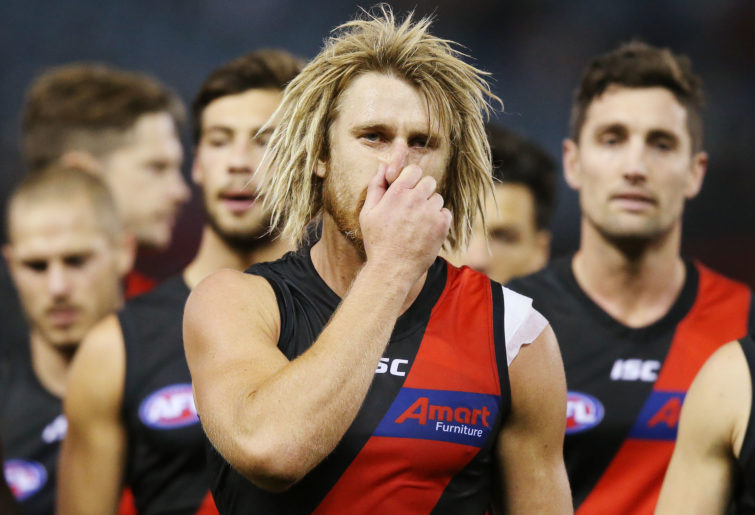 St Kilda kicked 2.7 in the opening stanza on Saturday, missing several shots that most AFL players would expect to nail. Not to denigrate the unbeaten Saints, but a better team may well have been 40 points up at quarter time instead of the 17 they were.

To be fair to the Dons, they responded after quarter time, but still had patches of aimlessness, where the players went into stat-gathering self-preservation rather than playing with any cohesive system.

John Worsfold has never been considered any sort of tactical mastermind, but footage of him staring aimlessly into the distance with ten minutes on the clock and his team two goals down wasn’t inspiring. It didn’t look like a man of zestful confidence, replete with ideas.

Several players wandering past a ball in play to get to the bench couldn’t have been more symbolic of a club in disarray, lacking unity and focus.

Melbourne’s midfield is its strongest area, and they’re tough. Essendon’s midfield is a weak area, and can play soft. If they let the likes of Oliver, Brayshaw and Viney smash them up, it could get ugly. And if they are losing clearances and the flow of general play, the Dons aren’t playing with the sort of confidence that is going to see them turn rebound 50’s into scoring threats.

But the Demons have more baggage and weight of expectation. It doesn’t always sit easily. They will note that a lot of their players played roughly to their level of ability on Saturday against Geelong, yet all they had to show for it was six goals and an 80-point loss.

Who is this joke going to be about come 10.20pm on Friday night? I think Essendon will once more be the laughing stock.