Off goes the alarm.

You awaken, yawn, stretch and steadily rise out of your comfy winter bed.

Shuffling to eat some breakfast, your bleary eyes take some time to adjust to the early morning.

Following a shower and getting dressed, you are off to work. Like any other person, you’ll be stuck in traffic, eventually rolling your way to your destination.

All summer you have been preparing, toiling for this time of year.

Going into the season, things don’t go right for you. You have a bad fortnight at work – what would you expect?

As an AFL coach, millions of people are baying for you to be sacked immediately, with the pressure surrounding you growing by the day.

In years gone by, there was such a thing as a ‘bad start’ to a season. Even if laden with pressure, teams could undergo an early form dip as they found their groove and worked their way into the season.

In the media hurricane that we currently sit in, there is no time.

You’re expected to go and go, winning early, winning during the middle rounds and also winning at the end.

If you make the finals, then you ought to win. Considering there’s only one team that can win, 17 other clubs will be disappointing people, unless they have been a real surprise packet.

Unlike the majority of AFL fans who believe that John Worsfold should be sacked after Essendon’s horror two rounds where they have lacked discipline and intent for a side looking to challenge for a premiership, I disagree.

It isn’t ideal, but it can happen.

Two games can easily be made up, and form can turn around in the click of a finger.

But now that the avalanche of pressure and hype has descended upon Worsfold, it will most likely never change.

They don’t have the room to think clearly and rejig their structure. To change up how they train and instil some fun – and if they are seen laughing, they will be swiftly condemned for taking the situation lightly. 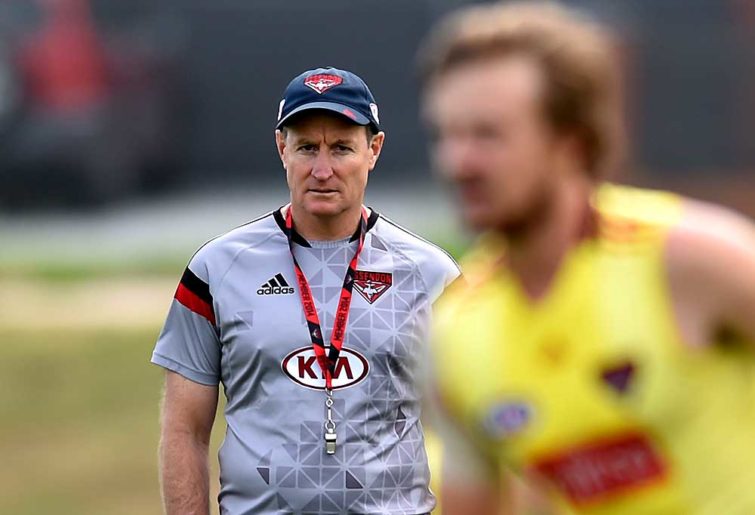 AFL fans criticise football for that code’s quick dismissal of managers if they falter for only a handful of games when the expectations are placed on them.

Right now, we are turning into them.

Maybe it’s a sign of our times, with technology and life moving at such a fast pace that we expect results at the snap of a finger or a tap of our massive iPhone screens.

People expect Essendon to just click out of it and start playing the footy that everyone thought they would.

It’s like people think the entire club aren’t trying their hearts out to rectify the situation.

The funny thing is, Melbourne are looking just as dismal so far, but because they performed well last year they have a little bit more leeway.

On the other hand, because Essendon are slowly warming up and have no runs on the board, they are being hunted by a pack of media wolves.

Essendon’s first two rounds have been a horror show. They have been downright embarrassing and have disappointed members.

History says that – albeit rarely – teams can easily make the finals and challenge for a flag after losing the first two games.

It happened to Collingwood last year, but they had a slight bit more breathing room because they weren’t built up externally as a top-four contender.

And that isn’t any club’s fault. Essendon and Worsfold can’t be blamed for the hype surrounding them.

So let him coach and let the players play with a smile – they will compete their heart out.

If the state of Essendon is still this low by Anzac Day, then maybe it’s time to talk.

But a fortnight isn’t long enough to harass a coach into submission.