Halfway to heaven: The Will and Quade show rolls on

Who can imagine Eric Morecambe without Ernie Wise? Who can think of HG Nelson without summoning ‘Rampaging’ Roy Slaven in the same mental breath?

Roy and HG are the inventions of Australian comedians Greig Pickhaver and John Doyle. Their sports parody show was syndicated around the globe as The Dream with Roy and HG during the 2000 Olympics, and it was one of the reasons the events in Sydney were so enjoyable.

Who can forget the Greco-Roman wrestling with a Barry White-backed soundtrack? Or Fatso the Fat-Arsed Wombat, who turned out to be so much more popular with the public than the official mascots of the Games – dubbed ‘Ollie, Millie and Dickhead’ by Roy and H.G.

Fatso appealed to the earthy Australian sense of humour, reacting against overblown pretension like a cat on a hot tin roof. He was nicknamed “the battler’s prince” and was smuggled on to the dais with swimming gold medal winners Michael Klim, Grant Hackett and Susie O’Neill, as well as the entire Australian 4x100m men’s relay team at their medal ceremonies.

Fatso was the conscience of that Olympic Games – a reminder not to take sport too seriously. He left a little something on the running track and at the closing ceremony, the show’s coverage finished with Fatso extinguishing the Olympic Flame with his oversized derriere. He was subsequently bought at auction by the Seven Network executive chairman Kerry Stokes for more than $80,000.

Here is Roy and HG’s summary of Australian sport in 2018:

“And these great heroes we have representing us on the field of battle… none of them can bat!” Rampaging Roy explains, as if to reinforce the lack of reverence for so-called sporting icons.

When the chemistry is right, the impact of a great partnership can far exceed the sum of its parts. The mechanics are a mystery, but certain personalities fire off each other and are stimulated to produce better results than they do as individuals.

Coaches are always on the lookout for combinations which generate that special synergy on the field of play.

Think of cricket’s great partnerships, which always seemed to work better when they were together than when they were apart – Bill Lawry and Bob Simpson come to mind, as do Jeff Thomson and Dennis Lillee.

Nobody who has seen Will Genia and Quade Cooper playing together in the halves can be in any doubt that the synergy of the combination surpasses their (already high) standard of performance as individuals.

Genia had a stint in French rugby which is best characterized as unremarkable, while Cooper endured the torture of a Brad Thorn-inflicted limbo on his playing career in 2018. 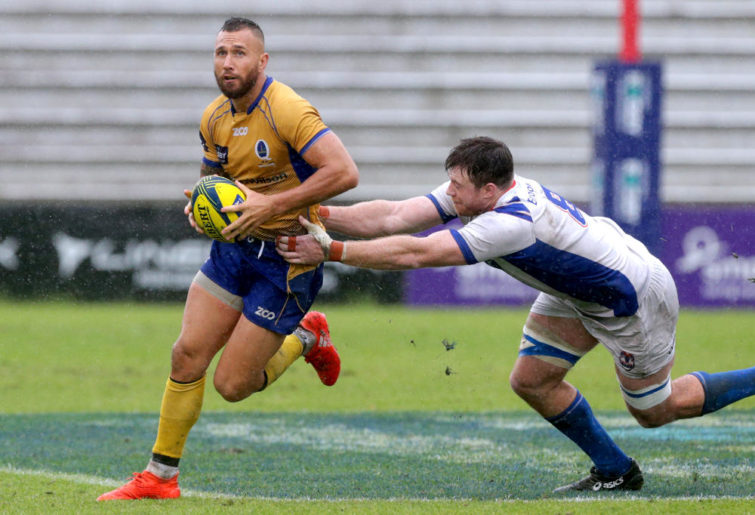 NRC was about as interesting as it got for Quade Cooper last year. (Loryn Ettridge/Rugby Australia)

Both were wandering ronin – warriors without a master – before they found their way back to the same home at the Melbourne Rebels.

Now, the spark has been most definitely been re-ignited, and the flames are being fanned. Now, Will Genia and Quade Cooper are playing the best rugby of any halves combination in Australia, and they are doing it with a distinct lack of reverence for those who pronounced their careers as all over.

The sheer enjoyment they derive from playing as a pair is impossible to miss:

The results in attack tend to be far more obvious with ball in hand than they are on defence: Genia passes to Quade, Quade launches the cross-kick and Jack Maddocks scores at 0:32 on the highlight reel; Genia subtly fakes to the blindside attack from maul at 1:28, persuading his opposite number Tate McDermott to split out and allow Anaru Rangi to plunge through the middle and score.

But it is on defence, and in their application to the physical tasks of the game, that Genia and Cooper’s contribution have been most impressive.

There is a hint of that application in Cooper’s dribble out of defence to create a second try for Maddocks at 2:12 on the reel, but it is only a hint.

Here is the real substance. It starts with defence in the front line from scrums:

In the first example, Genia gets a crafty foot in between McDermott’s hands as he goes to pass – and it was not the only time this type of intervention proved crucial. The bouncing pass encourages Cooper to get up in the face of Duncan Paia’aua and force an error.

In the second instance, Cooper stands up to take Scott Higginbotham as he rumbles away from the base. He takes him high and front on, and strips the ball away in the tackle.

In the third, Quade flattens Samu Kerevi and even attempts a jackal for good measure! The Reds took the hint and stopped running down the channel of the Rebels’ number 10 after that.

But Cooper and Genia’s work from the defensive backfield was even more impactful than it was on the front line:

At the beginning of the clip, Genia is defending on the right end of the line with Jack Maddocks behind him. The Rebels want the two to swap roles, and it is often a transition fraught with danger for the defensive team, but Genia and Maddocks manage it seamlessly. At the end of the sequence, Will Genia is playing right fullback and Quade Cooper is his partner on the left: 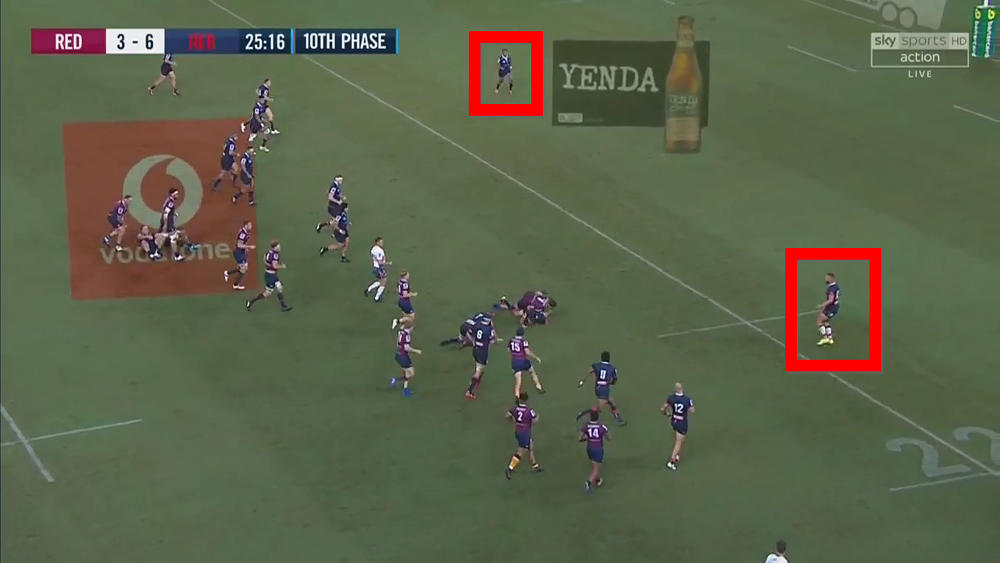 This formation was a feature of the Rebels defence: 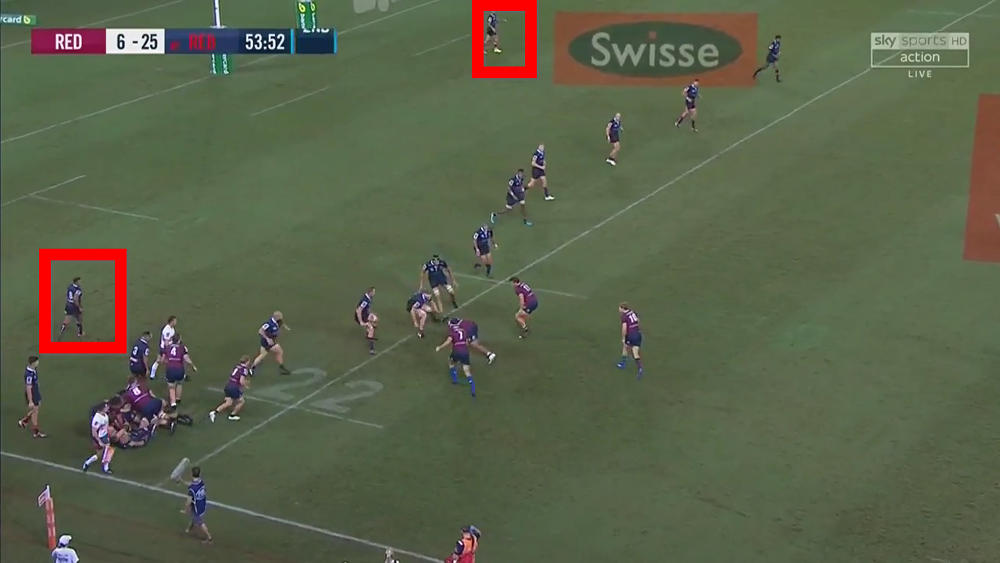 Both of the Melbourne halves managed their defensive duties from the backfield with grit and determination:

Sefa Naivalu has already beaten both Maddocks and Rangi on this kick return before Cooper brings him to earth with a good tackle. Genia is on hand not only to take down Lukhan Salakaia-Loto after the offload, but also to do the hurtful thing. He puts his body on the line by diving over onto the loose ball, conceding the penalty in order to avoid a fate far worse.

Cooper and Genia’s positioning in the backfield permitted them to see the field and make a strategic choice. At Suncorp, that meant pinning the Reds back in their own red zone with the kicking game:

The most definitive sequence occurred in 59th minute, after a break close to the ruck by Reds number 9 McDermott.

In the first part of the sequence, Genia dumps McDermott after the break, while Cooper backs off to buy time for other Rebels defenders to regroup. He gets in Samu Kerevi’s way after he receives the ball in support, and makes another long on-ball sally to delay release on the next phase.

On the next phase, Cooper is already back in action, making a low cover tackle on Sakalaia-Loto out near the left sideline:

The sequence appears to end with a try for Reds replacement hooker Brandon Paenga-Amosa – but appearances prove deceptive. Upon review, it is Will Genia, doing the unseen work to dislodge the ball from McDermott’s hands and force a knock-on, who is the battling prince of the play.

Summary
Partnerships develop synergy over and above individual abilities. You can see it in sport, and even in comedy duos.

The popularity of The Dream with Roy and HG effectively supplanted the officially approved Olympic mascots with Fatso the Fat-Arsed Wombat. Not only the sporting public, but even the competitors themselves embraced the raucous irreverence of Fatso.

Similarly, the true sporting icons are the ones who are prepared to start again and rewrite their own history when most are happy to write them off. They have earned the right to raise the middle finger to their critics.

Will Genia and Quade Cooper are doing just that at the Melbourne Rebels in 2019, and not just with the quality of their attacking play, which has always been out of the top drawer.

They are doing it on defence, and in the small but vital physical moments of the game. That, more than anything, illustrates the spirit of revival in their play as a pair.

Both are halfway to heaven, the heaven of a joint appearance at the World Cup in Japan later in 2019. Whether they make it to the upper reaches of the firmament will be for others to decide, but their rugby is doing all of the talking right now.